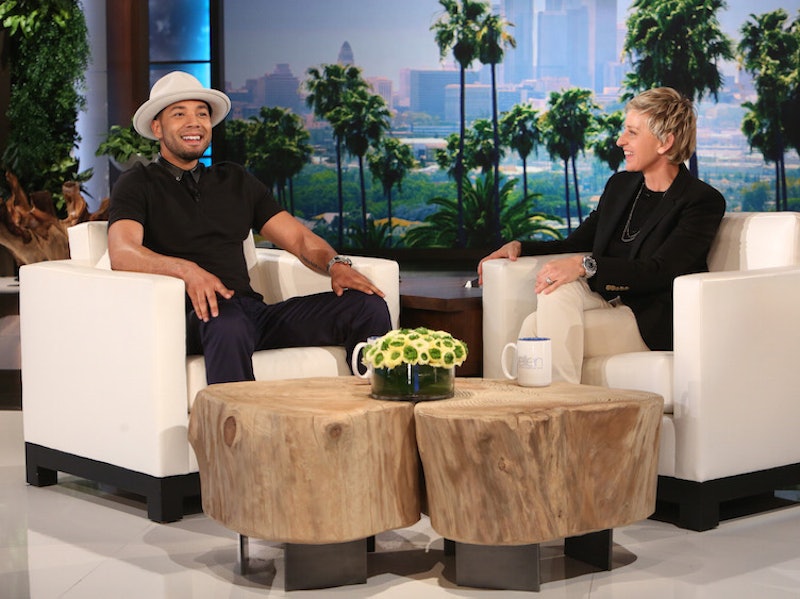 Congratulations are in order for Jussie Smollett, who plays Lucious Lyon's son on Empire. On Monday, Smolett publicly came out as a gay man in an interview with Ellen DeGeneres. This was an especially important moment because it mirrored Smollett's character Jamal Lyon's own coming out on the show, and it was an issue he'd skirted in his original interview for Ellen. DeGeneres had asked him what was going on in his personal life, and Smollett had talked his way around the question without addressing his own sexual preferences — a legitimate and understandable choice. However, after he'd filmed, he knocked on the door of DeGeneres' dressing room and said he had more to share.

Smollett hadn't wanted to open up about his personal life in front of the live audience, because he didn't want it to take away from his promotion of Empire, but he still felt it was important to him to clarify a few things:

It was really important to me to make sure that it got across that there is no closet. There’s never been a closet. That I’ve been in. I don’t own a closet, I got a dresser, but I don’t have a closet, but I have a home and that is my responsibility to protect that home.

Definitely an understandable choice when you're in the media spotlight. That's why it's all the more impressive that Smollett gave us a glimpse at his true self:

So that’s why I choose not to talk bout my personal life. But there is without a doubt, no closet that I’ve ever been in, and I just wanted to make that clear, but it was most important for me to make that clear to you on your show at this time in the world. And that’s where I’m at. So lets not read into it the wrong when I say that I don’t talk about my personal life, I’m saying that. But it is in no way to hide or deny who god made me. Ya know?

Smollett selected Ellen as the outlet for his revelation because of DeGeneres' courageous, groundbreaking, trailblazing move to come out as a lesbian in 1997, putting her career and success on the line in order to be honest with the world about who she is. Her decision opened doors for the countless LGBT youth who've succeeded her, Smollett included. Hopefully someday we'll get to a point where there won't be any stigma to homosexuality at all, let alone the kind that DeGeneres faced in 1997, but, until then, Smollett says he's happy for the opportunity to share with the world what his family and friends already knew:

My mama knows. My Mama likes me a lot. And yes I take her to the Sound of Music sing-along every, single year. So, any questions? But you know honestly, we’re humans and we love and we do all that good stuff. So I’m honored for this opportunity and I’m honored to be here with you.

Smollett's decision, and the words he chose to share his true self with the world, will stand as an inspiration to fans of Empire and to fans of Smollett. And, even if they aren't fans, it's great to see yet another celebrity that LGBT youth can look to as a role model as they make their own journeys through life.