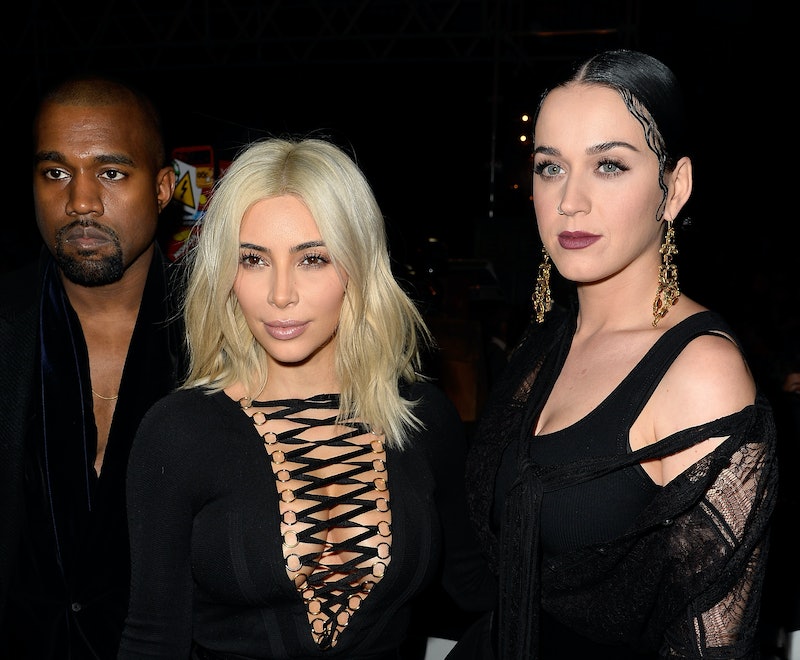 Holy cow. Kim Kardashian made headlines everywhere by going blonde last week (she debuted the new look at Balmain, alongside a good chunk of the Kardashian family), but she's just upped her game considerably: Because, as it turns out, blonde was just a rest stop en route to platinum — we're talking Khaleesi-level white hair (the look was apparently inspired by Madonna). It makes sense: After all, if you have dark hair, stylists usually recommend to do the process over multiple salon trips — so Kim was actually being hair-healthy (and just so happened to nab two-for-one headlines along the way).

She debuted her new-new hairdo at Givenchy (another designer friend of the Kardashian-Wests), and she kind of managed to upstage everyone and everything. I mean, if you're going to go platinum, you might as well reveal the look in a show-stopping, cleavage-peeking number at one of the hottest shows in all of Paris Fashion Week, eh? Suffice it to say, Kim K is doing things right — and in honor of that, let's take a look at 9 folks who are getting platinum blonde completely right, too. Let's start with Kim, because of course:

You know you're fab when you manage to upstage Katy Perry (though Katy's rocking a mean purple lip, it must be said).

Jared was a fellow headline-maker with his near-unrecognizable new look (which he also debuted at PFW).

As long as we're staying on the fashion week side of things, it should be acknowledged that model Soo Joo Park's platinum game is seriously on point.

No list of platinum blondes is complete without Draco here.

No, wait, Debbie Harry did! Too much fabulousness has caused my brain to short-circuit.

Rock icons aside, Iona from Pretty in Pink had one of the strongest hair and beauty games, ever.

Mother of Dragons, Protector of the Realm, Breaker of Chains... and Possessor of Really Great Hair.