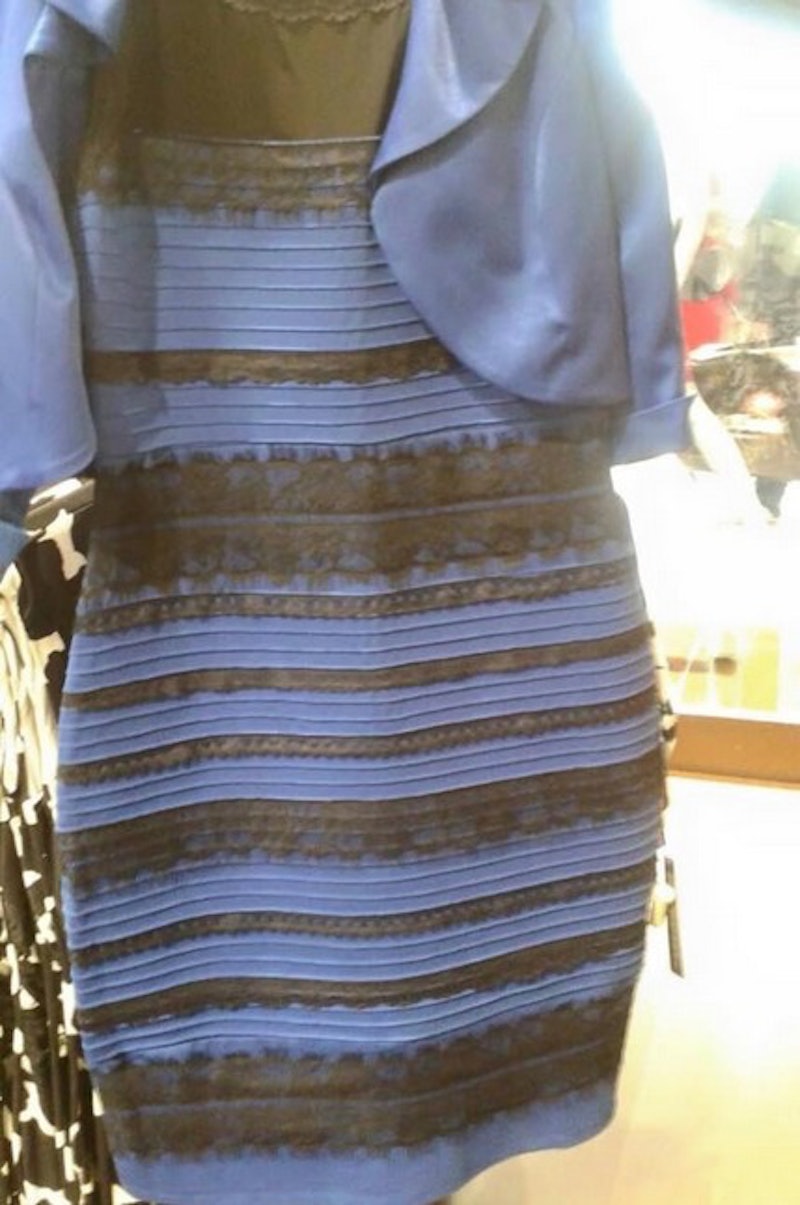 Although the furor about The Dress has died down somewhat since it first made the Internet explode a week and a half ago, we're all still weirdly fascinated by it. As such, it's not exactly surprising that the Farnsworth Munsell 100 hue test has started making the rounds again — even though we know the science behind The Dress, a lot of us still have internalized exactly how it was perceived so differently by so many people. So, since I'm always willing to offer myself up as a guinea pig in the name of weird online tests, here's the lowdown on the Farnsworth-Munsell 100 hue test and how it might fit into the phenomenon of The Dress.

The Farnsworth-Munsell 100 hue test was developed in the 1940s to test the human visual system. An improvement on the Munsell Color System, which was first put into place at the beginning of the 20th century, it's commonly used to diagnose color blindness (according to the non-profit Color Blind Awareness, one out of 12 men and one out of 200 women have some form of color vision deficiency). The test consists of 100 colored squares divided into four groups of 25: The first group covers orange/magenta hues; the second, yellow/green hues; the third, blue/purple hues; and the fourth, purple/magenta hues. Originally it was taken by arranging physical tiles representing each color into four rows; in this day and age, though, taking it is as simple as dragging and dropping digital versions of the tile into the correct order. Failures are measured as a function of two factors: The number of instances of misplaced tiles, and how far away a misplaced tile is from where it should be placed. One you've taken it, you earn a score between zero and 100. Zero is the absolute best — that is, you're able to differentiate all 100 hues perfectly — and 100 is the absolute worst — as in, you are likely completely color blind.

I've taken the Farnsworth-Munsell 100 hue test before, but since I don't remember what my original score was, now seems like a good time to revisit it. In an ideal world, I would have taken it in laboratory conditions with a specialized monitor; however, given that the full kit can often cost an absurd amount of money, I limited myself to taking it at home using my work computer (an ASUS Zenbook, for the curious). Here's what the display looked like before I rearranged it:

And now for the moment of truth…

Well! That's somewhat unexpected; I kind of felt like I was starting to go cross-eyed by the end, so I was anticipating a significantly worse score. I also had trouble with the green-blue spectrum, so I'm surprised I seemed to do fairly well with it. It looks like I have the most trouble differentiating purple/magenta shades.

For the curious, here's what the results commonly look like for people in my age group:

OK, so technically I'm not 30 yet; since I've only got a week to go before I hit my third decade, though, rounding up seemed like the thing to do. Interestingly, though, the comparison is dramatically different from the 20-to-29 age group:

The low score is somehow in the negatives, but the high score is also much higher. I'm not sure what could account for the range being so much wider, but if you've got any ideas, I'm all ears.

So: Here's the thing about The Dress. Although we know that the reason some people looked at that picture and saw white and gold, rather than blue and black (because in case you missed the memo, it is blue and black), is due to how their eyes and brain processed the way the light was hitting the garment at that particular moment… I am overwhelmingly curious about whether that difference in processing correlates with forms of color vision deficiency. Until someone does a study specifically focusing on it, we may never know, so… any volunteers?

Take the Farnsworth-Munsell 100 hue test yourself here. Let us know your results!