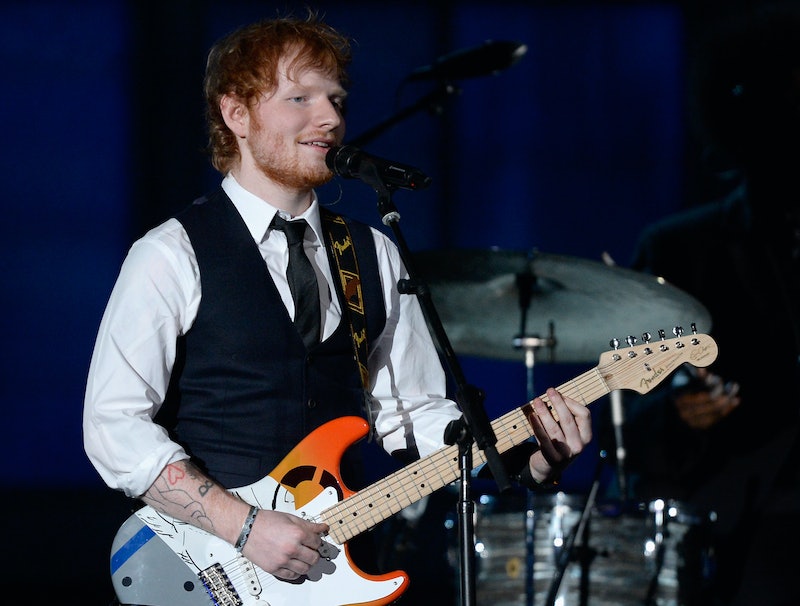 We already know that Ed Sheeran is one of the coolest celebrities in existence, so it's no surprise that the red-haired singer also happens to be one of the most charitable. It was only a month ago when the "Thinking Out Loud" pop star performed his hit song at the Grammy Awards, where he was also nominated for Album of the Year, and now it's been reported that Sheeran donated his entire Grammy wardrobe to charity. The St. Elizabeth Hospice in Framlingham, Suffolk, England received eight items of clothing from the 24-year-old hitmaker and all of them were from his most recent Grammys appearance in Los Angeles. Sheeran's mother Imogen brought the clothes back to the U.K. and gave them to St. Elizabeth.

"We're so lucky to have Ed's support, and we're sure that these latest donations will be quickly snapped up by eager fans," the hospice shop's manager Rachail Pollard told The Mirror. "If you'd like the chance to get hold of a unique piece of Ed Sheeran memorabilia, I suggest you pay us a visit as soon as you can."

The St. Elizabeth Hospice provides care and support to those living with a progressive illness in Suffolk and nearby areas. Sheeran's family are longtime supporters of the organization and the singer himself donated bags of clothes last year, which helped raise more than $6,000. To find out how you can donate to Sheeran's favorite charity, visit stelizabethhospice.org.uk.

Watch one of Ed Sheeran's 2015 Grammy Awards performances below: