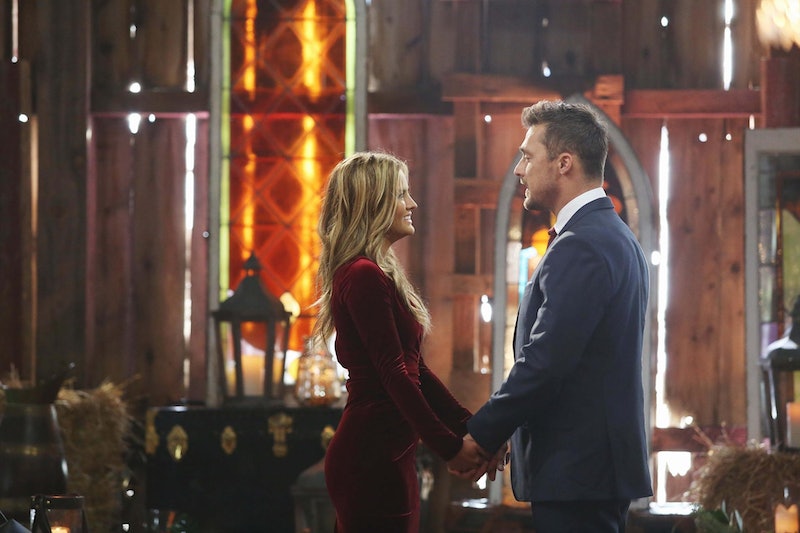 I wish I could say that The Bachelor finale surprised me, but it didn't — mostly because, over the past few weeks, Chris Soules has failed to grow in the way I hoped he would. There are a lot of things I don't like about Chris, but one of the big ones is how self centered he's been about the entire Bachelor process... and how little regard he's held the women's feelings when making decisions. And now that Chris has eliminated Becca in the finale, he proved that he won't be changing his ways anytime soon.

As soon as I realized Becca's limo would be the first one rolling up to the barn, I knew it didn't mean anything good, but I decided to hear Chris out one last time, because this is the finale and everything. Unfortunately, he disappointed me again. He led with this incredible speech about how much Becca means to him and how he can see her as his wife and in his future... and then instantly said that since Becca's not feeling it, this is over. It's unfair to dump someone because she didn't fall in love with you in a matter of weeks in the real world, but this is The Bachelorso I'm willing to suspend reality. But the speech he gave? Totally over the top and unnecessary if he's just going to send the poor girl home.

And even in the process of dumping Becca, Chris still made it about him. Once again, he's telling someone he is hurting how hard this is for him. If Becca hasn't realized that this is a red flag, she will later, and she will realize she dodged a bullet. To her credit, Becca took Chris' rejection like a champ. Not a tear was shed, she didn't get angry, she didn't get upset. She smiled at Chris and said goodbye, and actually handled the whole thing way more maturely than many of her fellow Bach ladies have handled their eliminations.

Someday, Becca's going to find an amazing man who's cool with moving at her speed and doesn't want her to be anything but who she is. By not proposing to her, Chris did one of the few unselfish things he's done all season, and if anything, Becca should feel free.