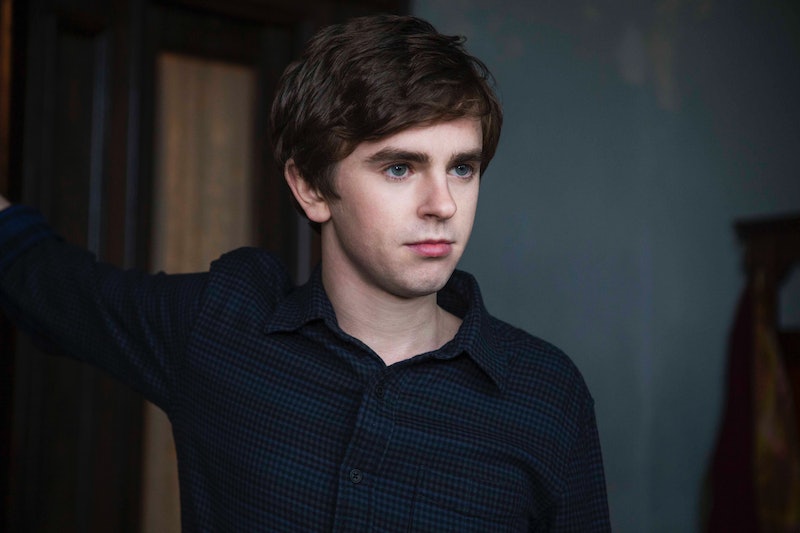 We all knew it was coming, and now the time may have finally come. On the Bates Motel Season 3 premiere "A Death in the Family," Norman may have finally, properly succumbed to his dark Psycho-like tendencies as he may have murdered a customer of his mother's motel. Ever since the series first was announced, viewers knew eventually Norman would become the infamous killer we all know and fear. And with the Season 2 finale, when Norman let his Norma side come out and lie on his polygraph test when asked if he killed Blair, the time for Psycho Norman came even closer. But Season 3's premiere took Norman's violence and psychological problems several steps further as it seems like he may have properly and knowingly murdered a woman, most likely thanks to his dysfunctional and scary sexual issues.

The episode began relatively normally — well normal enough for this series — with Norman waking up beside Norma (nothing sexual... for now... shudder!) and Dylan telling their mother that as an 18-year-old young adult, Norman really shouldn't be sleeping in the same bed as his mother. Norma tried at first to ween her son off of her by forcing him to go to school for his first day of senior year. But when Norman had a crazy scary daydream involving his most recent victim Blair, she changed her mind and promoted Norman to motel manager. She also said he could be home-schooled for the rest of the year.

So much for trying not to have a creepy relationship, huh? Well, while with his mother at the motel, Norman comes across Annika who is renting a room and whose business includes, ahem, pleasure. Ahh let's just come out and say it, she's a prostitute. Obviously Norman is attracted to her and does creepy boy stuff like staring a little too long at her cleavage. But while most women might scoff or get grossed out by the oogling, Annika encourages it and has multiple conversations throughout the episode with Norman about her work.

Norman attempts to continue on with a normal life by asking Emma out (FINALLY!) and trying to be a responsible manager at the motel, but obviously that was never going to last as Norma later catches Norman pulling a major Psycho moment by creepily peeping at Annika as she showers. Later he attempts to tell his mother that it was a one-time thing, it was an accident. But come on, we all knew that wasn't true.

When Annika needs directions to get to a restaurant in town to meet a client, Norman offers to drive with her and show her where it is and then drive back. But in the car, the two start talking about Annika's prostitution and why she chose to go into that life. When Annika began talking about how sex is a natural part of life and that everyone needs it, Norman's dark fantasies began to manifest.

There's no blood, no gore, no body. All we see at the end of the episode is Annika's black car driving back to the Bates Motel parking lot, and Norman stepping out of the driver's seat. But it seems pretty clear what has happened. Now I wonder, will Norman tell Norma what he's done? Will he be able to control his dark urges? Now that he's supposedly going to be dating Emma, I'm genuinely worried for her safety, no matter how much he really does care for her. Damn it Norman! It's just not normal!

More like this
What’s New On Netflix: 'Stranger Things' & 'Mean Girls'
By Arya Roshanian
Don't Expect To See Your Fave Modern Royals Depicted On 'The Crown' Season 6
By Jack Irvin
'Succession' Season 4 Could Be The Show’s Last
By Kadin Burnett and Gabrielle Bondi
Everything To Know About The Bear Season 2
By Brad Witter
Get Even More From Bustle — Sign Up For The Newsletter