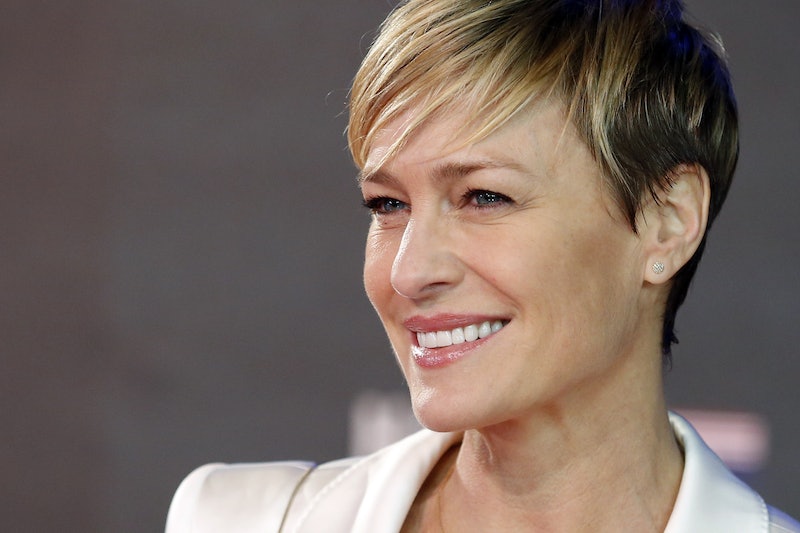 Step aside, Claire Underwood is here and she's speaking about something very important: becoming famous at a later age in life. In an interview with Vanity Fair, Robin Wright talks her age and how stardom didn't come for her until later in life. She recognizes that people are now noticing her and respecting her work more, most likely because of her role in Netflix's House of Cards. Yes, in 1987, Wright first came on the scene for The Princess Bride, but ever since then, she admits she was more focused on her role as a mother and wife to ex-husband Sean Penn. Wright said,

We agreed as parents that we’d not work at the same time, so that one of us was always with the kids. He was making more money than I was at the time, so it was a simple decision: "You go work—I’ll stay with the kids."

Now that their kids are grown up and Wright is older, she feels she is ready to take the world by storm and continue to make a name for herself. She said,

I feel as though I’ve just graduated. I mean, I never went to college. I was pregnant at 23. You hear people say how they have "arrived," but it was just always there, waiting to come out. For me, it just took a long time. I’m 48. I’m finally a person. I think I’m finally ready.

With those few words, Wright is proving that you can peak at any age. Just because you're in your 40s, 50s, or 60s, doesn't mean you're life and career are over. You can be relevant at any age, which is something Hollywood is still, unfortunately, figuring out. Even though she doesn't mention ageism directly, in a way, Wright is defying the stereotype so many struggle with in the entertainment industry.

For example, take Madonna who is fighting ageism to its core. She's is continuously showing how women, especially, can do anything no matter their age. You don't have to be young to be successful. As Madonna said in an interview with Rolling Stone, "So if I have to be the person who opens the door for women to believe and understand and embrace the idea that they can be sexual and look good and be as relevant in their fifties or their sixties or whatever as they were in their twenties, then so be it.

Thankfully, we have women like Wright, Madonna, Meryl Streep, Oprah Winfrey, Viola Davis, and many others to show the world that women are a constant force to be reckoned with.

Wright, you might be peaking at 48, and I wouldn't have it any other way.