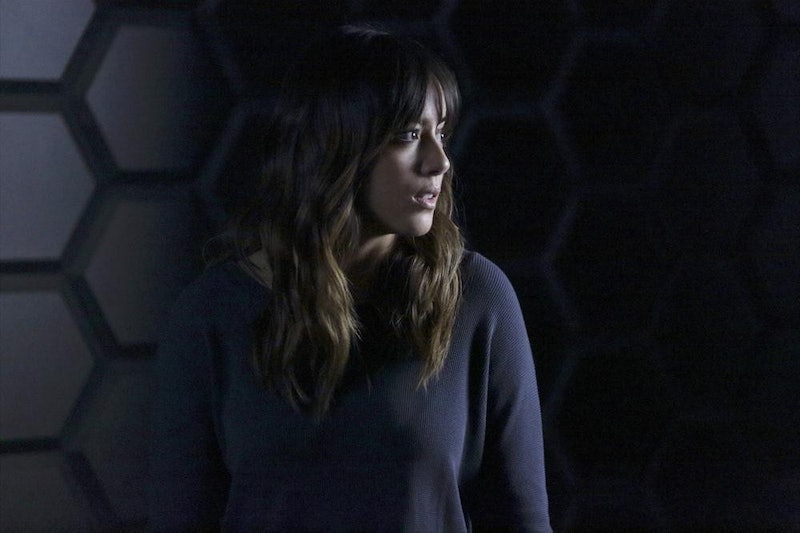 We may have learned that Skye is Daisy Johnson, aka Quake, but her story is far from over. Has Skye been turned into a weapon on Agents of S.H.I.E.L.D.? In Tuesday night's episode, we met Vin-Tak, a little guy that lives a blue world. He was, in fact, a Kree who used nitrogen to change his blue skin color and appear to be a white . The alien, played by Warehouse 13's Eddie McClintock, arrived on Earth to investigate the terregenesis event that caused Skye and Raina's transformation. He claimed that the transformed were created to be weapons and could not be trusted.

Human weapons are not a new concept to fans of the Marvel, or even Whedon universes. River on Firefly was brainwashed until she became a weapon. The dolls on Dollhouse, which S.H.I.E.L.D. showrunners Jed Whedon and Maurissa Tancheroen wrote for, were used for all manner of good and evil. In the Marvel Cinematic Universe, the Black Widow Academy turned girls into weapon-like soldiers. We saw that expanded on Agent Carter.

However, Vin-Tak's story doesn't quite add up. Last week, we saw Skye's mother and Gordon prove that these powers can be controlled and turned into something beautiful. It seems as though the Inhumans have discovered something about themselves that the Kree never did. Vin-Tak repeatedly referred to Inhumans as abominations. Besides being rude, I'm not buying it.

Still, at the end of the episode, Skye packed her bags and stormed all the way out... to a cell on the other side of the plane. It was a bit melodramatic, don't you think? This must be the Order of the Pheonix chapter in Skye's heroine journey. Even the best of us have to angst it out every now and then.