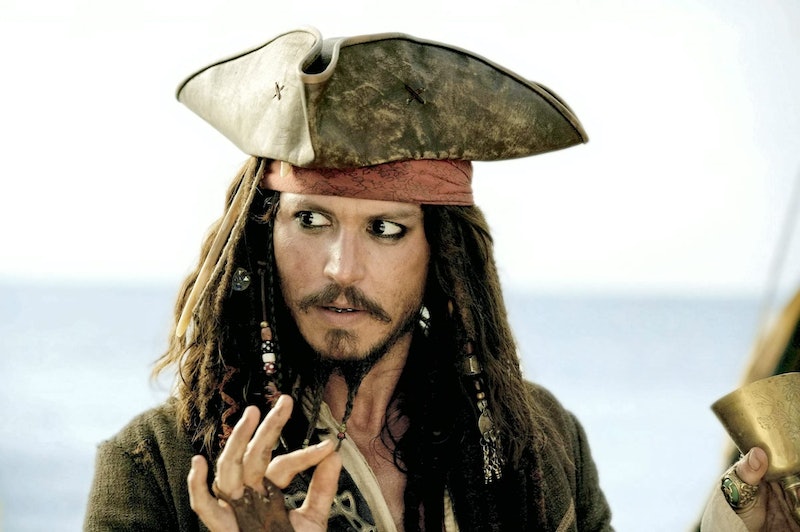 The life of a pirate is a very dangerous one indeed, especially when you are the starring pirate in an incredibly popular franchise about the aforementioned lifestyle. Whether you're excited about it or not, Pirates of the Caribbean 5 has both a title and an official plot summary — and it actually sounds like it's going to be an amazing addition to the franchise despite the lack of Orlando Bloom and Keira Knightley. However, tragedy has struck the set already since Johnny Depp injured his hand during filming and had to fly home in order to get surgery. Yikes.

According to US Weekly, Depp didn't actually receive the injury on the set, thankfully. However, there are no details about exactly how the actor sustained the injury; instead, he was spotted boarding a private jet en route to Los Angeles and will reportedly be out of commission for two weeks. A Disney spokesperson reported that Depp's injury wouldn't delay the film too much — and that the movie would certainly be able to open on schedule — but two weeks still seems like a torturous amount of time to delay filming by.

It's nice of them to give Depp all of the time he needs to recovery but, if they find themselves in a pinch after two weeks have passed and he's still hurting, there are plenty of ways his injury could be woven into the POTC5 plot.

2. Jack Injures His Hand As Well

Much like when Jared Padalecki injured his wrist during Season 2 of Supernatural, Disney could just write Jack having a hand injury into the plot of the film. With all the dangerous stunts he pulls, it's a wonder he hasn't been injured yet. You know. Aside from that time he died.

Pirates of the Caribbean features a lot of magic, so who's to say Jack has to replace one of his hands with a hook? Maybe he gets a magical, possessed hand that they can edit over Depp's injured hand. Hey, that would be great sequel bait!

4. Give Another Character More Screentime

Personally, I think that they should bring Zoe Saldana back. Or Penelope Cruz. Is Penelope Cruz in this movie? Yes? No? Please?

Give Jack an entire bizarre dream sequence full of CGI Johnny Depps — not unlike that whole sequence where he went crazy after dying. In fact, it doesn't even have to be a dream sequence. Jack is always half-drunk on rum, so it's about time he starts hallucinating about himself.

Jack spends most of the movie completely submerged in water. It would be like having women carry large purses or posters or house plants to hide their pregnancies on TV shows, except it would involve a lot more water.

This isn't even an option. Come on. A two week delay might be nothing, but Disney should keep these back up plans on hand (no pun intended) just in case.