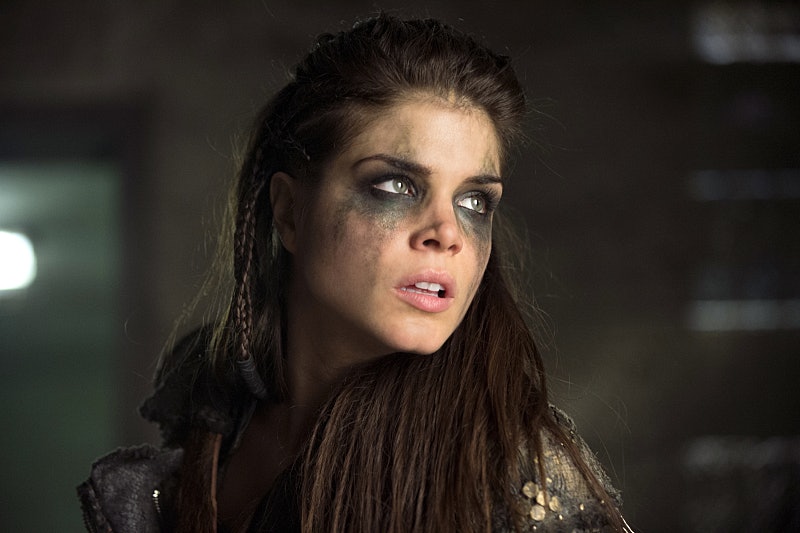 Life on Earth isn't easy, especially after residing in space for almost a century, but the teenage delinquents of The 100 have adapted to their new environment quickly. And even though Clarke was quickly appointed leader of the pack, Octavia has proven to be the true hero of The 100 . I mean, sure, she wasn't my favorite character at first (not even close to it, actually) but life dealt her a bad hand and after almost two decades of hiding in the floor of her family's spacepartment, the girl just wanted to be free.

Octavia's initial naivety and reckless abandon stopped short after meeting the forever sexy Lincoln, and their Grounder-human love developed into a pretty stellar bond of mutual respect, strength, and trust. He showed her the Grounder lifestyle and she made it her own. Now, Octavia is down with the rugged ways of a fighter, and will do whatever it takes to protect her leaders and her people. She has put her own life on the line over and over, in order to keep those she loves safe from harm. Here's why Octavia is the baddest badass on The 100.

1. She Literally Dove Into Uncharted Waters

At the time, it seemed like a bad decision. The kind that made you scream at your TV screen, "Get out of the lake!" But getting to know Octavia over the last two seasons, it's just her style. She dives in first and thinks later, not the other way around.

2. She Totally Owns Her Desires

When Octavia finally got out of her floor cubby, and then her jail cell, she just wanted to party. She hooked up with multiple drop ship passengers after first landing on the ground and didn't apologize for any of it. Why should she? She's young and alive and in a brand new place. Why not have some fun?

3. She Put Herself in Danger To End Lincoln's Torture

Some might call it Stockholm Syndrome, but most can see that what Octavia and Lincoln had from the start was pure and adorable love. While Bellamy and Clarke were torturing him for Grounder intel, Octavia refused to tolerate another moment of it and put her life at risk, knowing Lincoln would crack to save her.

Let's be real, caves have extreme humidity, sharp edges, bats, and some of the craziest insects in existence. Those elements do not usually make for a sexy setting. But when Octavia and Lincoln get together, their chemistry is explosive and not even rabid bats could keep them from gettin' dirty in a cave.

5. She Never Lost Faith In Bellamy Or Lincoln

Bellamy started as a power-hungry jerk and Lincoln had a brief period as a drug addicted, mouth-foaming cannibal. But Bellamy is her brother and Lincoln is her soulmate, so even during their darkest moments, Octavia loved, supported, and guided them back to their best selves.

6. She Has THE BEST Grounder Braids

Katniss Everdeen could stand to take a few braid pointers from Octavia, because seriously, her hair is amazing.

7. She Volunteered To Become A Warrior

Octavia wanted a purpose on Earth, so she decided to become a member of the Grounder army. Her first test: a fight with a scary-looking Grounder dude. And while she certainly didn't win that fight, she also didn't give up. She just kept fighting.

8. She Speaks the Truth, Even When It Hurts

Clarke has made some seriously questionable choices as leader this season, and Octavia isn't afraid to express her frustration. She told Clarke that after they take Mount Weather, she'd be done with him for good. Octavia always tells it like it is, even when it's brutal.

9. She Doesn't Let Fear Get In The Way

Octavia isn't fearless, because fear is a natural human emotion. But she doesn't let fear get in her way either. She heads straight into battle when needed, and even after she's abandoned by her entire army (following Lexa's shocking betrayal last week), she won't give up hope that there's still a battle to be won.