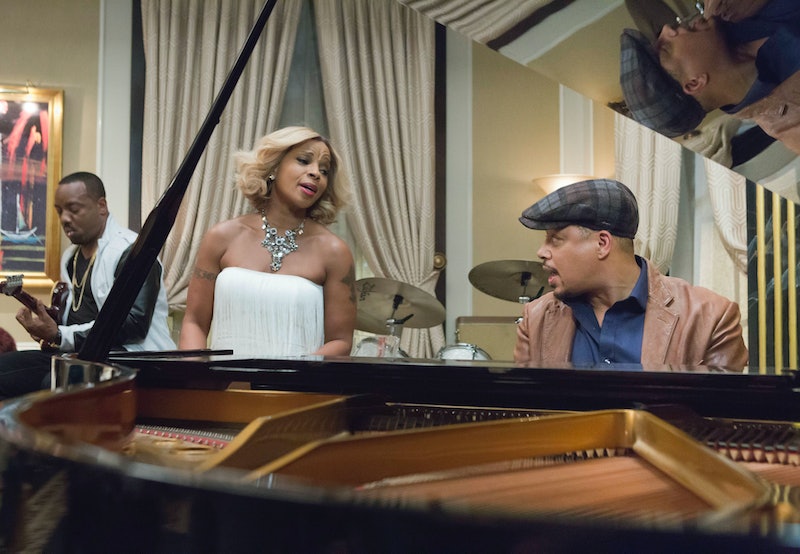 The parade of amazing Empire guest stars rolls on. In "Sins of the Father," which airs on Wednesday, March 11, there will be guest appearances by Jennifer Hudson, Naomi Campbell, and Mary J. Blige. We know Hudson has acted before. (Remember her terrible subplot in the Sex and the City movie? Oh yeah, and that whole Oscar-winning Dreamgirls thing.) But has Empire guest star Mary J. Blige acted before?

I mean, it's not like the role is going to be a huge stretch for Blige. In the show, she plays Angie, someone from Luscious' past. And — surprise, surprise — she's a singer. That totally seems like something Blige could handle even if she doesn't have any real acting experience, right? In any case, no matter what her acting ability is, she's going to get to sing — something we know she can do already. She'll perform a song called "Shake Down," a piano-heavy duet with Terrence Howard. According to Entertainment Tonight online, Angie and Lucious sing it together in a flashback; there's still no word as to what Angie is doing in Lucious's present. Still, if you want a sneak peek at the song, you can listen to it here.

That works for the singing. Now, what about Blige's acting? Good news: There's no need to worry. Blige has indeed acted before. She's been in a bunch of different TV shows and movies, actually. Here, some of her most oustanding credits.

In the film adaptation of the Broadway show, Blige played Justice, the owner of a "gentleman's club." When Vanity Fair asked her about the '80s soundtrack, she said, "We loved Pat Benatar. I was definitely a full hard-core, hip-hop head, but the beauty about [my life] is that when I was a little, little girl, my dad and my mom played so many different things, including so much soul music, in the house."

OK, her role here isn't as meaty as her role in Rock of Ages, but there's a definite rock-theme going to her career. In one episode, she plays a singer (duh) recording a benefit song about a kidney. She's in good company: Elvis Costello, Norah Jones, Talib Kweli, and Cyndi Lauper are all there, too.

Who'd she play on Entourage? The role everyone plays when they go on Entourage — herself. We can only wait and see see how the TV version of Mary J. Blige, a diva client of Ari Gold, differs from Empire's Angie.