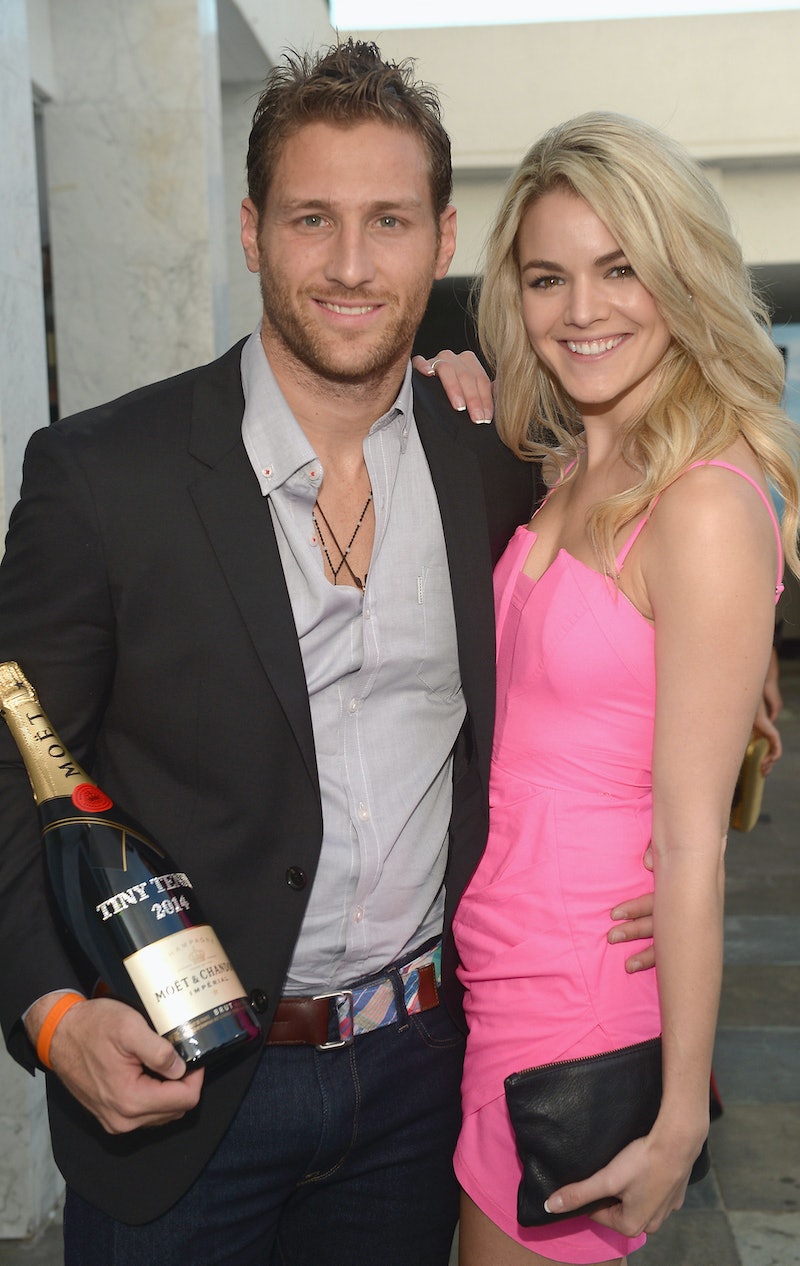 The Bachelor has been on for 19 seasons, but, sadly, not every relationship formed by the finale of the show tends to last for long after the cameras stop rolling. Although 11 of the men have proposed to women during their dramatic finales, only one of them has ever actually walked down the aisle. (Jason Mesnick doesn't count, since he broke up with the woman he originally proposed to.) On average, most Bachelor couples break up shortly after their season finishes airing — if they can even make it that long. This same principal doesn't hold true for The Bachelorette, however. The Bachelor's sister show has produced three weddings in just 10 seasons.

Everyone but Brad Womack has walked home with one of the women, but that doesn't always mean they could stick it out. That just makes it all the more special and inspiring when a couple truly does go the distance and make us all believe in love again, thanks to the reality TV show. But, realistically speaking, what does Happily Ever After on The Bachelor look like? On average, couples can make it a few months before calling it quits — which is true to life, and makes the show even more relatable.

The important thing is that, just because a couple doesn't make it past the finale doesn't mean their relationship was a failure. The Bachelors have come to find love, but some of them find lasting friendships instead. Even when things don't end amicably, they found a connection they never would have achieved without their time on the show. And that's the real charm and magic of The Bachelor.

The first Bachelor couple only made it a few months. Marsh eventually dumped Michel when she found out he was still talking to runner-up Trista Rehn in May.

Firestone and Schefft announced their split in a television exclusive in December 2003. "This is a decision we made together through long and thoughtful discussion," the pair's statement said. "It is totally amicable and, though we care for each other deeply, we have come to realize that our future goals are different."

Palmer never proposed to Bowlin, which was for the best since they only made it a few weeks after their finale aired.

In one of the longest-lasting relationships to come off the show, Velvick and Delgado were engaged for five whole years before things ended.

Despite not proposing to Brice during the finale, the couple made it a long time before breaking up for good. They dated for about four of those five years, taking a break from 2007-2008 before ending things for good in 2010 with an amicable separation. "I think it was a mutual break-up. The thing is that we dated for five years... and were just arguing over the same things and stuff like that," O'Connell said of the split. "Eventually you've got to go your separate ways."

Stork and Stone lived in the same town, but, during the time the show aired, were unable to see each other. It caused a rift in their relationship, and, a week after the finale, they confirmed that they'd broken up.

The pair split after reports that Borghese was still seeing the runner-up Sadie Murray.

Baldwin and Horst called off their engagement in August 2007, but kept dating each other for another month before calling it quits for good.

Brad Womack dumped both women at his finale, and he walked home alone.

After just a couple of months, the pair issued a joint statement signaling their break-up. "We tried hard to make it work but we realized that we were both heading in different directions. We truly care about each other and will remain close friends," the statement read.

Although Mesnick picked Melissa Rycroft in the finale, during the After the Final Rose special that aired right after, he changed his mind and announced his love for Molly Malaney instead. Malaney and Mesnick got engaged in October 2009, and are still happily married today.

The couple lasted just a few months before splitting and embarking on a crusade to defame one another to the press.

Technically Maynard and Womack broke up before the finale even aired, but they got back together to try to make things work. They lasted three whole months after the finale before deciding to call it quits.

Robertson later wrote in her tell-all book that she and Flajnik broke up in February prior to the taping of the Women Tell All, but patched things up just in time for the finale. They lasted another few months before ending things for good in October 2012.

Sean Lowe became the only Bachelor to wed his finale pick when he and Giudici married on January 26, 2014. Today, the couple is still happy as ever. Awwww.

Juan Pablo and Nikki Ferrell actually made things last a lot longer than most people predicted before officially ending things in October 2014. Although Ferrell says that Juan Pablo eventually told her he loved her, in the end, it was too little too late.

The most recent Bachelor seems to be doing very well with his fiancee, and there's even talk of them two of them moving in together. Only time will tell if they can stick together romantically, but things are looking good so far!