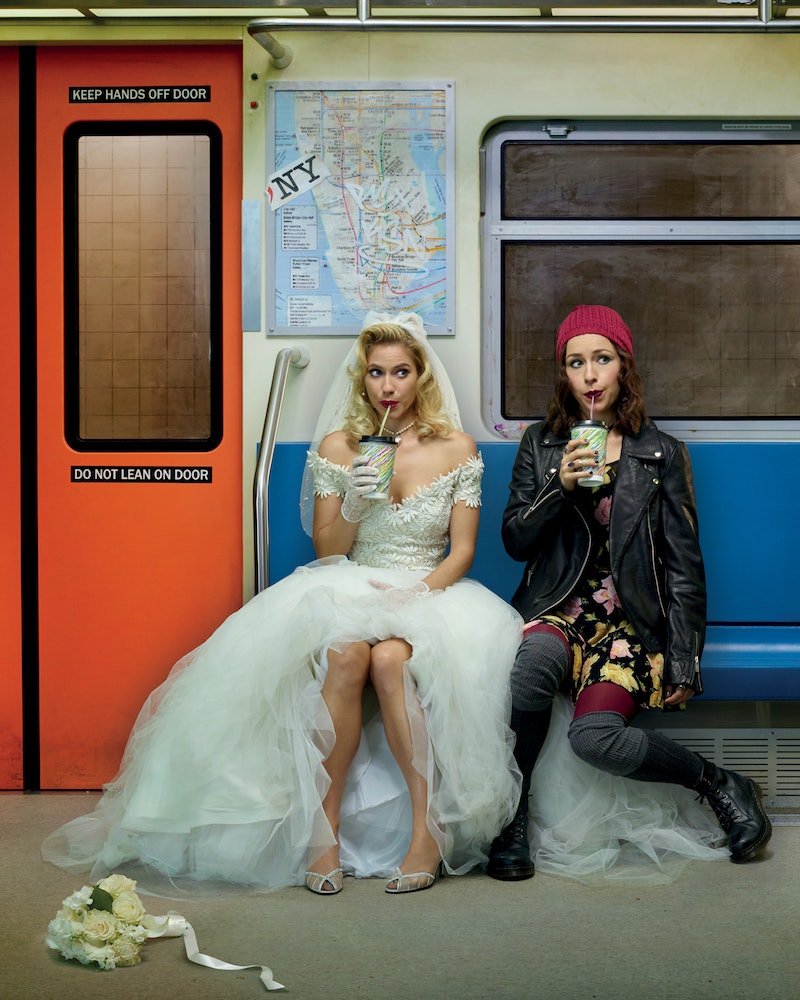 Hindsight is all about second chances. The show starts with Becca (Laura Ramsey) about to enter into her second marriage. Then suddenly, she jumps back in time to 1995, giving her the chance to correct the mistakes she made in the late-'90s/early-'00s. But the big question remains: Will the show itself get a second chance? Is there a second season of Hindsight in the works?

VH1 has yet to make an official announcement about whether or not Hindsight is coming back for a second season; and there isn't anything currently in production, so there's no telling when a second season would start. The best we can do is use our own time-travel plot contrivance and head into the future, where we can make our best guess about the show.

Sadly, the most important numbers — the ratings — look grim. "[The show] drew a mere 367,000 viewers in its opening round, dropped to 226,000 week two, then rebounded to 298,000 last week," the Atlanta Journal Constitution reported (since the show is shot in Atlanta). "Even then, those alarmingly low numbers make chances of a renewal very slight indeed. In comparison, Single Ladies, an Atlanta-based soap VH1 inexplicably cancelled last year (and was picked up by Centric), regularly drew 1.6 to 1.8 million overnight viewers."

And it's not like the numbers have improved since those first two episodes. TV Series Finale reports that the number of viewers has stayed in the 175,000 to 367,000 range, never cracking a million. In short, Hindsight is about as popular as Collective Soul is now.

There's also the rub that period shows are always more expensive to produce than contemporary ones. I know that '90s seems so recent to be considered "period" (at least to some of us), but it is. Just think about the clothes, for instance. “You can get ’90s-type dresses, but they’re not actually ’90s," creator and executive producer Emily Fox told Entertainment Weekly. "Now everything is super body-hugging and flattering. In the ’90s everything looked like pajamas. When we first started out on the pilot, we sat in a hotel room in Universal City for 48 hours and went through racks and racks and racks of things [wardrobe] found in a warehouse.” That takes up time, which costs money.

The show's one saving grace is that critics seem to like it. Sometimes that can help — some networks keep a show around for the prestige of praise that comes with it, even if the ratings haven't caught up yet. I agree with the assessment of the show from Margaret Lyons over at Vulture: "I like Hindsight's ambivalence about adulthood and its enthusiastic sense of humor, but on a basic cellular level, the show is fun. It's a refreshingly un-miserable show, and while it covers a range of human emotions and identities, none are 'murderer' or 'super murderer.'" Sometimes it's good to have a show, like Parks and Recreation before that ended (tear), that doesn't totally bum you out when it's over.

Still, waiting for a second season of Hindsight might be like waiting around for Rivers Cuomo-style bowl cuts to return. Some things from the '90s just aren't coming back.