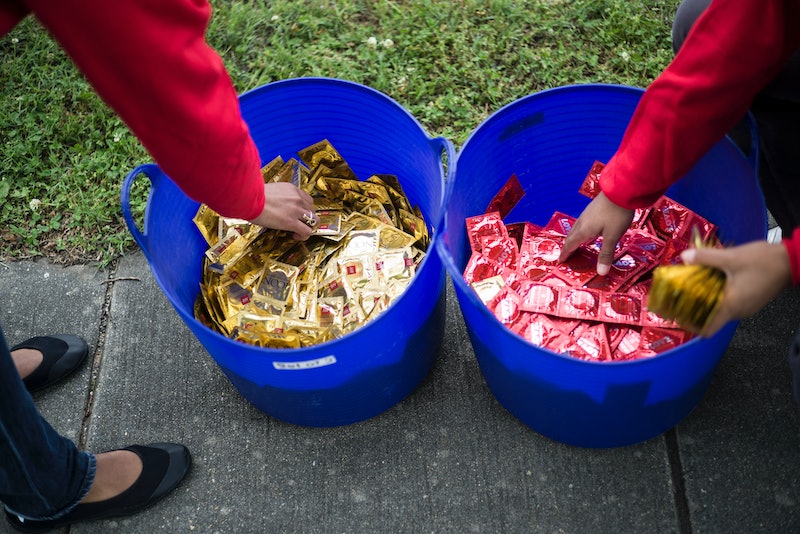 After being inundated with emails hyping the total awesomeness of Twitter’s adverting program, condom company Lucky Bloke decided to give it a whirl. They choose the following seemingly innocent tweet. Unfortunately Twitter’s powers-that-be thought it was a little too racy and put the kibosh on Lucky Bloke conducting any sort of advertising whatsoever.

But Lucky Bloke isn’t the only one. Several condom companies and organizations promoting sexual health have been banned from Twitter as well for their sexual content. Heck, even I’ve been banned and I’m just a writer.

Considering (as we all know) that advertising is generally tailored to a user’s interests and actions online, it seems to be a rather anachronistic and Puritanical policy. After all is Grandma really going to be targeted for sex toys and condoms? Is she even on Twitter? Unless your grandma is Dr. Ruth, my guess is no. In fact, LuckyBloke CEO points out that she did specifically target adults over 18 who follow sex and relationship Tweeters like Dan Savage and Emily Morse.

However Twitter has finally lifted the ban, allowing non-prescription contraception like condoms and spermicides as well as lube to fall under “health and pharmaceutical products” rather than an adult or sexual product or service. Nonetheless, it’s not a total victory. Advertisers still cannot actually mention any sort of sexual content in their ads. In other words, you can’t mention “sex” even if you are trying to promote safe sex. It’s like playing a game of Taboo. Literally and figuratively.

While Kim Kardashian’s bare butt is seen all over the internet (including Twitter), sexual health organizations have to fight just to get the message out. Even Playboy has been allowed to advertise on Twitter, though it often features (duh) nudity.

Not wanting to feature advertisers that promote blatant pornography is understandable. But conflating sexual health with adult or pornographic content is dangerous and antiquated. 97% of people will have sex before marriage. Sex and nudity is everywhere and readily available. And while sex may exciting, sexual health is often not. Safe sex is a message that needs to be heard. At least if you don’t want chlamydia.