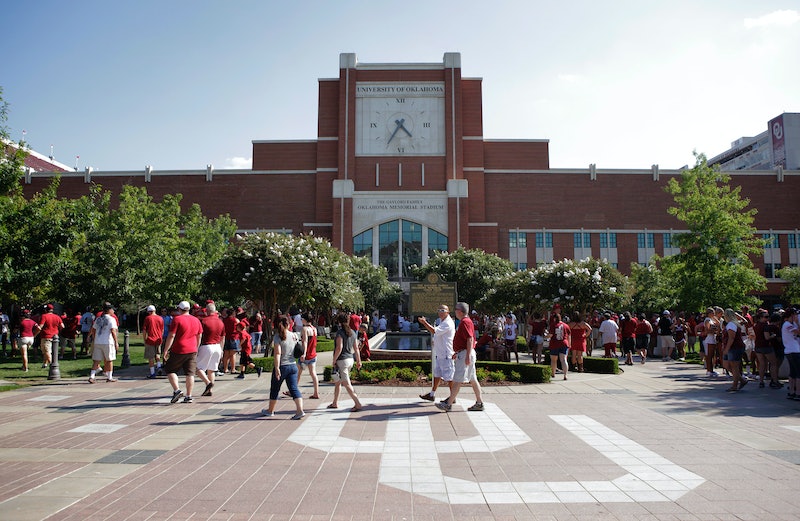 The University of Oklahoma fraternity incident should be from a distant bygone era, not 2015. Over the weekend, an anonymous person sent the school's The Oklahoma Daily newspaper a nine-second video of a group of OU Sigma Alpha Epsilon members singing a racist chant as enthusiastically as if it were a pep rally song. In response to the video, the school has permanently shut down the fraternity and two of the students involved have been expelled.

Regardless, this kind of seemingly nonchalant incident raises the very serious question: How often does this happen? What's even more disturbing than the Oklahoma episode is that there have been many more like it, proving that racism is still very much prevalent in this country. And yes, we are in the 21st century.

The video reportedly shows members of the SAE fraternity, which had just celebrated its Founder's Day, traveling by bus to a formal event on Saturday evening. On the bus ride, the members are shown singing blatantly racist lyrics in a celebratory manner. When the video came to light, university President David Boren immediately shuttered the fraternity and SAE's national organization also severed ties from the OU chapter.

It was unbelievable that this could have possibly occurred with UO students. Sooners [the nickname given to the university's students] are not racists. They're not bigots. They are people who respect each other and care about each other.

In light of the video, however, Boren's assessment might be wishful thinking. Chelsea Davis, president of Unheard, a campus organization promoting diversity awareness, believes that this type of racist behavior happens all the time, not only in this fraternity and school but on campuses across America. She told CNN:

Her words reflect a much more accurate picture of college campuses in the country. In the 21st century alone, there have been numerous incidents involving students engaged in racially offensive behavior, and these were just the reported cases.

More like this
How The City Healed Five Years On From The Manchester Arena Attack
By Ella Glover
How To Fight For Reproductive Rights, Based On How Much Time You Have
By Courtney Young
Michigan’s Governor Is “Going To Fight Like Hell” To Protect Abortion Access
By Andrea Zelinski
Yomi Adegoke On The Offline Diaries & The Power Of Representation
By Jessica Morgan
Get Even More From Bustle — Sign Up For The Newsletter