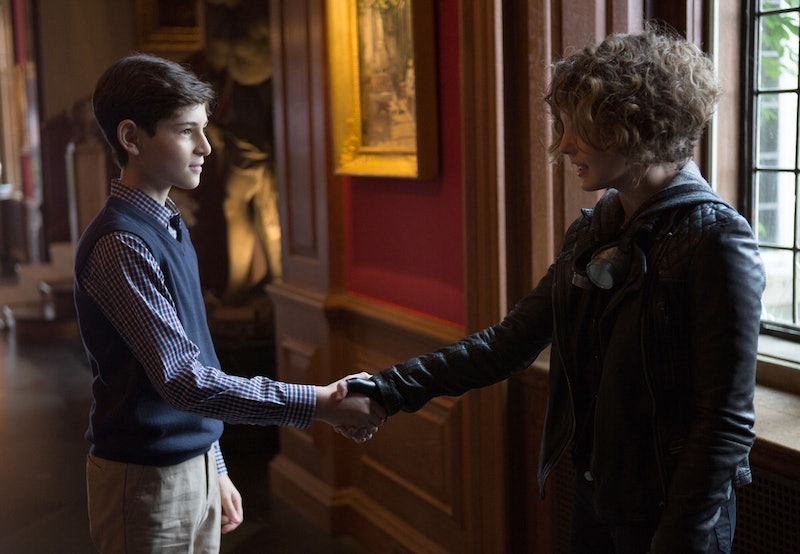 This will come as no surprise to anyone with even the vaguest knowledge about the Batman mythos, but tuning in to Gotham every week is even more enjoyable when Bruce Wayne and Selina Kyle interact. Although the two are still young, we all know that they will one day grow up to be Batman and Catwoman respectively (though Selina is closer to her future than Bruce currently is) — and watching them interact with each other as children is adorable. Sure, Jim Gordon and Barbara Kean may have started out as the main couple of the show — and, sure, Selina and Bruce aren't an actual couple yet — but the future Batman and Catwoman are literally the cutest Gotham 'ship, and no one can tell me differently.

Despite their young age, Selina and Bruce have already shared a kiss, and they've already come to trust and rely on each other. (Well, Bruce relies on her more than she relies on him, but, hey, all the women who independent, throw your hands up at me.) Over the course of the first season of Gotham, the two had so many heartwarming moments with each other that fans can reflect on. If this is how cute Selina and Bruce can be before they ever don their iconic costumes, I can't even imagine how much cuter they'll get as they travel along their journey to their comic book personas.

Let's take a look back at some of their best and most 'shippable moments.

1. When She Witnessed His Origin Story

In the Gotham universe, Selina is the sole witness aside from Bruce to the Wayne murders. How much she actually saw is suspect, but it does give her and Bruce a poignant connection he doesn't share with anyone else.

2. When He Had A Big, Obvious Crush On Her

Seriously, Bruce full-on lights up whenever Selina walks into a room now. You can literally see him awkwardly fumbling and practically flailing in his effort to get her to think he's cool. But he's not cool. Batman is cool; Bruce is adorkable.

3. When He Chased Her Across The Rooftops

Selina tried to get away from him by leaping across the Gotham City rooftops like the parkour angel she is. Not only did Bruce chase after her... he politely asked her to stop running because he was getting tired.

4. When They Kissed For The First Time

On one notable occasion, Bruce turned down Selina's offer to kiss him because he was afraid she had ulterior motives beyond just wanting to kiss him. When they finally did lock lips, it was awkward... and sweet and cute and everything you'd want your first kiss to be.

5. When She Dumped Him To Keep Him Safe

After spending an entire episode on the run from assassins — assassins that nearly killed Bruce — the next time she was summoned to Wayne Manor, Selina broke up with him. Not that they were dating. But she denied having seen anything the night of the murders, and she insisted that they had no more reason to associate with one another. My theory is that she was trying to keep Bruce safe. After all, those assassins were after her.

Bruce camped out by Alfred's hospital bed after he was stabbed by an old war buddy, and then Selina showed up unexpectedly to give him this really sweet hug. Seriously, it was the sweetest. Remember when you wanted nothing more to do with him, Selina? Because I don't.

7. When She Introduced Him To Her World

Bruce might have been raised in luxury, but the streets are Selina's kingdom. The entire episode she devoted to trying to teach him how to be a little less polite and a little more of a survivalist gave me so many Bruce and Selina feels that I needed a week to recover.

8. When He Offered Her A Place To Stay

Sure, she turned him down, but, hey. The offer was there. And, considering Bruce hasn't lived with anyone but Alfred since his parents were killed, it was an offer that showed a lot of trust and affection on his part.

9. When She Full On Edward Cullen'd Him

From the pilot to the present, Selina spends far too much of her time stalking Bruce, breaking into his house, or finding him wherever he is in the city. Considering he grows up to be Batman, I'm pretty sure he finds it charming.

10. When He Left Her A Message

Who would drive into the filthy streets of Gotham just to get a message to Selina Kyle? Bruce, that's who. And what was the message? He got her a present. Too cute. TOO CUTE.

They're Batman and Catwoman, you guys. Admit that you were 'shipping it long before they ever even spoke.