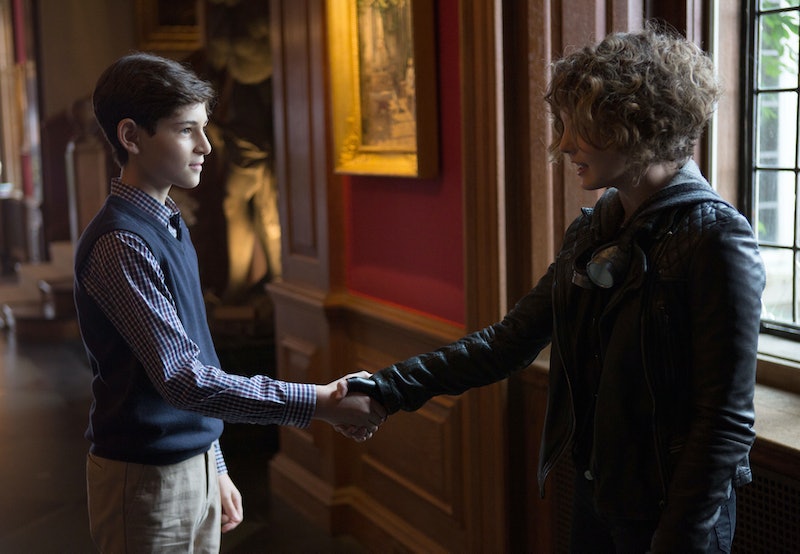 The moment we've all been waiting for finally happened on Gotham. Well, okay, the moment we've all been waiting for after Barbara Kean and Renee Montoya finally getting back together — which also, incidentally, happened in Monday's episode of Gotham . The other thing that Gotham fans have been looking forward to in Season 1 the moment that Bruce Wayne and Selina Kyle, a.k.a. the future Batman and Catwoman, finally meet face to face. Selina has seen Bruce before, having been there the night his parents were killed, watched him from afar, and broken into his house, but this time she was actually an invited guest in Wayne Manor and got to speak to the future superhero. In fact, Selina started training Bruce in the fine art of surviving in Gotham — sort of. The real question is how far this training will go.

When she saw Bruce training to fight with Alfred, Selina pointed out that people on the streets don't fight with gloves on. When she saw Bruce seeing how long he could hold his breath in the pool, Selina pointed out that no one was going to rob him with a diving board. What Bruce needs to survive on the streets of Gotham, according to Selina, is a ruthlessness that he completely lacks at this point. She was able to throw things at Batman while dodging everything he thew back! Future Batman must be ashamed of himself right now. However, according to the promo for next Monday's episode, "Lovecraft," there's going to be an early practical exam for the tips Selina has imparted.

The midseason finale will see Selina and Bruce on the run from professional assassins, navigating the streets together and deepening their bond of friendship and budding attraction. Batman/Catwoman 'shipping aside, it's exactly what Bruce needs right now to open his eyes on exactly how far he still has yet to go on his journey to don the cowl. He can stand on the edge of rooftops and burn himself and hold his breath and research all he wants, but he is currently, at his core, a very nice, very polite, very soft-spoken young man with a huge crush on the first girl to make him laugh and act his age for five seconds since his mother died. Even Alfred has warmed up to Selina from that fact alone, which will make that future wedding a lot easier.

However, it's clear that Gotham is finally starting to build its own myth arc and, in addition to the original villains that weren't pulled from the pages of the comics, it's also clear now that Selina is going to be instrumental in Bruce's eventual rise to the title of Batman. She is going to teach him to access that ruthlessness that he'll need — or at least how to observe the inner workings of Gotham that he doesn't really get to see in his gilded house with his watchful butler Alfred keeping him safe. And, as much as I love seeing Selina and Bruce take the earliest of steps toward a fantastic comic book relationship, it's even more important to me to see Bruce making some progress in becoming Batman. I mean, I know Gotham is all about what went on in the city to make a hero like Batman a necessity, but it's a Batman show without Batman on it. Let's start fixing that.