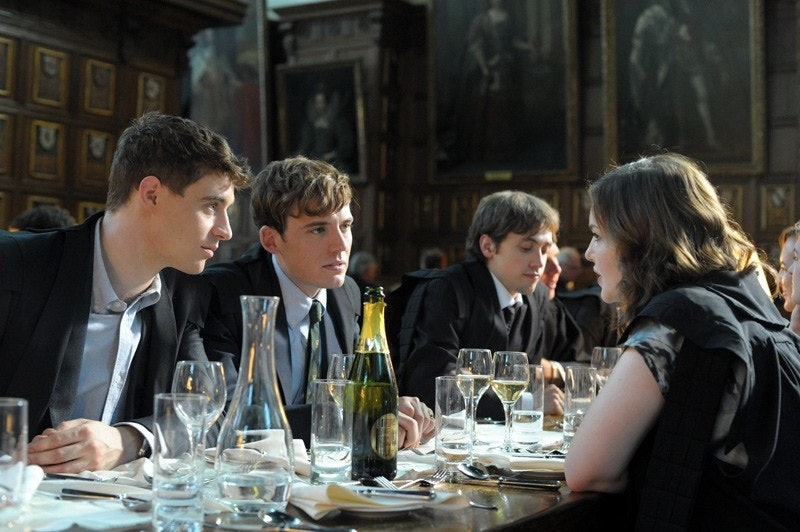 Audiences are often drawn to excess. Whether we want to indulge in bad behavior ourselves, or simply enjoy watching others pleasure-seek, it's fun to watch the spoils of those of a different station than our own unfold on screen. "There are 20,000 people at Oxford University, and there's no more than 10 in the Riot Club," boasts the trailer for the film The Riot Club, based on Laura Wade's successful play Posh. The narrative details 10 Oxford students who pledge their loyalty to a club full of debauchery and Latin drinking games. Wade adapted her story for the big screen, with A-listers like Hunger Games Sam Claflin, Max Irons, and Game of Thrones star Natalie Dormer taking on the juicy roles. And while the story sounds fantastical, at the time of the play's release, parallels were drawn to Oxford's real life Bullingdon Club, though Wade assured her story was purely fictional.

So is The Riot Club based on true events? According to Max Irons, it might just be. In preparation for his role as one of the privileged boys, he spoke to real life members of the Bullingdon Club, who told him the events depicted in the film aren't "actually far from the truth." And Sam Claflin told the BBC of reading the script: "It's so detached from my upbringing. I found it absolutely hilarious. I couldn't believe it was based on a real thing."

One member of the Bullingdon Club wrote a piece for The Daily Mail about the differences and similarities between the film and his time at the club. He said, "I feel somewhat ashamed of having joined the club when I was at Oxford in the early Nineties — and I can fully understand why people find the institution so ludicrous. The Bullingdon is ripe for satirical attack."

He reviews much of what happens in the film, determining it wasn't an accurate depiction. Yet the author of the piece does say, "Bullingdon members would never have battered a pub landlord unconscious — the central incident in the film.The club dinner at which this happens is clearly based on a Bullingdon evening in 2005. In a spine-shudderingly embarrassing evening, Bullingdon members got into a mass brawl and damaged a 15th-century pub in rural Oxfordshire. Horrifying, yes — but the point was that they were beating each other up, not the landlord. In fact, he said they kept on breaking off from the fight to apologize to him." Well, yikes.

The trailer for The Riot Club depicts two first-year Oxford students as they are ushered into the infamous club. With a membership comes a bevy of special treatment, but as they quickly discover, comes at a high — even life-threatening — price. We may never know if the film was crafted with a purely fictitious lense or not, but take a look at the trailer below. What do you think, overly sensational, or totally plausible?