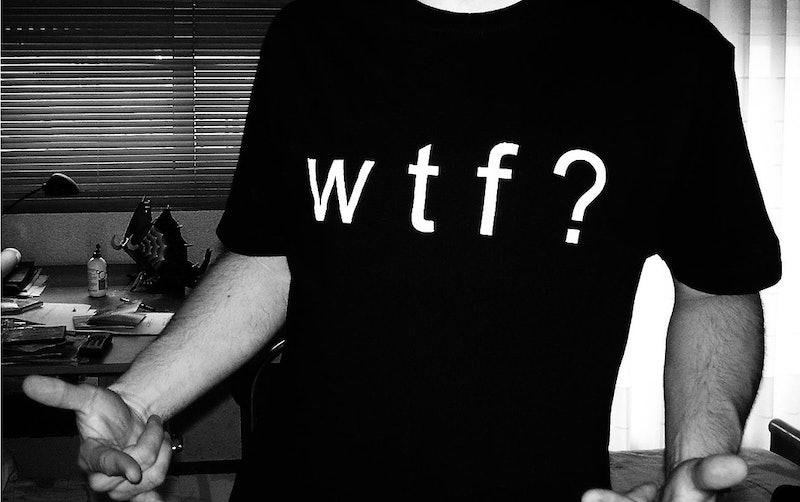 In today's WTF News, we'll start you off with this: Live Action founder Lila Rose, who set up the pro-life organization best known for their hidden-camera sting ops on Planned Parenthood clinics in attempts to end abortion rights, thinks she's just like Malala Yousafzai. Yup, Yousafzai, who campaigns tirelessly for women's rights and access to education for girls, and wasn't discouraged when she was shot by the Taliban for doing so. Small details.

But, Rose adds, her organization isn't conducting their guerrilla sting ops, which have been slammed for editing complex conversations into misleading sound bites, just for Malala's sake. Nope: It's for "Obama's daughters," for his "grandchildren," for "Nancy Pelosi's grandchildren and great-grandchildren," and for convicted murderer "Kermit Gosnell" to boot. The speech was held at the Values Voter Summit, which also saw conservative activist Star Parker denounce June's striking down of DOMA as having "weakened women, [and] opened a door to this new culture of meaningless homosexuality now dividing us and bringing hostility into the public square." She continued: "All sexual behavior is adult behavior, in my opinion, so keep it private."

In other WTF news, the government shutdown has claimed a new victim: Michelle Obama's beloved Victory Garden, which has languished, unloved and unkempt, for two weeks now. Although the few non-furloughed gardeners around are allowed to water the plants, they're restricted from harvesting the crops. Here's a before and after:

Meanwhile, over at Twitter, the all-male, all-white board of directors are facing a barrage of criticism from critics who claim that the company embodies the "Silicon Valley" engineer stereotype. Though Twitter chiefs deny it, this advertisement for work happy hour, posted in the women's bathroom at Twitter HQ, kind of suggests otherwise:

Though a new education report indicates that the U.S. sits firmly in the middle of all developed nations for literacy skills, and flails near the bottom for math and technology prowess, there is a light at the end of the tunnel: the Taylor Swift Education Center, unveiled Monday.

The newly-renovated Taylor Swift sector of the Country Music Hall of Fame and Museum in Nashville, Tenn., made possible by a $4 million donation by the singer, will see presentations from songwriters, free instruments to play with, an exhibition center, and family spaces. Yup, Taylor Swift-funded music education is taking off as the rest of our nation's students struggle to learn long-division. WTF.

A fire-stricken Wendy's in Rib Mountain, Wisc., saw no injuries, but the fast-food joint pretty much burned to the ground. "No injuries" doesn't begin to give credence to the pain of those who loved Wendy's in the town, as Gawker points out:

Customers say they're sad to see the devastation. Jim and Mary Waelchli were planning on Wendy's for lunch.

"Right now it makes me just want to cry because I can smell it, I see it, it's really sad," said Mary Waelchli. "We love Wendy's, we love coming here, it's just hard to believe that something like that happened."

Oh, and if the United States does default on its payments in two days' time, then we'll be the first country to do since Nazi Germany, as Bloomberg pointed out:

Reneging on its debt obligations would make the U.S. the first major Western government to default since Nazi Germany 80 years ago.

Germany unilaterally ceased payments on long-term borrowings on May 6, 1933, three months after Adolf Hitler was installed as Chancellor. The default helped cement Hitler’s power base following years of political instability as the Weimar Republic struggled with its crushing debts.

More like this
Michigan’s Governor Is “Going To Fight Like Hell” To Protect Abortion Access
By Andrea Zelinski
How To Fight For Reproductive Rights, Based On How Much Time You Have
By Courtney Young
Halsey Calls Out Body-Shaming Comments On TikTok Amid Health Issues
By Jake Viswanath
I'm A Fashion Editor & I Get Tons Of Compliments On These Cheap Things From Amazon
By Scarlett James and Nicole Zane
Get Even More From Bustle — Sign Up For The Newsletter