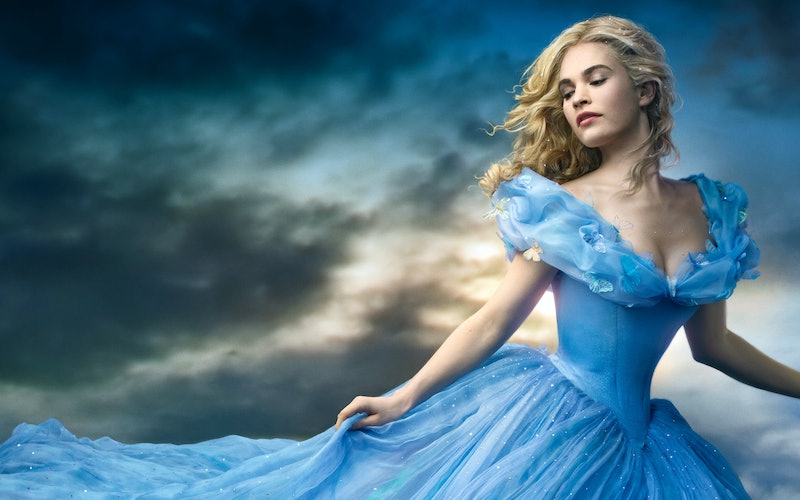 At one point in Kenneth Branagh’s new, live-action Cinderella starring Lily James, Cinderella alters an old dress of her mother’s, hoping that the upgrade from her usual rags will inspire her stepfamily to let her accompany them to the ball. Instead, however, her stepmother insults it — calling it old-fashioned, and sneering that Cinderella’s mother had questionable taste — before ripping it to shreds. The fairy tale itself often gets the same reaction.

The story of Cinderella gets a bad rap among contemporary critics — at best, it’s old-fashioned and perhaps not in the best taste; at worst, it’s ripped apart as a lesson to girls that beauty and passivity will be rewarded with the ultimate goal of marrying rich. But feminism and fairy tales don’t have to be mutually exclusive, and in a moment where all eyes are on his film to see whether it plays into antifeminist criticisms of the world’s most beloved fairy tale, Branagh walks the fine line between traditional romance and modern empowerment with surprising grace.

Maybe every generation gets the Cinderella it deserves. Disney’s 1950 animated incarnation of the tale is about a good little homemaker who is rewarded (with a prince!) for her commendable domesticity. Andy Tennant’s 1998 adaptation, Ever After, features a true heroine of the 90s, a democratic idealist and a leader among the servants in her cruel stepmother’s household. Now Branagh’s take, starring Downton Abbey’s Lily James in the title role and Cate Blanchett as her wicked stepmother, is here to tell us who the Cinderella of the 2010s is. But do the 2010s even want one?

The film begins with a prologue in which young Cinderella’s mother dies, leaving her daughter with one piece of advice: “Have courage and be kind.” This mantra is repeated throughout the movie (sometimes more awkwardly than others), but Cinderella’s commitment to her mother’s last bit of wisdom gives her a strength that counteracts her passive legacy and gets to the truer meaning of the story.

Fairy tales are not meant to be taken literally, but are a distillation of the human experience. Nobody watches Cinderella and learns that their favorite shoes will never fit another human being; nor should anyone take away from it that oppressed, lonely girls who do as they’re told will eventually get rescued by a handsome prince. Less specific but more to the point, the story teaches that having the courage to be kind and remain hopeful in an utterly hopeless situation can save you in a way that you might never expect — and that is a positive lesson for anyone.

Branagh’s Cinderella doesn’t deviate far from tradition, and it comes off like a stubbornly old-school reaction to the recent revisionist fairy tale trend as well as the story’s critics. Not that the film is antifeminist — it just refuses to make its heroine outspoken, tomboyish, or at all badass in a forced effort to appease modern audiences. It does allow for some updates; Cinderella and the prince first meet before the ball, for example, so we know that he admires her for her character and doesn’t engage in that horror of all horrors, love at first sight (a plot device Disney has been trying desperately to eradicate, with such anti-romantic fairy stories as Frozen and Maleficent). You might say Branagh and screenwriter Chris Weitz were quite courageous to be so kind to the Cinderella story, in making such a sincerely romantic film for an increasingly cynical cinematic landscape, where irony reigns supreme.

Hollywood seems to believe it’s outsmarted the traditional fairy tale. In the past few years, the industry has churned out a stream of increasingly dark takes on beloved bedtime stories. December’s Into the Woods, Rob Marshall’s adaptation of Stephen Sondheim’s fairy tale mash-up musical, is the apparent culmination of this trend. The film first sees its various narrative threads to their storybook conclusions, and then lets happily ever after unravel as Cinderella’s prince cheats on her and about half the characters die. The general conceit of Into the Woods is the introduction of human complexity into classic fairy tales, which are not complex — they are deeply sophisticated, but not narratively complex.

Fairy tales are pure plot — skeletons of stories. It is that skeleton that speaks to us, but the way we flesh it out that reveals us. This is where Cinderella has failed us so many times; the story is such that it can easily be draped in very old-fashioned fabric, but it doesn’t have to be. There’s nothing inherently antifeminist in most classic fairy tales, only in our past retellings of them (e.g., “Someday My Prince Will Come”). The fact that Cinderella ends in marriage doesn’t teach little girls that a wedding is the only thing to aspire to; marriage is simply a signifier of maturation and independence as those things would appear in a faraway kingdom.

Into the Woods treats Cinderella as an absolute, and then stomps its shimmering footwear through the tale’s plot holes. But Marshall (via Sondheim) punctured those holes himself, making his heroine an indecisive dreamer and his hero a “charming, not sincere” womanizer. The film aims to subvert the fairy-tale ending, suggesting there is no such thing; “happily ever after,” however, is a powerful device — it only means that the heroine, having overcome her story’s obstacles, is now grown up and equipped to handle whatever challenges life gives her. Where Branagh’s film wears its heart on its glittering sleeve, Into the Woods does a disservice to Cinderella by willfully taking it literally and then exposing its fabricated fraudulence.

When Branagh’s Cinderella asks her fairy godmother to mend her ripped-up, old-fashioned dress, the godmother shakes her head: “I’ll just make you something new!” No, Cinderella insists, this was my mother’s; please just mend it. They reach a compromise: the fairy godmother will keep the same dress, but update it a little (beyond recognition, but still).

Don’t let the movie’s shiny surface fool you; this is still your mother’s Cinderella. But that’s not necessarily a bad thing.