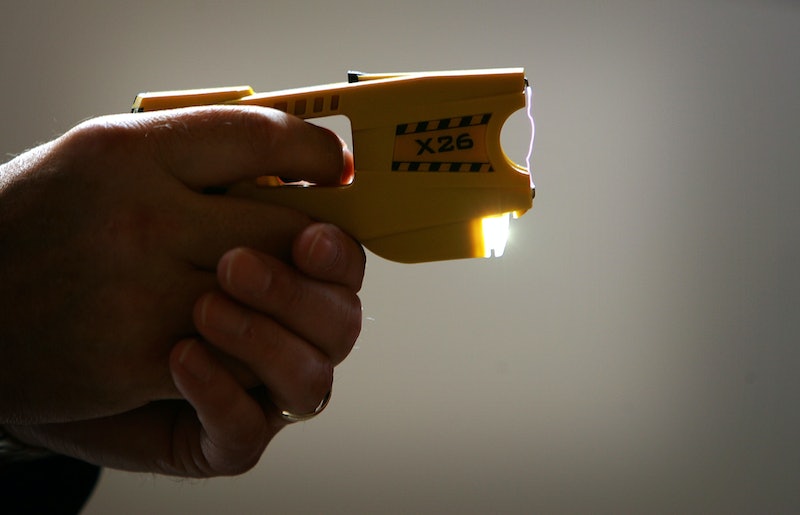 Fraternities are not having a very good week. As the University of Oklahoma continues to reel from the shocking racist chant from a busload of Sigma Alpha Epsilon members, another fraternity several states away has been kicked off campus. On Tuesday evening, Washington and Lee University suspended the Phi Kappa Psi fraternity for allegedly using a Taser on a pledge. (Update: In a statement on Friday, Washington and Lee University president Kenneth Ruscio made the correction that the weapon used by the Phi Kappa Psi member was a stun gun, not a Taser.)

According to a statement from university president Kenneth Ruscio, a Phi Kappa Psi member reportedly fired a Taser at a pledge during a fraternity-sponsored event. The incident was brought to the university's attention on March 6 by an anonymous tipster, who filed a report through the school's online hazing form. Ruscio confirmed it was "a specific and credible report." Following an investigation, Ruscio said the university concluded:

The fraternity [Phi Kappa Psi] engaged in activities that clearly met specific criteria that define hazing in the Student Handbook. As part of a fraternity event, a member used a Taser on one new member and to intimidate other new members. Fortunately, no one was seriously injured.

The decision to suspend the fraternity was made during a student-led hearing Tuesday, which included members of the Interfraternity Council (IFC). However, the student panel and university administrators seemed to have different views on punishment.

The IFC members voted to suspended Phi Kappa Psi for just 18 months, stating: "We believe that the nature of the charges reflects a lack of responsible new member education oversight by chapter leadership." The students added that the incident does not — I repeat, does not — reflect "a pervasive flaw within fraternity culture."

But Ruscio felt 18 months was hardly enough punishment for using a Taser on a pledge. The university president decided to suspend Phi Kappa Psi for three years because of the serious and disturbing nature of the hazing:

This was a case of clear physical abuse, harmful enough as it was, but under the circumstances potentially even more dangerous. It was a specific act that occurred in a climate of intimidation that existed throughout the fraternity's new member education program.

Ruscio said that he consulted with the Phi Kappa Psi national organization before handing down this harsher penalty. He added:

I am, of course, disappointed that I must take these actions. I would hope and expect that all of our students would understand the obligations they have as members of our community. ... I am asking once again that all our students recommit to the highest values for which they purport to stand, and to be at the forefront in defining a campus culture that is based on treating every person with dignity and respect.

The Washington and Lee president is the latest university head to take such a strong and direct stance on fraternity violations. It seems like Ruscio took a note from University of Oklahoma president David Boren, who has been praised for his prompt response and firm actions in the wake of the racist "SAE, Never Going To Sign With Me" video. Boren quickly investigated the video, gave SAE 24 hours to close down its house, and eventually expelled two students identified in the disturbing video.

Boren not only took quick action in condemning the video and the students caught on tape, but has also been supportive of the student protests taking place on campus. In fact, he's encouraging the demonstrations and has been urging students to continue to mobilize.