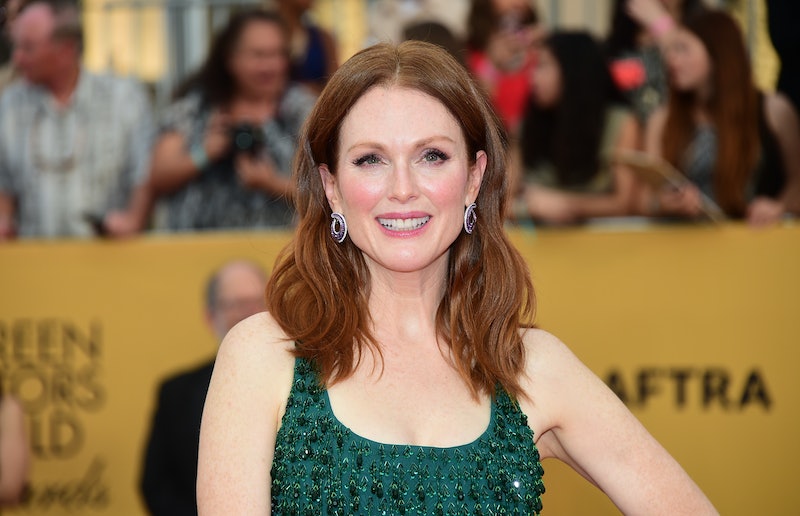 The E! Network has had a rocky few weeks lately. What with the racist remark made by Giuliana Rancic and Kelly Osbourne leaving Fashion Police, E! probably wasn't looking for another dart to be aimed at their Pop of Culture balloon. Today, however, yet another big star launched a dart (although much less pointy) at them. This time, Julianne Moore denounced their mani cam in the April 2015 issue of Harper's Bazaar.

Speaking to the magazine, Moore explained, "I'm 54 years old. I can't make my fingers walk; it's humiliating." At the 2015 Screen Actor's Guild Awards, Moore, alongside Jennifer Anniston, refused to participate in E!'s gimmicky attempt at showcasing actresses' jewelry and manicures. Moore went on to discuss why she refuses certain red carpet requests, detailing a time when she was asked to raise her skirt in order to showcase her shoes. "Let's keep some dignity," she stated, driving home the point that actresses are consistently put on display for public consumption.

Moore and other stars' criticisms of the mani cam have seemingly not gone unnoticed by E!. At the network's Grammy coverage, the mani cam was markedly absent. Then, at the Oscars, the super odd and honestly, kind of offensive, camera was pulled from coverage of the red carpet due to "space constraints." With actresses already under microscopic scrutiny on red carpets, did E! really need to ask them to parade their fingers down a mini runway? I think not. Thankfully though, it appears as if the mani-cam will be no more during red carpet season, and like me (and Elisabeth Moss), I think Julianne Moore might be pretty happy about that.