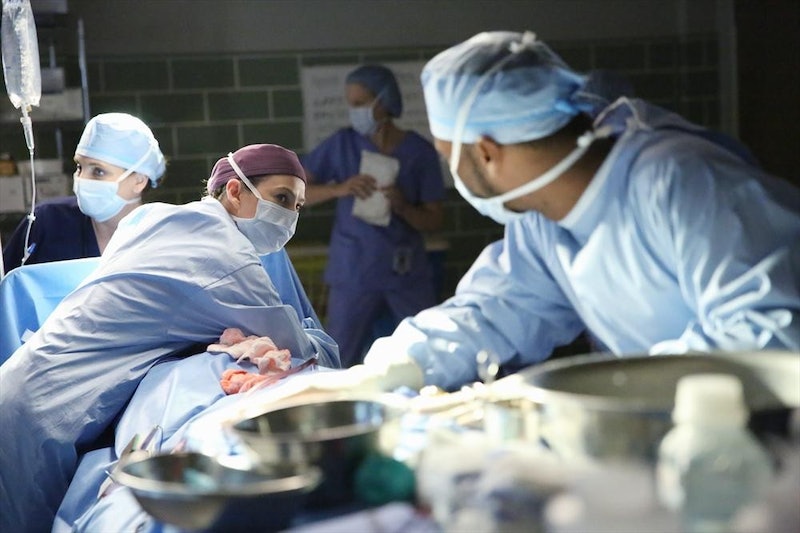 I say this every time Grey's Anatomy pulls another dramatic disaster storyline, and I'll say it again now: Why do these people continue to work at this hospital where only bad things happen? Maybe it's because the doctors are all insanely good looking. Maybe it's all that state of the art equipment. Or maybe it's just because most of them would have been fired for the shenanigans they pull if they worked at another hospital, but regardless, Grey Sloan Memorial better brace itself, because the next disaster is rolling through. On this week's episode — aptly tilted "I Feel The Earth Move" — Grey's Anatomy is dealing with a major earthquake that hits Seattle, presenting a ton of new obstacles to the docs and their patients.

Natural disasters have long been fodder for Grey's storylines, so this earthquake is just another scary situation that these poor people are more than used to dealing with. Obviously they're a good source of drama — and, you know, those emotional character injuries and deaths that Shonda Rhimes loves to pull on us — so a little bad weather isn't anything we haven't seen before. I'm just hoping that it doesn't mean anyone has to die, because haven't we been through enough this season? After everything that happened with April and Jackson's baby, I'm officially emotionally spent for awhile.

Here are all the natural disasters that Grey's has faced, and the best moment each brought about. I feel bad for these doctors, but I'd be lying if I said it wasn't damn good TV.

Best Moment: George being a total badass at the heart surgery he has to perform when the power goes out and he gets trapped in the elevator, because George is the best and I'm still mad that he died.

Best Moment: Cristina gets struck in the stomach by an icicle, and Owen comes to her rescue. Also noteworthy is the fact that this is Owen's first episode and their first meeting, and it's kinda cute. Also when those cool old lady BFFs drove their unconscious limo driver to the hospital after getting into an accident and later, one finds out another one of them is cheating with her husband. Yikes!

Best Moment: The doctors have to talk a man through amputating his wife's leg when she's trapped under her car, because if anyone goes down into the sinkhole, it will collapse, killing both of them. Eventually, Owen is able to go down and help him, because seriously, having to cut your wife's leg off? That could've been the most horrifying thing to ever happen on Grey's.

Best Moment: Meredith goes into labor and needs a c-section, even though the power is out and for some reason, the hospital has barely any flashlights. Thankfully, the baby is OK, and for once, this show gives us a happy ending.