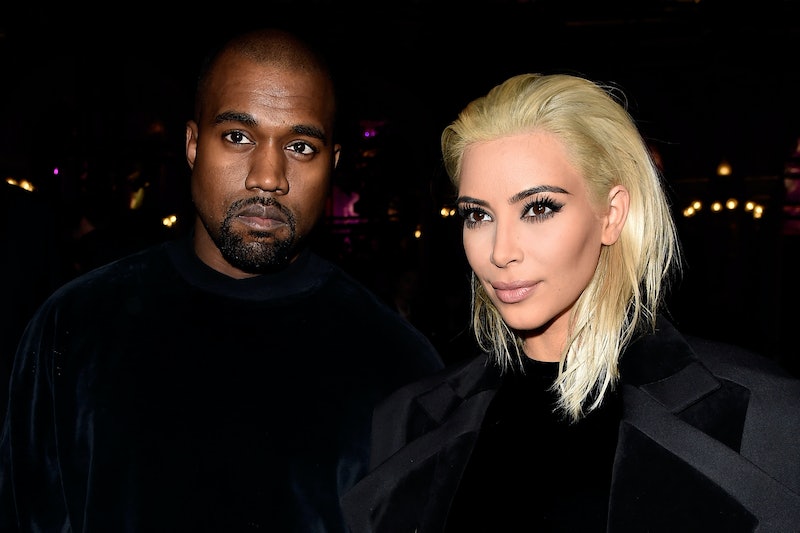 If you haven't gotten enough of Kim Kardashian with her recent gone-blonde hair news, you're in luck — Keeping Up With the Kardashians Season 10 premieres on E! on Sunday night. Kim isn't super blonde on the show (yet), but according to E!'s press release, the longrunning series will chronicle life after the finalization of Bruce and Kris Jenner's divorce, jaunts to Fashion Week, and of course a little drama over last year's incredibly profitable and addictive mobile game Kim Kardashian Hollywood. But where's Kardashian's hubby in all of this? Will Kanye West appear on KUWTK? While daughter North is reportedly off limits to the cameras, there hasn't been confirmation that Yeezy will make an appearance this season, but plots will definitely involve him.

I mean, they're married. If Kim can find her way into his music videos, Kanye can definitely find his way into her TV show. And he has definitely made it into the show in previous seasons, as he's been shown raiding Kim's closet, rapping about his lady love, and rehearsing for the couple's famous wedding. Now that Kim and Kanye are married and have a cute little daughter, what could be next for the couple? Well, Kim seems to have some very well publicized baby fever, as in she wants Baby No. 2 so badly.

And as the promos for the new season have been advertising, they've definitely been trying. Hard. So Kanye's definitely present in that process. Here are a few times when Yeezy could pop up onKUWTK, if he isn't cropped and edited out.

The couple is trying so hard for their second child they're willing to try literally anywhere. In the E! commercial for the new season (above), Kim's sister Khloe realizes she just walked in on the aftermath. "Was Kanye just here?" Khloe asks. "You didn't bone in a bathroom. That's how hard you're trying?"

I'm sure she's exaggerating, but Kim claims she and Kanye are having lots and lots of sex to increase the odds of conceiving their second child. "I've been having sex 500 times a day," she says in the above promo for the 10th season. Khloe has the reaction many would have at the TMI revealation: "Ugh!"

Moving Out of Kris' House

This season, Kim and Kanye will move into their own abode, but not without some drama first. There's a lot of tension between the mother and daughter living together, so they decide to call it quits. But that's not the end of it. According to TMZ, there might be cookware-stealing and rock throwing. Maybe Kanye will step in to help make peace between the two, or come to Kim's defense.

Sounds like another very Kardashian season of the show.