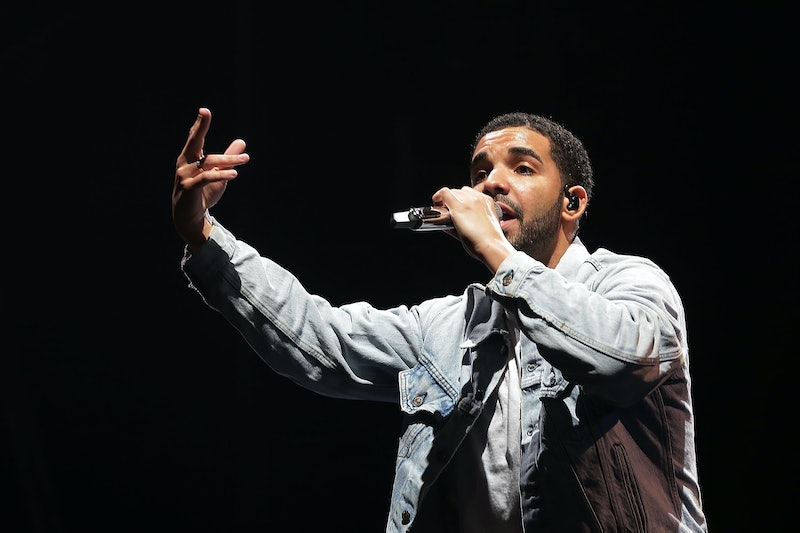 When Drake first hit the music scene, I found it really hard to take him seriously as a rapper. After spending so many seasons watching the Canadian TV show Degrassi , on which Drake — then known as Aubrey Graham — played popular-though-bland jock Jimmy Brooks, telling me that Jimmy had moved to America to become a rapper was just a laughable image to me. However, Drake more than earned his stripes — for his music, for dating Rihanna, and for that time P. Diddy punched Drake in the face. But just because he has long since left his Degrassi days behind doesn't mean he doesn't reflect back upon them fondly. Especially in his music.

Sure, Drake referenced Degrassi a lot more in his earlier songs, or between-albums-songs, than he has in his more recent stuff. However, even when he's not directly talking about the show, there are lyrics that can be pulled and interpreted to fit some Degrassi plot lines from his Jimmy Brooks days. The sweet thing is that, even at his current level of success, Drake still appreciates his roots on the Canadian dramedy gold mine that is Degrassi. So let's reflect on the times Drake talked about the show, directly or indirectly.

"They like, 'Damn, who's Drake? Where's Wheelchair Jimmy at?'"

Explanation: As every Degrassi fan vividly remembers, Drake's last few seasons on the show as Jimmy Brooks featured a Jimmy Brooks that had been confined to a wheelchair after a school shooting. It wasn't funny at the time, but once Aubrey Graham became Drake, Wheelchair Jimmy became a lyric, a dance move, and a meme.

"5 a.m., going shoot Degrassi up on Morningside. For all the stunting, I'll forever be immortalized."

Explanation: This lyric is self-explanatory since it outright mentions the title of the show. And now we all know when and where Degrassi shoots, if things haven't changed since this song came out.

"I'm the reason you can find my city on an atlas page... and I'm still spending money from my acting days."

Explanation: I mean, even if this whole rapping thing hadn't worked out, Drake would have still had a lucrative career either returning to Degrassi or turning his Degrassi career into a hit TV show in America. You know, like Nina Dobrev.

"I'm the same yellow boy that used to play up on Degrassi."

"They trying to shoot down my flight, before it lands."

Reason: This could just be my own morbid thought, but the reason that Jimmy Brooks ended up in a wheelchair when he was on Degrassi was because he got shot while trying to flee from the boy who had brought the gun to school. That's one horrifying way of having your "flight" shot down.

Reason: Later seasons of Degrassi saw Jimmy began to develop a surprising interest in art — one that helped him bond with his unrequited crush Ellie Nash.

"I know they say the first love is the sweetest, but that first cut is the deepest."

Reason: Every Degrassi fan remembers the saga of Jimmy and Ashley Kerwin, mainly because they dated times (well, two and a half) times and were basically different people every single time they went out with each other. Ashley broke Jimmy's heart, so I could see Jimmy identifying with this Drake lyric.

"My sophomore, they was all for it. They all saw it. My juniors and senior will only get meaner."

"You and the six raised me right that sh** saved my life."