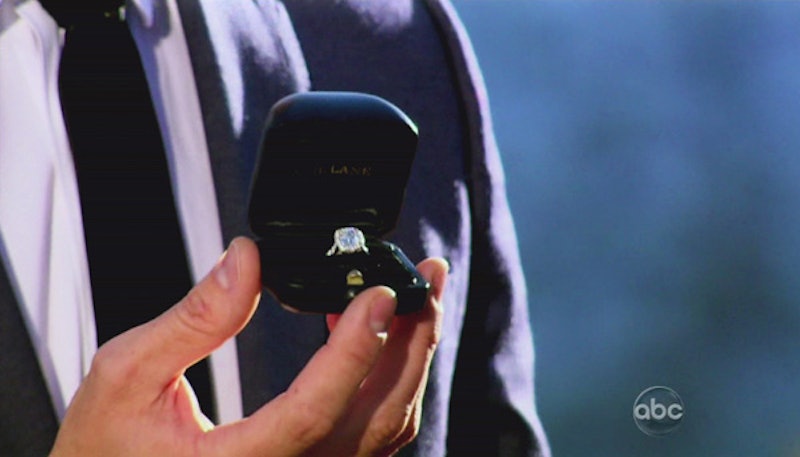 Fun fact for every Bachelor fan to note: There have been four promise rings and 11 engagement rings given out in The Bachelor's history. That's a lot of rings, even for the most seasoned Bachelor fan to keep track of and remember. Although in recent years, most Bachelors have chosen cushion-cut diamond rings set in a halo, not all rings in the show's extensive history have been that similar: Some have been exceedingly fancy, others low key — and they're not all designed by Neil Lane.

Over the past few seasons, the jewelry designer has become synonymous with The Bachelor, but once upon a time the show used jewels from other companies like Tacori and Harry Winston. One Bachelor even bought his own ring (and later sold it on eBay when the relationship didn't work out).

With 13 years of proposals under its belt, The Bachelor has seen a lot of engagement rings slid onto the fingers of their contestants. Let's take a walk down memory lane and rank the bling from worst to best. (Although, let's be real, there's no free ring that's "the worst.") I'd be grateful with a fleck of diamond from any of these exquisite rings.

Stork decided he wasn't ready to propose to Sarah Stone in Season 8. Instead he pulled a Carrie Bradshaw and put the engagement ring on a necklace for Stone as a promise ring.

He picked Brice to be his girlfriend in Season 7, but didn't propose to her. Instead O'Connell gave her a $20,000 promise ring that she later sold on eBay when they broke up.

This Tacori ring played an interesting role in the couple's five-year relationship. In 2007 Delgado was arrested for domestic violence when she punched her fiance Velvick in the face and split his lip with her engagement ring. I guess 3.5 carats will do that to you, but as a result it kind of taints the beauty of this Season 6 ring.

The happy couple only lasted a month, which isn't that surprising considering Guiney wasn't ready to propose during the Season 4 finale. Instead he presented Gardinier with a 2-carat Harry Winston promise ring worth $42,000. After their split, Gardinier auctioned off the ring.

Mesnick later changed his mind and broke up with Rycroft minutes after his Season 13 finale aired. Poor Rycroft hardly got to wear her ring at all before she had to hand it back over. It's a shame because the Neil Lane ring was a huge one at 3.18 carats with 170 stones surrounding the center stone.

Schefft's ring was a 2.8 carat Harry Winston featuring a prominent center jewel and a silver band. Classic and elegant, it's not the worst. But, believe it or not, there are better rings out there than this Season 3 beauty.

Borghese declined to propose to Wilson on Season 9, but offered her a promise ring that was designed by his mother. There aren't a whole lot of details on the ring since it wasn't provided by the show and the couple split just two months later — but it looks simple, pretty, and totally Bachelor-worthy in this picture!

This Season 2 Bachelor is the only one who ever purchased the engagement ring himself. He didn't do bad either, with a 2.75 carat Harry Winston oval diamond for $29,000. After the pair broke up a month after the finale they sold the ring on eBay for $28,300 and split the profits. Not only is the jewel super pretty, but I think it's so sweet that Buerge purchased it on his own. If I were Eksterowicz I'd be honored that he took the time (and money) to do that.

The Tacori sparkler was one of the show's more modest rings. With just 3 large round stones it came in at 2.85 carats. Although the pair split four months after the Season 12 finale, Lamas stated her intention was to keep the ring.

The Season 14 Bachelor only made it three months with his finale pick, which meant that Girardi eventually had to return the sparkling show-provided ring. The 71-diamond ring was 2.72 carats and was worth $50,000. It kind of reminds me of a (slightly smaller) Kim Kardashian engagement ring, and I love it.

Back in Season 10, the show went very low-key with this simple Chopard ring. The cool thing about the reported $50,000 ring was that the diamond was conflict-free and obtained in the most ethical way possible.

The Season 15 couple couldn't make things work, but not for lack of expensive jewelry! Maynard's Neil Lane engagement ring cost $50,000, but of course came free to the Bachelor. The 3-carat gem featured a large gem surrounded by 263 round-cut diamonds.

The Season 19 Bachelor proposed with a beautiful 4-carat, square-cut ring designed by Neil Lane, of course. It costs a reported $92,000, which is the highest valued Bachelor ring ever.

Although Robertson had to return the ring when she and Flajnik broke up, it was beautiful while it lasted. The Neil Lane diamond cost $50,000 and was over 3-carats. The center cushion-cut diamond was surrounded by 96 round-cut diamonds and an intricate leaf pattern. It's that clever detail that made me put this Season 16 beauty so high on the list.

Giudici is the proud owner of several Neil Lane rings, as he also designed hers and Lowe's wedding bands. But it's her Season 17 ring, at 3.15-carats with a cushion-cut engagement jewel, that really shines on her finger (for the price of $75,000). It's such a pretty ring, and being that she and Lowe are the only Bachelor couple to have walked down the aisle, she deserves to have the best ring of them all.