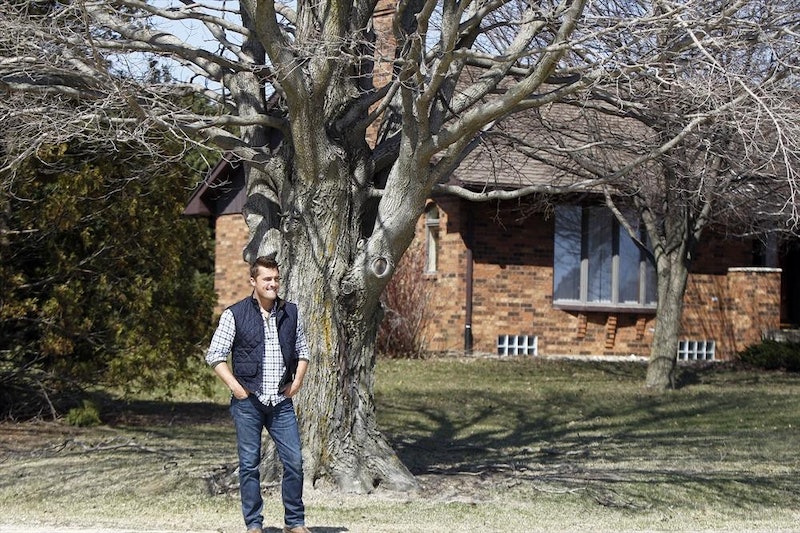 Even though The Bachelor has been on the air for 19 seasons now, there's still so much fans don't know about it. The show keeps production very tightly sealed, and even how they treat contestants is a closely guarded secret. Fortunately Sean Lowe has written a book which exposes Bachelor secrets to the world. For The Right Reasons details Lowe's time on Emily Maynard's season of The Bachelorette, as well as his own journey to love during Season 17 of The Bachelor.

Lowe had the unique opportunity to experience both versions of the show (Bachelor and Bachelorette), and as such his memoir takes a close look at being both a contestant, and the man in charge. Although it's entirely possible rules have been changed on the ABC show since his 2012-2013 stints on the show, his book gives fans a behind-the-scenes peek at the world behind what ABC chooses to show on your television screen.

He spills on everything from what contestants must pack (in only two bags, no less!), why no one eats the date food, and just how expensive that engagement ring is. In short, it's an all-access pass to his seasons of the show and the perfect book to read as we embark on new Bachelor Chris Soules' journey. Now that we have all the dirty details, it makes watching the show even more interesting.

Contestants Have to Buy Their Own Wardrobes

They're required to bring a variety of clothes for warm or cold climates, fancy occasions, athletic activities, etc. Plus they have to pack at least 14 rose ceremony outfits just in case they make it all the way to the end. It's yet another example of how being on The Bachelor/ette is an opportunity only afforded to those affluent enough to leave their careers for months at a time and to be able to buy a whole new wardrobe.

In an effort to make everyone look good on camera, Lowe said there were a lot of clothes he was instructed not to bring. Among them: "stripes, small checkered patterns, big patterns, and solid white." It's a wonder they even let Marquel Martin and his wardrobe on the show at all.

They Have to Undergo a Lot of Tests

The show is pretty serious about who gets on, and it requires all contestants complete a questionnaire about their lives, take an STD test, complete a psychiatric evaluation, and be seen by a psychologist. If anyone on the show is "crazy," they got that way after being cast.

Fans of the show were surprised this year to see the first night's castoffs left during the light of day. But the long rose ceremony wasn't unique to Chris Soules' season. Sean Lowe says his didn't wrap filming until 6:00 AM. Everyone was so tired that Chris Harrison "went into the kitchen and made everyone breakfast burritos." He's the sweetest show host ever.

Sean Was Allowed to Bring a Book

Almost everything from cell phones to music is banned in the house, but during Lowe's time as a Bachelorette contestant he was permitted to bring a book. Granted it was Jesus Calling, so maybe the producers figured it just added to his Christian good-guy vibe. No word on whether the other guys could also bring reading material, but it's a relief to know they aren't totally sequestered while on the show. I mean, even prisoners get to read, so should the contestants.

The Number of Kisses Shown is a Lie

Lowe revealed that his first kiss with Emily Maynard was cut from broadcast, and instead his second kiss with her was portrayed as their first. Just imagine if Chris Soules' season also cut down on kissing. He's already made out with more women than any other Bachelor as it is. I would love to know if his cutting room floor is littered with even more smooches there wasn't time to fit in.

In Fact, a Lot of Important Moments Happen Off Camera

Despite production's "iron-clad rule [of] no interaction off camera," Lowe revealed that several big things happened off screen. For example, during his season, he and Catherine Giudici had several sweet moments not caught on camera. A late night hug, an hours-long ride back from their one-on-one, the opportunity to destroy the set of their romantic dinner, and a late-night talk the night before the proposal. Though Lowe is careful to say no momentous conversation happened during those occasions, I think the extra time spent together certainly helped them form a bond.

It's important to remember that hard as they might try, the cameras can't capture everything (like Juan Pablo's rude helicopter comment), and they don't show us everything either. The Bachelor/ette is ultimately telling a story and they decide how the audience sees the footage they have captured.

You're Not Allowed to Eat the One-on-One Food

I always thought skipping munching on that romantic dinner was a personal choice contestants made to keep from talking with their mouths full on national television. But Lowe revealed that you're actually not permitted to eat the food.

Before we went on the date, the producers sent food to our hotel rooms. We ate in our rooms and then went out for dinner, where we would be given beautiful food arranged nicely on the plate. This was just for show. No one looks good eating, and microphones pick up all kinds of chomping.

It Takes Forever to Send Someone Packing

If the Bachelor or Bachelorette sends you home any time besides the rose ceremony, it's a lengthy process. Even if a contestant decides on their own that they have to go, they're probably not actually getting out of there for a few hours. Lowe says first the contestant has to tell the Bachelor/ette, then they have to be filmed leaving, then the reaction to the contestant leaving is filmed, etc. It can turn an already tearful goodbye into a two-hour long ordeal.

The ever demure Emily Maynard decided against letting the men into the fantasy suite with her because she is a mother. But Lowe reveals that when he was on her season, after the cameras stopped rolling she invited him back in. They didn't sleep together, but they did stay up all night talking in the camera-free zone. So remember kiddos, even the purest of the pure may have invited the opposite sex into the fantasy suite once the cameras were off.

There's a Reason for All Those Picnics

Ever wonder why practically every one-on-one includes a picnic? According to Lowe, that's because "they give couples a picturesque moment to chat." It's all about that scenic view and those deep conversations, of course.

The Bachelor Can Basically Get Whatever He Wants

Producers are supposed to keep the contestants away from the Bachelor when the camera is off, there's supposed to be no access to Internet, and family isn't allowed until the final week. Buuut, if you're the Bachelor, you also sometimes get to make your own rules and what is production supposed to do about it? You're their star after all.

Lowe details several times he begged for things he shouldn't have had and the production team acquiesced to his requests. Among them was the time he asked to drive back from a one-on-one with Catherine, even though the cameras would be off. They agreed so long as the couple didn't talk. Another time Lowe asked that his sister be allowed to come on for a week and advise him on whether he should keep Tierra or not. They allowed her to appear as long as their talk was filmed. And finally, Sean writes about the time he snuck onto the Internet after cajoling a producer into letting him use his iPad to listen to music.

Of course, the second he was left alone with an Internet connection he googled his final two and their ABC profiles. I'm sure writing about that in his book has gotten some poor producer fired and ensured that no Bachelor ever gets an iPad again, but oh well. Just goes to show that when you're the talent sometimes you can get your way if you whine enough.

The Proposal Sites Are So Much More Glamorous Than You Thought

Turns out those fancy pond and bridge-bedecked scenic proposal spots are literally constructed to look that beautiful. You couldn't find those locations if you tried because they existed only for the show. Lowe says his own spot was built through weeks of work. "They planned a gorgeous setting, including a bridge and a pond they'd dug just for the occasion," Lowe writes in his memoir.

No wonder everyone feels pressured to propose! A hand-crafted proposal site is pretty once-in-a-lifetime, a fact producers made sure Lowe knew when he was deciding whether he should propose to Catherine.

The "in the moment" interviews that are sandwiched between portions of dates or rose ceremonies aren't always in that exact moment. Lowe revealed that for his Bachelor season, production kept all of his clothes arranged by date so they could go back and fill in with some interviews months — that's right months — later.

I'd say things like, "I'm having a blast with Des tonight, and I can't wait to see what the future holds." It wasn't disingenuous, because I expressed what my true feelings were at the time. Mainly, it was boring.

Perhaps it was boring for Lowe, but I find it hilarious that we see the Bachelor saying things like, "I could see myself falling for so-and-so" when they might possibly already know the outcome of the show. This is possibly my favorite tidbit from the book. I knew the ITM interviews weren't always done that second, but I figured they were at least done within the same week. Now I know the truth, and you do too. Reality TV is a total lie, folks.

The Ring Costs a Fortune

The truth comes out: Lowe writes that his wife's Neil Lane diamond engagement ring cost a whopping $75,000. Now if that's not reason enough to go on the show, I don't know what is. (Besides, like, true love and whatever.)

For the Right Reasons , aka a treasure trove of Bachelor secrets, is out now.