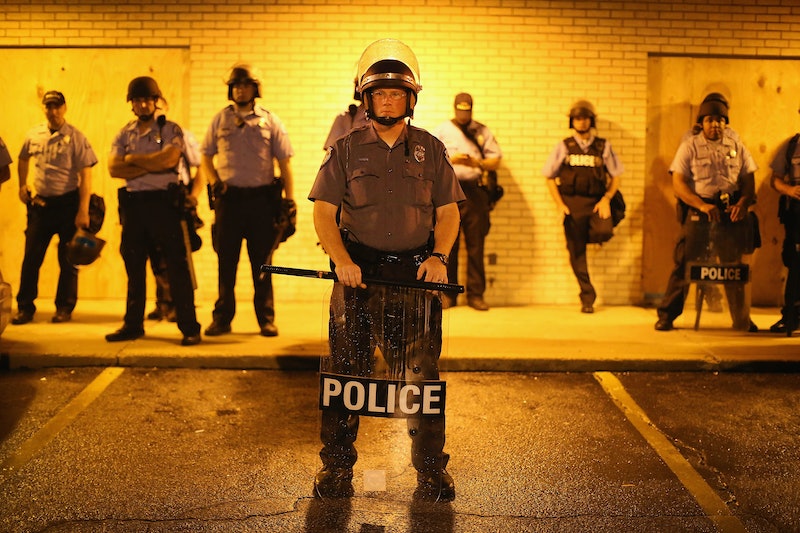 After months of speculation and pressure, Ferguson Police Chief Thomas Jackson announced his resignation on Wednesday. Even though protesters had called for him to step down months ago, Jackson's announcement sparked a fresh demonstration in Ferguson, and two Ferguson police officers were shot by an unknown assailant outside the Police Department headquarters while overseeing the protest rally.

Tensions in Ferguson were reignited Wednesday afternoon when Jackson stepped down in response to the Department of Justice's damning report on the police department's routine discrimination against African-Americans. For many in the community, the decision was long overdue and one step of many that the city should have started taking months ago.

Though three high-profile figures have resigned in the last three days — Jackson's resignation came after Municipal Judge Ronald J. Brockmeyer and City Manager John Shaw stepped down earlier this week — some of the protesters gathered on Wednesday night to pressure Mayor James Knowles III to do the same.

While most demonstrators were there to celebrate Jackson's resignation, the ones who called for more action renewed the outrage by chanting, "Racist cops have got to go!" and holding up signs that read, "Knowles, you are next!"

Over the course of the relatively modest protest rally, the tension between protesters and officers escalated quickly. Here's the complete timeline based on what we know so far.