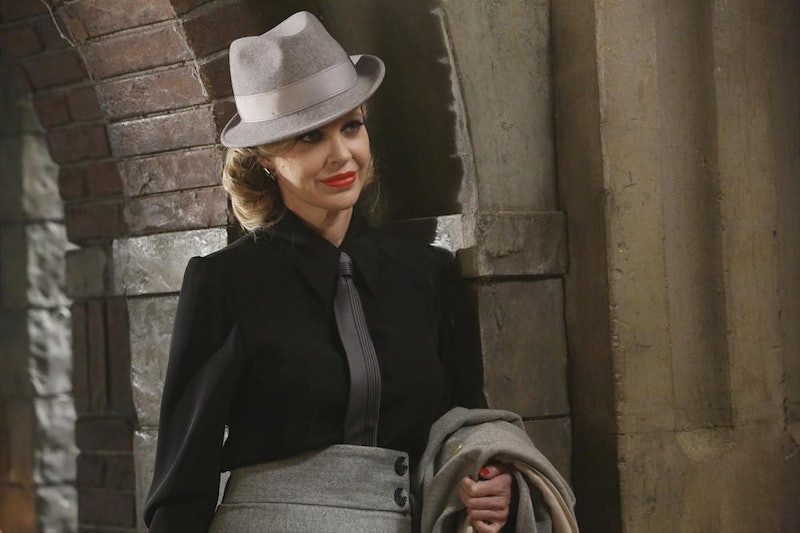 The return of ABC's fairytale drama Once Upon a Time brought with it some very troubling news. It turns out Snow White and Prince Charming aren't the ultimate do-gooders we thought they were since, according to Snow, they're the reason Maleficent lost her child. (I know, I'm still having a hard time wrapping my mind around it.) However, there may be more to this story than meets the eye. You see, the OUAT writers chose Snow's words very carefully here, saying: "Because of us, Maleficent lost her child." The key word to focus on here is lost. On the one hand, we could interpret that to mean the child tragically died somehow due to Snow and Charming's actions. But it also leaves the possibility open that Maleficent's child is still alive on OUAT .

Think about it. This series is known for incorporating huge plot twists and it certainly wouldn't be the first time someone who was thought to be dead, suddenly shows up out of nowhere. (Remember when Rumple thought Belle was dead for all those years?) Plus, I have a hard time believing that the show will want to paint Snow and Charming — two of its most beloved characters — in such a negative light forever. Having the child still be alive would mean that there's hope for their redemption in the eyes of both the town and viewers. But if the child truly is gone, then this is one sin that will prove to be unforgivable, leaving them pretty much deserving of Maleficent's wrath.

So just for the sake of argument, let's try to think positive and say the child is somehow still alive without either Snow or Maleficent's knowledge. Who is this person and where is he or she now? Odds are that it'd be someone we already know, and if I was a betting person, I'd put my money on Emma's childhood friend, Lily, who we briefly met earlier this season in the episode "Breaking Glass."

If you recall, Lily used to be an orphan just like Emma, but lied about the whole adoption part as a way to bond with her newfound friend. However, she still felt invisible and unhappy there — almost as if she didn't somehow belong. Perhaps that's because deep down she knew her destiny belonged somewhere else, like with her birth mother, Maleficent. She kept insisting that she was just like Emma, which could be more true than either of them initially realized. So given that Emma was born into an iconic fairytale family, there's a good chance Lily was as well. And let's not forget about that unique birthmark of hers…

Lily told Emma that she liked to think of it as a symbol of how special she was, kinda like Harry Potter, meaning she was meant to do greater things with her life. Well, being the daughter of a world renowned villain would certainly fit that criteria. Of course, this could all just be wishful thinking on my part, though it should be noted that Lily is scheduled to return later this season in Episode 19. In fact, the title is even named after her, which seems to indicate her role will become very, very important.

Could this just be a coincidence? Maybe. But on a show like this, I highly doubt it. Maybe Maleficent will end up getting her happy ending after all.