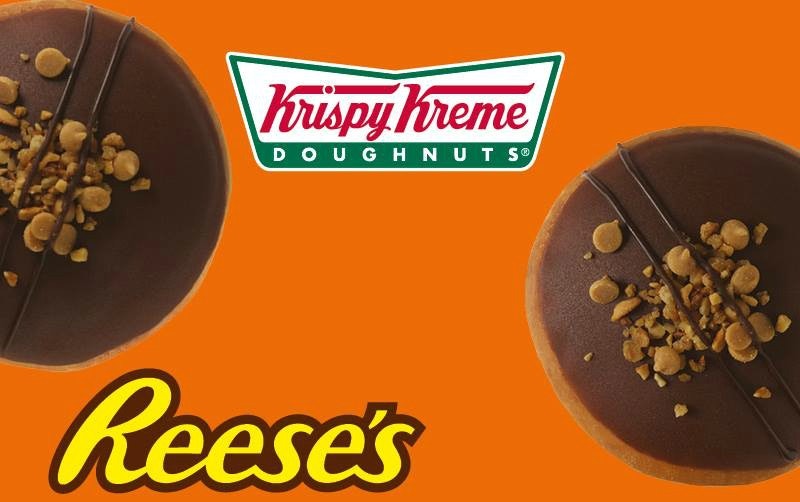 You're killing me with all these wacky and amazing donut creations, Krispy Kreme. Hot on the heels of yesterday's donut dog, we have this: Krispy Kreme UK made a Reese's Peanut Butter donut, and you guys? I want one even more than I wanted the Blue Rocks Special. But in both cases, I remain sadly donut-less; while the donut dog is exclusive to Wilmington, DE, the Reese's donut is available only in the UK. Why must you taunt me so, Krispy Kreme?!

According to Krispy Kreme UK's Facebook page, the Reese's Peanut Butter donut actually made its first appearance about a month ago. “We have some very exciting 'new arrival' news for you this Monday morning, with a new donut in our stores, a Facebook post dated February 16 reads. “The Reese's Peanut Butter donut!” It goes on to describe the creation in great detail, noting that it is “filled with… indulgent pure Reese's peanut butter, coated in a smooth chocolate icing, then hand decorated with authentic Reese's peanut butter drops and crunchy caramelized hazelnuts.”

You guys. There are hazelnuts. That means that basically, it is a Nutella peanut butter donut.

Although the Facebook post cautioned fans that, due to the donut's projected popularity, they “[didn't] expect it to hang around for long,” it still seems to be available now; Metro featured it just yesterday, as did USA Today and British blog Pot of Stuff. But time does seem to be running out for this limited-edition indulgence; according to Pot of Stuff, it will only be available until March 29 in all Krispy Kreme stores in the UK. It's priced at £1.90, which would be about $2.83 in the US… if we were lucky enough to have them. Which we aren't. Sigh.

For the curious, here's what the Reese's Peanut Butter donut looks like in real life:

If ever there was a donut to which the word “YOLO” applied, this would be it.

But hey, if you're Stateside, at least you can still submit your suggestions for the donut dog's name; word on the street is that there's a pretty awesome prize if you win, so… there's that. Sure, it's no peanut butter cup donut — but oh well. Can't win 'em all, right?