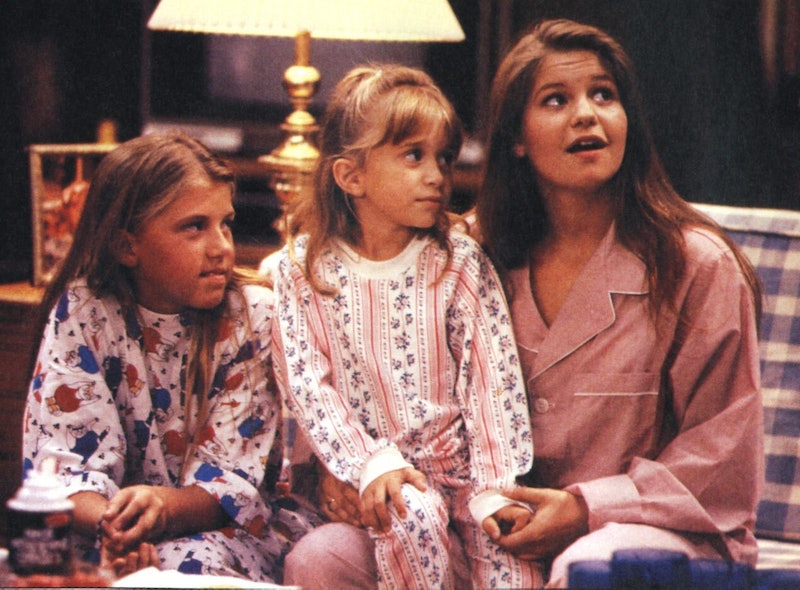 Like most children growing up in the '90s, my after-school activities followed a very specific schedule most days: snack time, refusal to acknowledge homework, and, finally, an episode of Full House . I loved the show for all the reasons you'd expect: the snappy dialogue, the hilarious plots, and the gift to the universe that is John Stamos. Yet I also worshipped the Tanners for a different reason; their loud and insanely big family. As an only child, I couldn't imagine what it'd be like to have even one sibling, let alone two, plus three psuedo-parents, an aunt, a dog, and various other people all living in the same house. It was too different a world to even comprehend, but I knew I wanted to be a part of it.

Unfortunately, I never gained a sibling or somehow teleported into the Tanners' San Francisco neighborhood. I did, however, watch every episode of Full House that ever aired a number of times, and even today, I find myself re-visiting the show frequently. It's just that the show is so good — especially in its depiction of a huge, close-knit family. The relationships between DJ, Steph and Michelle, especially, made me long to be a part of the Tanner crew. Below, 11 times Full House made me wish I had a sister:

When Michelle and Steph Snuck Off To New Zealand (Season 6)

Getting to fly across the world without parental supervision, even if it's by accident? Sounds great to me!

When Steph Shoplifted For DJ (Season 2)

DJ bought a sweater that got ruined. She and Steph went to get a new one, but they found out it was too expensive. So Steph decided that "buy now, pay later" meant shoplifting was totally allowed, and she took the new sweater with her. Sure, the whole thing was wrong of Steph, but it was so sweet how much Steph wanted DJ to be happy. It was especially nice considering that only a few hours earlier, DJ called her sister a "nerd bomber."

I was as heartbroken as Steph and DJ when Jesse and Becky broke up in Season 3, so I totally understood why they teamed up to get the duo back together. Even if the reason they did reunite had nothing to do with the girls' harebrained plan, the fact that Steph and DJ worked so hard to see their loved ones back together was admirable and sweet.

When They Tricked Michelle Into Thinking She Was Sick (Season 8)

What's the point of having a sister if you can't trick your other sibling into thinking they're suffering from a deadly illness? Michelle may not really have had "Smedrick's Disease," but boy, did DJ and Steph have fun making her think that she did.

When They Bonded Over Hating Boys (Season 5)

The same guy who kissed Steph also kissed DJ, and both girls were convinced they were in love before realizing how stupid it was to get so upset over a guy. Watching them swear to each other that they'd always come first was a wonderful display of sisterhood.

When They Teamed Up To Watch Tiffany (Season 2)

Nothing says sisterhood more than convincing your babysitter that you're totally allowed to stay up hours past your bedtime to watch a Tiffany concert on TV. And their perfectly awkward choreographed dance? That was the stuff my only child dreams were made of, at least back in the '90s.

Steph loved Mr. Bear, you guys! He was a present from her dead mom, and nothing broke her heart more than seeing him all torn up by puppy Comet. So DJ, being the amazing sister she was, sewed and taped him back together, just to make her sister happy.

When Steph Helped Michelle Get Used To Kindergarten (Season 5)

Michelle was super nervous about starting kindergarten, so much so that she escaped her classroom and interrupted Stephanie in fifth grade. Yet instead of getting mad, Steph brought Michelle back to her room and stayed with her for several minutes, introducing her to the other kids and making sure she felt comfortable.

When DJ Saved Stephanie From A Car Accident (Season 8)

Steph may have been mad when DJ refused to let her out of the house to go driving with Gia and some high school boys, but it was for her own good. DJ might've saved Steph's life by not letting her go out, and eventually, Steph realized that her sister was just looking out for her safety.

When Steph Moved In With Michelle (Season 5)

Steph wasn't thrilled about moving in with her baby sis, but she was even more upset about no longer being able to share a room with DJ. Their talk, in which DJ promised Steph that she was always welcome to visit/annoy her whenever she wanted, was loving and heartfelt.

Even thinking about Michelle's decision to use her final Princess for the Day wish to make Stephanie the Princess makes me tear up. Best sisters ever.