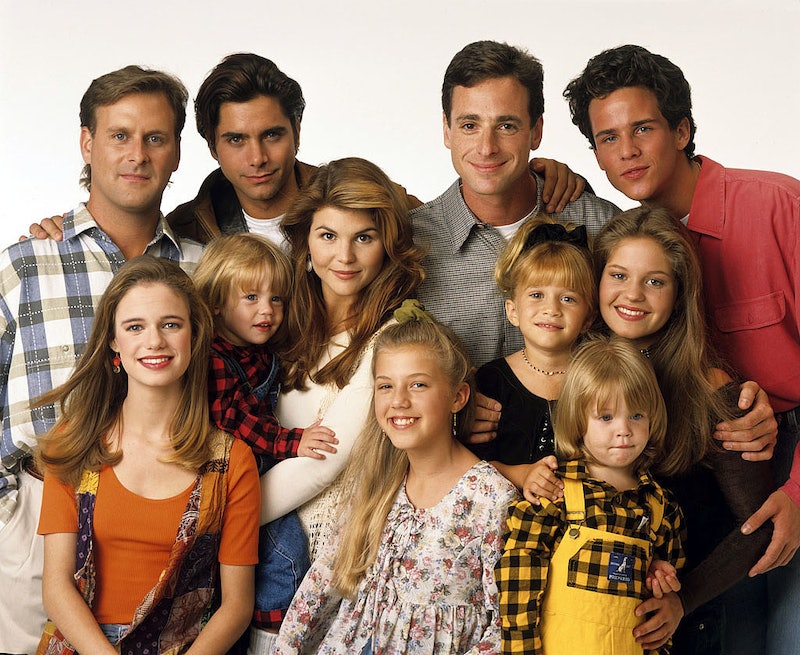 Of all the TV shows we '90s kids grew up watching and loving, few have had as much staying power as Full House . The beloved ABC sitcom, which aired from 1987 to 1995, is an iconic piece of pop culture, due as much to its memorable issue-of-the-week plots to the massive post-show success of so many members of its cast. And the constant, photographed reunions of its ensemble don't hurt, either; seeing John Stamos, Bob Saget, Lori Laughlin and the rest of the gang together so often has helped keep the show, and its actors, fresh in our memories.

Yet while fans have never had to wonder about what the cast of Full House was up all these years later, the 2015 antics of the characters they each played is still a total mystery. Did DJ and Steve end up staying together after prom? Is Danny still as neurotic a clean freak? And, most importantly: did anyone ever move out? While unfortunately, we might not ever know the answers to those questions for real (unless that revival series we're all dying to see actually happens), here's what I think the gang would be up to in 2015:

Last we saw of Danny, he was dating Claire, the mother of Stephanie's friend Gia, after meeting her at their daughters' make-out party. Unfortunate beginning aside, it's likely the relationship continued for awhile, if only because their teenage girls were already calling each other "sisters" and refusing to leave each other's sides.

Job-wise, he stayed on at Wake Up, San Francisco for a few more years, but eventually gave it up to pursue his childhood dream of becoming an Olympic high jumper and a maid. (I did not make that up.) Occasionally, he volunteers at the local high school, where he uses his former glee club obsession to coach the school's current team. He's competing against the New Directions next week!

Jesse started a new band towards the end of the series, and it's grown pretty big; sure, he's still relying heavily on his wife's Wake Up, San Francisco salary to get by, but he's having a good time and living out his lifelong dream. Problems arose when his twins grew older and refused to listen to his music, calling it "lame" and "embarrassing." He quit the band out of shame, but eventually got back on board. Most days, he can be found playing at the Smash Club, Googling "is Elvis alive?" conspiracy theories, and visiting the salon, where he struggles to find a solution for his ever-receding hairline.

In 2015, Joey hasn't changed much. He's still doing impressions, still making up characters, and still performing funny voices whenever someone asks him a question. The only difference is that now he's in an institution, where he was placed many years ago upon the recommendation of a horrified family friend who visited the Tanner house and discovered that Joey was living in the basement and playing with puppets all day. The rest of the gang visits on occasion, but it's too hard for most of them to see him there, even if he does seem to be happy with his roommate, Bullwinkle.

D.J. went to Berkeley immediately following graduation, but she quickly discovered that constantly moralizing, refusing to be around alcohol, and frequently mentioning her "Pillow Person" wasn't the best way to make friends. After a rough start, however, she found her way, and is now a happy stay-at-home mom to her two kids with Steve. It's not all perfect, however; she's secretly carrying on an affair with the recently-returned Viper, having grown tired of Steve complaining that "no one ever watches Aladdin , anymore."

Stephanie tried to become a professional dancer, but didn't find much success after saying "How rude!" every time she got rejected in an audition. She took on a couple odd jobs here or there, but eventually found her calling as an host of Wake, Up! alongside her Aunt Becky. She even had her own talk show for a few years, but when that failed, she realized she was better working with other hosts who could tell her when to shut up.

Michelle didn't let that scary accident deter her from pursuing her passion for horseback riding. She competed all throughout high school and college, only stopping when her longtime friend Derek asked her to manage his career as a pop star. Today, he's a very popular singer and host of The Voice, and she's doing quite well working behind-the-scenes. Somehow, she's the most sane member of the Tanner family. Blame it on the amnesia.

Unlike Danny, Becky is still happily working at Wake, Up!, acting as its most in-demand host and executive producer. She thought about doing her own show, but realized it'd be too much work managing a new job, the kids, and Jesse's hair appointments — some women really just can't have it all.

After years of therapy to deal with her neglectful parents and abusive next-door neighbors, Kimmy is now a successful real estate agent and happy mother of three. She is no longer in touch with any of her former friends. Despite the reassurances of many that the Tanners were just mean, she is still insecure about her body odor and takes three showers a day.