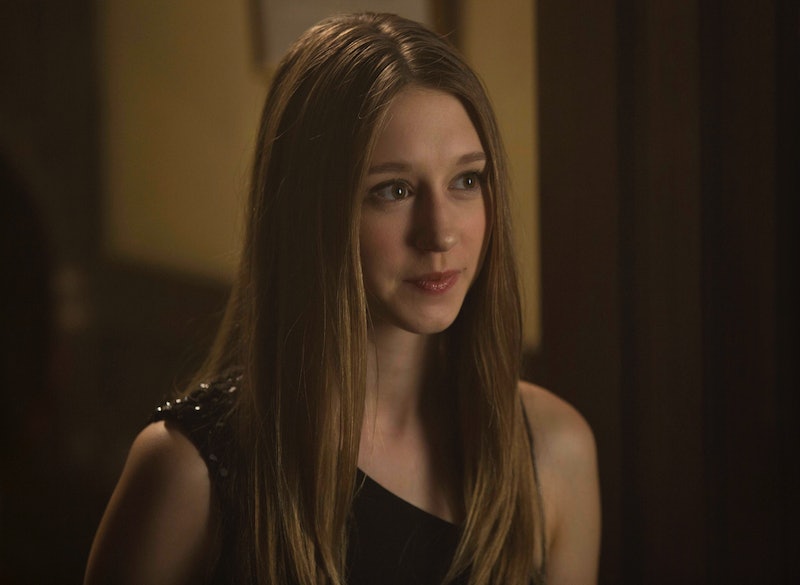 It was a little disturbing when, on American Horror Story: Coven , a young witch named Zoe (Taissa Farmiga) was revealed to have fatal lady parts — the blood-bursting-through-her-partner's-ears-nose-and-eyes kind of fatal. Suddenly, AHS was sounding a lot like Mean Girls gym teacher Coach Carr who threatened "Don't have sex, because you will get pregnant and die." Granted, the series weaponized Zoe's sex so that she was the one inflicting death, rather than the man potentially getting her pregnant (and dead), but it still breeds the same puritanical view: sex is bad, mmk?

Now, in episode two of AHS: Coven, we're treated to the inevitable balancing act of Zoe's sexual issues: her vagina kills men, but her kiss gives them life. She's practically a reverse Snow White: so impure her sex kills and so powerful she's able to restore life to sleeping boys. But is there some sort of sexual message in there somewhere? There is if you consider that Ryan Murphy, co-creator of AHS and Fox's Glee, rarely produces a story that doesn't have some motive or message behind it. But with Zoe, the idea is a little murky.

And that's because on one level, it seems that Zoe's "affliction" is a vehicle for her own independence. She's already used it as a weapon and now that she knows her kiss is life-giving, she'll likely be using that again. She is a teenager, after all. On the other hand, it feels a little like the ultimate plan for unwilling abstinence: kiss the boys all you want, but don't ever let them downstairs unless you want to kill them. It's a stereotypical over-protective father's dream. Add to that the ridiculous guilt with which Zoe is wracked after killing her high school boyfriend, and it's practically a recipe for a world that only tolerates G-rated fun.

It seems a bit puritanical for a series that broadcasts sex scenes like Sarah Paulson's in episode two, which finds Cordelia and her husband graphically switching sex positions while vigorously gyrating among candles and visions of snakes. While the tone was dark, the scene was undoubtedly produced to be sexy. So why push the series' main ingenue to celibacy when the series clearly doesn't see the need to censor sex elsewhere?

There is the possibility that upon sexing her partner to death, Zoe could then kiss them back to life. If that is the case, then Zoe might engage in truly strange sexual practices and flip the dangers of sex on its head. If she could recover the life of a young man who she's killed with intercourse, couldn't it be argued that sex couldn't possibly be the terrifying trap that our more conservative sex ed educators tend to profess? If Zoe's powers can function as a sort of system, the likely message could be saved after all.

Only time will tell, but I hope AHS: Coven finds a way to make sense of all this sexual nonsense — and a way that doesn't try to put sex in a dark, dastardly box. Women face enough judgement for engaging in sex at a young age; let's not add bursting veins and exploding brains to that pile as well.

More like this
Long Live Bennifer!
By Allie Jones
Why The '365 Days' Sex Scenes Are Good, Even If The Movies Aren’t
By Arya Roshanian
'Ghost In The Shell: SAC_2045' Was Only Supposed To Last Two Seasons
By Kadin Burnett
What’s New On Netflix: 'Stranger Things' & 'Somebody Feed Phil' Return
By Arya Roshanian
Get Even More From Bustle — Sign Up For The Newsletter