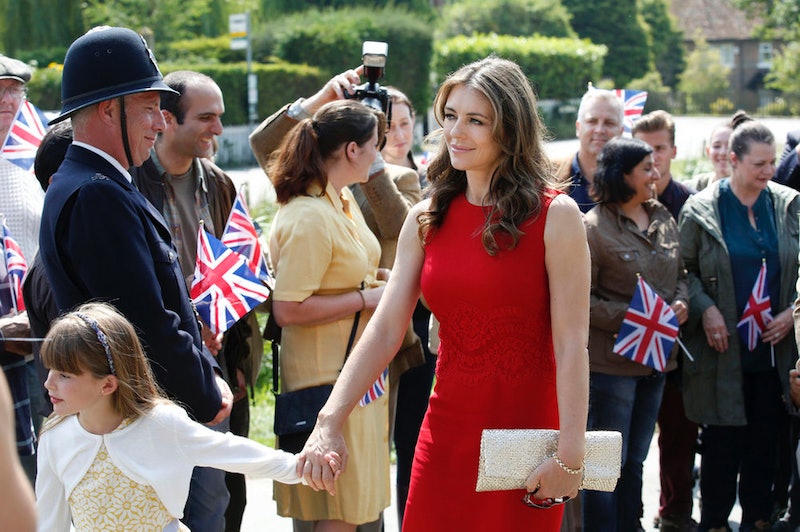 E! is trying to take advantage of the inherent mystery of the British royal family with their new original scripted series The Royals, about a fictionalized monarchical family. But is The Royals accurate about what the British royal family does? In short, no, the show is not trying to be extremely accurate, and if you really want a dose of reality all you have to do to find out is check out the British monarchy's official website. They've got pictures, news, and, yes, an official description of what their normal duties are... and nowhere does it say "being fabulous" or "dramatically entering a room," which seems to be a good percentage of Elizabeth Hurley's character Queen Helena's "responsibilities."

A lot of the decision-making is up to the monarch at this point — they can choose to be more involved with the matters of state or choose to be more of a figurehead position. As of now, under the 50+ years of Queen Elizabeth II's reign, the monarchy is largely symbolic. And there are some who think that if the crown is mostly meaningless, that it should be dissolved. That point of view is represented by Helena's husband, King Simon, who's "considering abolishing the monarchy," according to E!. Obviously that won't draw ratings for E!, so the rest of their version of the royal family is a bit more ambitious. Their son, Prince Liam, is like Harry if every weekend was that infamous Vegas weekend, including his hookup with an American girl. The twist is that Liam's older brother suffered a tragic death, making Liam the future King of England. The "spare heir" suddenly... not so spare. And Princess Eleanor is exactly the same, minus the adorable rom-com relationship.

The biggest part of the royal family's job is to represent the United Kingdom to the world. In the real world, that means being prim, charitable, and having great hair. On The Royals, it means something a little different... but the great hair thing does hold true.

The Real Royals Do Charity, While The Royals Prefer Partying

The real royal family spends a lot of their time advocating for different charitable organizations. The fictional royals, meanwhile, at least from the previews, look like they spend way more time out drinking and partying. Maybe that's just because Eleanor and Liam are younger and unmarried while William has two kids and Harry's hardest party days are behind him.

The Real Royals Represent the Queen, While The Royals Embarrass the Queen

The rest of the royal family is dispatched around the globe as administrators for the Queen, who, naturally, can't be in 100 places at once. It's the lion's share of their duties. But on this show, seems like the Prince and Princess resent their obligations, while any real Prince or Princess would be raised to show up on time with their upper lip appropriately stiff, no matter how hungover they are.

The Real Royals Accept the Hierarchy, While The Royals Aren't Above Scheming

Cyrus, King Simon's brother, comes second only to Scar in terms of "obviously evil brother characters based on Claudius from Hamlet." It's a surprisingly populous category. Anyhow, Cyrus' murderous scheming to get himself to the throne is something that would have made more sense hundreds and hundreds of years ago. He's more Tudor than Windsor.

The Real Royals Play It Close to the Chest, While The Royals Are All Over the Place

If there's one big difference between the real royal family and the fictional one from The Royals, it's that this TV version can't agree on anything. The king wants to dissolve the monarchy, his wife and brother are both scheming to control the crown themselves, and his kids are both screwups who love the wealth, but hate their responsibilities. The real royals could never have such differing points of view — it simply isn't done!