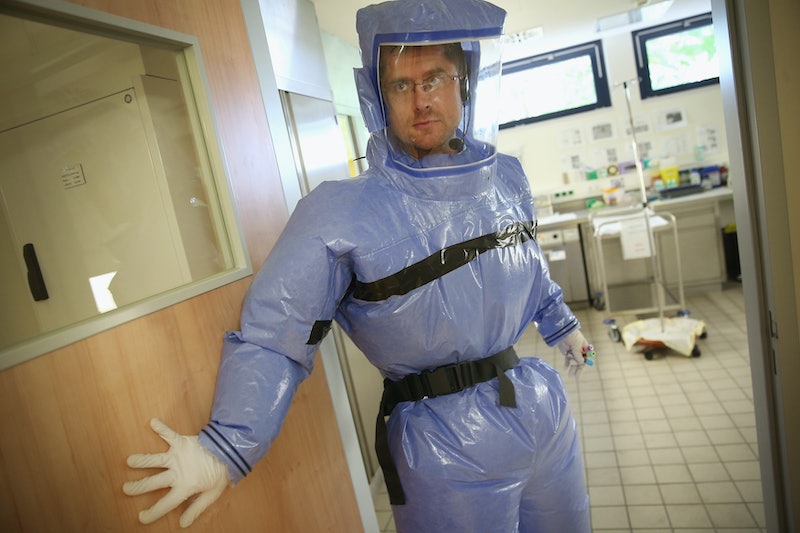 The National Institute of Health (NIH) announced Thursday that it will be treating an American Ebola patient, a healthcare worker who tested positive for the virus. The patient contracted the virus while volunteering in an Ebola unit in Sierra Leone and is being transported back to the U.S. in isolation via a chartered plane. The individual, unnamed at this time, will be admitted into NIH's hospital in Bethesda, Maryland, on Friday.

The patient will be treated in the NIH Clinical Center's Special Clinical Unit, designed for high-level isolation and staffed by infectious diseases and critical care specialists. This will be the second American treated for Ebola at the NIH Clinical Center. Nina Pham, who contracted the virus while treating the first patient diagnosed with Ebola in the U.S. and became known as the "Ebola nurse," was treated successfully at the NIH center and released disease-free in October.

The World Health Organization reported Wednesday that deaths due to the Ebola virus reached 10,000 worldwide, though most are from West African nations Sierra Leone, Liberia, and Guinea. This will be the 11th Ebola patient treated in the U.S. The last patient, Dr. Martin Salia, died November 15 at a Nebraska hospital and was the second to die from the virus in the States. Salia, a permanent U.S. resident, was a surgeon in Sierra Leone and his condition was already dire when he was flown back to the U.S.

The NIH released a statement verifying that the most recent patient will be treated at their Maryland facility and said that the staff is prepared to treat the virus appropriately. The statement on the NIH's website says:

The unit staff is trained in strict infection control practices optimized to prevent spread of potentially transmissible agents such as Ebola. In addition, access to the unit is strictly controlled. NIH is taking every precaution to ensure the safety of our patients, NIH staff, and the public.

The NIH, a component of the U.S. Department of Health and Human Services, is the nation's medical research agency. The Clinical Center where the Ebola patient will be treated is the clinical research hospital for the NIH, where laboratory work is done to discover new treatments, therapies, and interventions for diseases affecting the U.S. It's one of the small number of facilities equipped to handle such an infectious disease in the States.