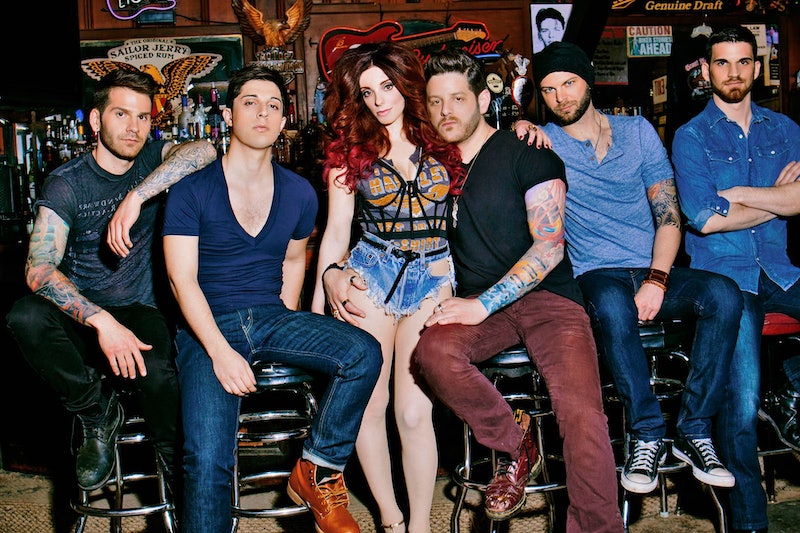 You may recognize Chevonne from Season 3 of The Voice . The former background vocalist was lauded by the coaches for her high energy and rocker vibes (and oh yeah, a wildly impressive set of pipes), and her post-reality television music career has been on the upswing. Her band, Chevonne and the Fuzz, released their EP Fire At Will last month, and it's definitely worth the listen.

We had the chance to chat it up with Chevonne over the phone, and holy cannoli, is she lovely.

Yeah, she and the Fuzz embrace an old school rock and roll image, but she is a far cry from the train wreck that is Stacee Jaxx. She is, as she says, the "rock mom" who is cool "by accident." Um, Chevonne, we don't think you can help being cool.

Chevonne and the Fuzz's beginnings date back to 2009 when Chevonne answered a Craigslist ad for a background singer/pianist for singer Chris Ricci's cover band. Over the years, she became acquainted with the future members of the Fuzz, and kept in touch while on tour with Lady Gaga and Estelle. Then, she went on The Voice, and afterward, she was determined to strike out on her own.

"I had all of these plans after The Voice to do the solo thing," she told me. "I called Chris [Ricci], Chris [Bookstaver], and Mike [Sarkissian] to be my backing band, and then Mike's brother, Steve [Sarkissian], our drummer. After that, we got to writing stuff together right away, and we almost immediately turned into a band."

The lineup evolved a little more: Steve left to work as a studio engineer, drummer Matt Graff replaced him, keyboard player Nick Potters was added, and they incorporated an extra guitarist Jay Tambor for live shows.

"We have seven people on stage at a time, but it really works," she gushes. "I know how bands can be. They can be very tumultuous … but I'm happy and excited there is no infighting whatsoever in our band!" Their unified front is represented on the "Fire At Will" cover: the bandmates, positioned among beat-up carnival game targets, remain unscathed. Chevonne explains, "That was like our little, 'come at us! See if you can knock us down, because we know you can never knock us down!'"

The band's sound is dynamic and fun, and Chevonne credits that to the varied musical tastes of members.

"[The EP] definitely developed organically … Everybody has their different little niche where they like to hang out musically, but we were all definitely of that [old-school rock and roll] mind … and we wanted to try in our own way, our own 2013 way, to pay homage to that, and try and resurrect it in a new and different way."

The unifying inspiration for the band: the Foo Fighters. "When we start writing a song, we always ask, 'What Would Dave Grohl Do?'," she says.

Chevonne speaks fondly of her time on The Voice, assuring us that, "It's okay to nerd out [about the show], because I nerded out when I was there." Her experience was very positive: "All people across the board on that show care about artists, they care about letting us do what we feel is right for us, creatively. They make sure that our backstories are true and real. Whatever we want to share, they make sure we're able to communicate that to the world, and that's why they won the Emmy for Best Reality Competition Show."

"It's okay to nerd out [about the show], because I nerded out when I was there."

The transition from The Voice to the real-life music industry wasn't too jarring for Chevonne, however. She remarks that her prior industry experience prepared her for it:

"I'd been on tour … and when the tour ends, you're home. You're back to the drawing board, you pick up where you started." She places a high value on remaining grounded and focused, stating, "[On the show] I was like, 'whatever happens, happens. Go with the flow. I'm going to use my newfound exposure and all the fan love that I'm getting to do something new … grow my career'."

She went on to share her optimistic yet pragmatic outlook with the younger, greener contestants, remembering, "[Avery Wilson] and I got really close, and he asked me a lot of questions about the industry … The first thing I told him was you have to stay yourself … The most important thing is that you're nice and you're good to work with." Chevonne lives by those words, it seems to be paying off!

If you're anything like us, you want to be BFFs with Cee Lo Green, and Chevonne only reaffirms this sentiment: "[My coaches Cee Lo and Christina Aguilera] definitely let us know that they cared about us for real, and they believed in our careers, and they do open up certain doors of communication where you can talk to them and let them know how you're doing."

So when the coaches claim they stay in contact with their artists, that isn't just for TV. She explains, "Even if they can't talk to us all of the time, they let us know that they're there." BRB, have to calm down after thinking about what it'd be like to have any of The Voice coaches as a support system.

What's next for Chevonne and the Fuzz? Their official website should be Internet-ready at the end of the month. Chevonne says in addition to band news, the site will feature "fashion posts and outfit of the day posts."

Fitting, given that she is a stylish lady and her biggest nerd-out on The Voice "was with the wardrobe department." Like we said, "cool" flows through her veins. Additionally, the band wants to shoot a music video for "Babysitter" (which has a perfectly campy, Scissor Sisters feel), go on tour, and record more songs. We're stoked to see where the future takes this incredibly talented, creative, and driven band.

You can check out Fire At Will on iTunes (trust us, you want to listen to this band). If you're in the New York area, the band will be playing the CMJ showcase at Tammany Hall on Oct. 16.

More like this
Twitter Is Upset About The 'American Idol' Top 3 Results: "Who TF Is Voting?"
By Jake Viswanath
Stormi Just Walked A Red Carpet With Mommy Kylie Jenner & Daddy Travis Scott
By Hugh McIntyre
How 2 'American Idol' Singers Performed With COVID-19 & Made It Into The Top 5
By Jake Viswanath
Will ‘Bling Empire’ Return For Season 3? Here’s What To Know So Far
By Kadin Burnett
Get Even More From Bustle — Sign Up For The Newsletter