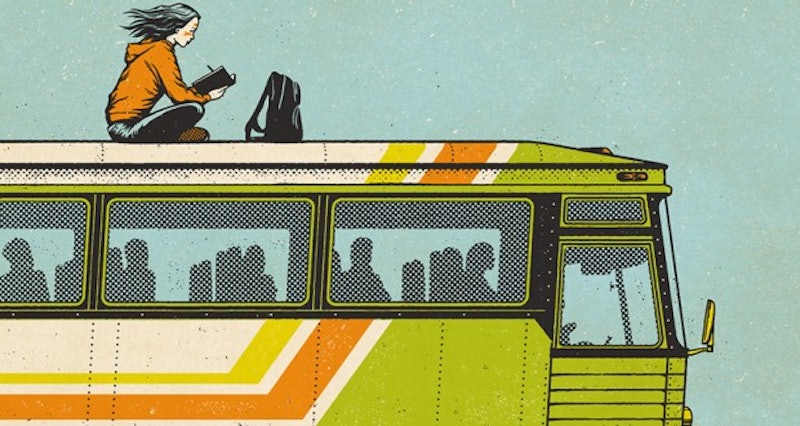 Even before Jack Kerouac hit Route 66 to travel across the country, there was something almost mythical about the great American road trip. There's the beautiful and hidden places you see and the quirky characters you meet along the way. David Arnold's debut YA novel Mosquitoland captures that feeling, and as a bonus we get to travel along with a seriously great female character who would have made even Dean Moriarty proud.

Not to sound too much like Stefan from Saturday Night Live, but this book has everything. Mim Malone has just been forced to leave her home in Northern Ohio to move in with her father and her new stepmom in Mississippi. But now, her mother is dying, so Mim takes off on a north-bound odyssey on a Greyhound bus to return to her home in Ohio and her mom. But over the course of 1,000 miles, Mim's trip takes all sorts of unexpected twists and turns, and she meets an entire cast of eccentric characters along the way. And it's just a pleasure to sit shotgun with Mim throughout.

Mosquitoland is heartbreaking and heartwarming. It's hilarious and sad. It's completely true to life and utterly surreal. And like all great road trips, there are a whole lot of surprises along the way.

Arnold himself has said that Lord of the Rings is probably the ultimate road trip book. But just in case you miss Mim and the open road, here are seven more YA road trip books that will inspire you to bring out your inner Kerouac.

The Disenchantments by Nina LaCour

Why they're road-tripping: Best friends Bev and Colby are making their way through the Pacific Northwest, one dive bar at a time, on tour with Bev's band The Disenchantments. After that, the two are Europe-bound for a whole year.

And the hiccup?: Well, Bev pulled a total friend faux pas and backed out of this amazing-sounding Europe plan at the last minute and deciding to go take off for college, leaving Colby and Bev on a much more awkward, stilted road trip than they previously imagined. It becomes a bit of a last hurrah for the pals.

But...: Colby is also secretly in love with his BFF Bev, so there's more than just friendship on the line here. Oh, and as expected, the road trip features a killer soundtrack.

And the hiccup: After an amazing (and very random) all-night adventure with the one Margo Roth Spiegelman, she vanishes, leaving clues behind that Quentin believes he must follow. So he and his pal Radar take off on a mission: An epic road trip to find the girl.

But...: Who is Margo really? (And don't worry, Paper Towns is already filming its movie adaptation.)

Why they're road-tripping?: After her father died in a tragic car accident, Amy is tasked with driving her car and stuff from California to her new home in Connecticut.

And the hiccup?: Amy's mom has nominated her friend's son Roger to tag along with her, who she hasn't seen in years. And what's more romantic than a road trip?

But...: So, things don't exactly go by Amy's mother's plan. Amy and Roger open up to each other about their feelings, about Amy's dad's accident and her brother's rehab, and soon they ditch the whole itinerary and go wild and free through the country, Kerouac style.

Let's Get Lost by Adi Alsaid

Why they're road-tripping?: Ostensibly, four people (Hudson, Bree, Sonia, and Elliot) all linked to a 17-year-old named Leila and Leila herself are heading to Alaska to witness the Northern Lights. And maybe smuggle some wedding rings across the Canadian border.

And the hiccup?: Leila doesn't exactly know know these people. Every stranger Leila meets on her way to Alaska, she influences in some way. Eventually these strangers join her on her road trip for their own personal reasons.

But...: Why is Leila on this road trip in the first place?

Why they're road-tripping?: 16-year-old Cameron finds out he's sick from Creutzfeldt-Jacob, or "mad cow" disease, and is going to die. So he takes off on a journey across America searching for the elusive cure from Dr. X.

And the hiccup?: Well, he heard about this cure from an angel, or possibly a hallucination, named Dulcie

But...: There's a video-gaming dwarf and a yard gnome involved, too.

Why they're road-tripping?: Harper's older sister June committed suicide two weeks before her own graduation, and she's driving cross-country with her best friend Laney to scatter June's ashes in California, where June always dreamed of visiting.

And the hiccup?: This trip wasn't exactly approved by Harper's parents. In fact, she stole the ashes and took off on the road.

But...: There's another stowaway on the road trip, and he might have some clues as to what made June do what she did.

Why they're road-tripping?: Teenage sisters Octavia and Tali are on a parent-mandated road trip with their grandmother Mare to attend a family reunion.

And the hiccup?: The girls quickly take off their headphones to hear Mare's account of her life story growing up in the deep South and how she escaped her tough childhood, lied about her age, and joined up with the African American Battalion of the Women's Army Corps to fight in World War II. Turns out, grandmother Mare is a lot larger than life than they may look.

But...: The book isn't just about a road trip, it switches back and forth between present day in the car and following Mare through her time in the WAC.