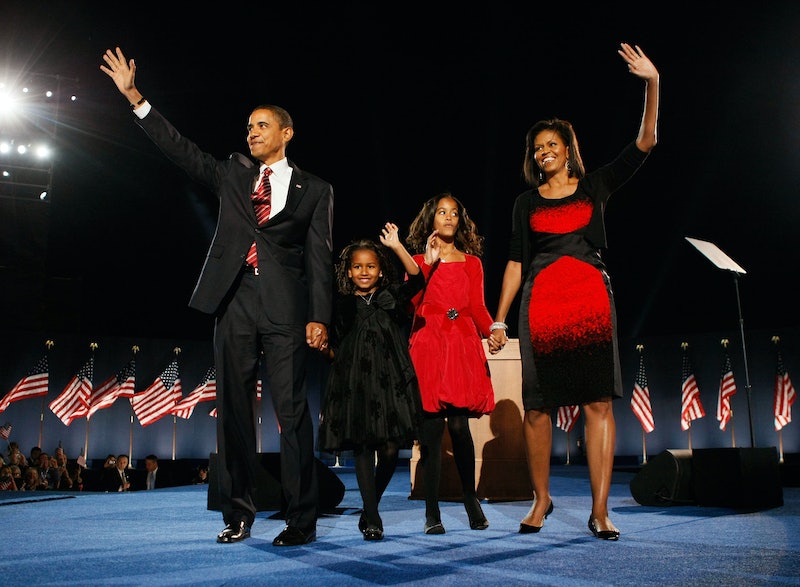 Thursday's appearance on Jimmy Kimmel Live wasn't the first time the late-night host interviewed Barack Obama, but it was the first time the president has appeared on Kimmel's set in person. The two first met up in 2008, when Obama was still a state senator from Illinois, and Kimmel was hosting ABC's pregame show before Game 5 of the 2008 NBA finals. The Associated Press reported at the time that Obama was jokingly trying to downplay an awkward bowling appearance from a few weeks earlier. "I hear there's a bowling alley and obviously that hasn't gone too well. So we're getting rid of the bowling alley and replacing it with a basketball court in the White House," he said.

But on Thursday, Obama was totally at ease, feeling self-assured enough to do one of Kimmel's signature sketches, reading Mean Tweets about himself. While he and Kimmel bantered about managing teenage daughters in the age of social media, and admitting he still uses a Blackberry (and got a shout out from one guy in the audience), it was interesting to contrast the candidate Obama with his presidential self, and see how his interaction with Kimmel has changed, so that he's the more comfortable person in the room.

During the 2008 interview, Obama declined to pick a winner for the basketball game (his beloved Chicago Bulls weren't playing in the finals that year). But in a nice bit of symmetry, he walked out on to the Kimmel stage to the band playing "Sweet Home Chicago."

Obama told Kimmel on Thursday that he still uses a Blackberry, presumably not the same one he used during his first campaign, when he proudly called himself the "First Blackberry President." (The reason he hasn't upgraded to an iPhone or other more sophisticated smartphone, he told Kimmel was because he can't have any phone with a listening device in it)

During both interviews, Obama talked about his family; the 2008 interview was in June, close to Fathers' Day, and he told Kimmel, "There's usually some experiment with waffles or pancakes. Usually I get a hall pass, which means that I might be able to play golf or play some basketball and goof off a little bit. And my wife is especially nice to me that day," the AP reported.

Now, though, the dynamic with the First Daughters has changed a bit, since they're both teenagers. "They have smartphones and they're texting their friends, and they're doing all the stuff that teenagers are doing," including social media, he said Thursday. "We try to emphasize to them they don't want to do anything to be on TMZ."

Although he's still the same person, with the same bits of humor and camaraderie with Kimmel showing throughout the two interviews, Obama clearly seemed more relaxed now that his tenure as president is nearly over. Granted, there's still a ton going on in the U.S. he has to deal with, but it's nice to see Obama feeling comfortable and at ease as Kimmel's guest.

More like this
What Is Barack Obama’s Net Worth? He Makes *Way* More Now As An Ex-President
By Hugh McIntyre
Celebrities & President Biden Are Enraged By The Leaked Roe v. Wade Decision
By Alyssa Lapid
What Is Jeanie Buss' Net Worth? The Lakers President Is Uber Rich
By Hugh McIntyre
Dinner To Celebrate Diversity In Journalism Brings Out Media Leaders
By Brianna Kovan
Get Even More From Bustle — Sign Up For The Newsletter