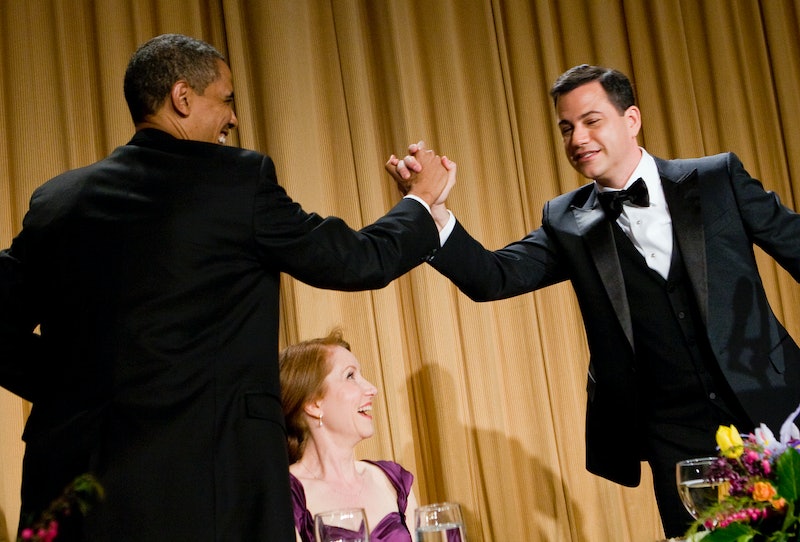 With just over a year left in his presidency, the leader of the United States has certainly found the time for some leisure activities in the last few months, drawing some negative attention for his seemingly lax personal vacation policies and penchant for sunbathing and golf. And now, in the ultimate exiting-office-YOLO move, Obama will be appearing on Jimmy Kimmel Live on Thursday evening, giving a highly anticipated second interview to the famous talk show host. This will be the first time Obama has appeared on the program as the sitting president — the last time he and Kimmel chatted on live television was during the 2008 campaign. But a lot has changed in the last seven years, and the two should have plenty to talk about. So why exactly is Obama appearing on Thursday?

According to Kimmel, the commander-in-chief has long planned on paying the late night show a sophomoric visit, but due to scheduling issues, has been forced to cancel previous engagements. This time, however, it seems that the president will indeed be sitting in Kimmel's hot seat, but the 47-year-old host made sure to make room for potential last-minute hiccups. In an interview with The Daily Beast, Kimmel noted, "Hopefully this time he’ll make it here and be on, but we’re always prepared for the possibility that something will prevent that from happening." While it is unclear what Obama's agenda is for appearing on the show (after all, he's out of the running for 2016), Kimmel will certainly relish the opportunity to ask the leader of the United States a manner of typically outlandish, Jimmy Kimmel-esque questions. The host himself noted that his interview would include plenty of "the nonsense that I’m inclined towards."

Interestingly enough, the Brooklyn native told The Daily Beast that the White House has made no attempt to censor or pre-screen any of his questions — the interview, for all intents and purposes, will be entirely organic, and will feature all the joys of live television. In fact, Kimmel says, interviewing politicians is much more genuine than interviewing Hollywood celebrities:

There’s much less pre-planning in an interview with the president or any politician than there is with a celebrity. I think that politicians—and rightly so—understand that they work for the public and that they’re required to answer any appropriate questions that they’re asked. It’s actually easier in that respect to interview politicians than celebrities.

Of course, despite the comedic nature of the program, Kimmel assured viewers that there would be some substantive content as well. "The way I look at it is as long as I ask questions that I’m genuinely interested in hearing the answer to, I think I’m in good shape," he told The Daily Beast. “I’m not going to pretend to be an expert on foreign policy, or health care, or any of those things. But we will definitely get into stuff that is a little more serious."

But serious or not, Kimmel has no doubts that the president will put on a good show. After all, this is the man who braved Zach Galifianakis, and dare I say, even out-funnied The Lone Wolf himself in what is surely the best Between Two Ferns episode to date (well, let's be honest, I love all of them). Jimmy Kimmel, at least, is a fan of Obama's humor, calling him the most intentionally funny president in recent memory. "[Obama’s] definitely the most intentionally funny president of my lifetime," said Kimmel in his interview. “It’s tough to beat President Bush for sheer physical comedy, though." After all, who can forget Bush's failed attempts at opening the doors during his ill-fated visit to China?

While this would be Obama's first trip to Jimmy Kimmel Live during his presidency, he is certainly no stranger to the late night circuit, and has appeared on The Tonight Show and Late Show, as well as Jimmy Fallon's Late Night. He also very recently helped Stephen Colbert close out The Colbert Report in a rather unforgettable appearance during which he made a number of jokes at his own expense, saying, "Remember the original healthcare.gov website? I think that's where Disney got the idea for Frozen." Well played, Mr. President, well played.

As one of the most technologically and media-savvy presidents to date, Obama has long relied on the Internet and social media to broadcast his message and garner support, revolutionizing the use of text messaging, Twitter and Facebook during both his 2008 and 2012 campaigns. His State of the Union addresses have also depended heavily on outlets like YouTube, and Obama also has a long history of giving less traditional interviews (to YouTube stars rather than well-reputed primetime anchors). So it comes as no surprise that as the president rounds out of his presidency, he is doing so in true Obama-fashion — with a bang and on live television, with Jimmy Kimmel Live.

More like this
What Is Barack Obama’s Net Worth? He Makes *Way* More Now As An Ex-President
By Hugh McIntyre
Yes, Billboard Queen Angelyne Really Ran For Governor Of California
By Brad Witter
Watch Benedict Cumberbatch Lead An ‘SNL’ Medieval History Lesson On Roe v. Wade
By Grace Wehniainen
Playing A Scrub Nurse On 'Grey’s Anatomy' Made BokHee An Instagram Royalty
By Brad Witter
Get Even More From Bustle — Sign Up For The Newsletter