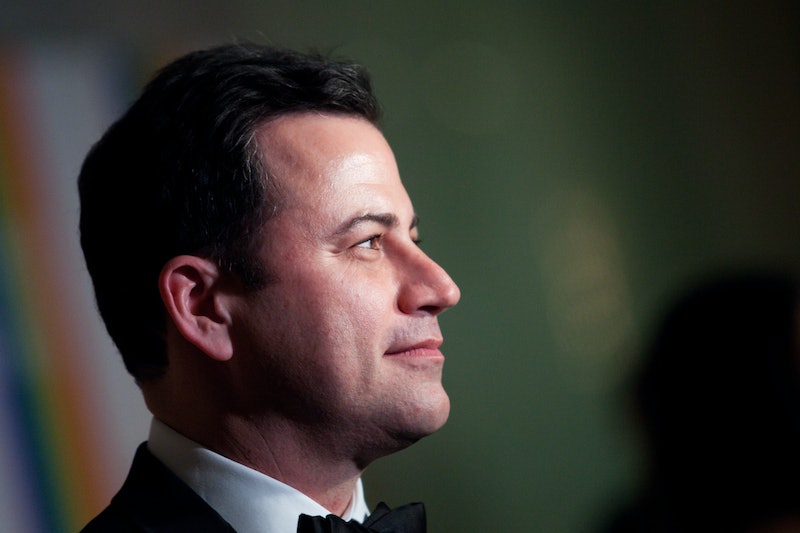 Despite the cordial tone of their interview on his show, host Jimmy Kimmel didn't shy away from taking jabs at President Obama and making jokes at his expense, even going so far as to introduce him as the "first Kenyan-born, Muslim socialist ever elected president," a reference, of course, to the many things voters assumed incorrectly about the president. Remember the birthers who insisted the president was born in Kenya? And of course, there were the misguided voters who were wary of voting for a Muslim (even though Obama isn't Muslim). The president even wisely declined to give Kimmel Hillary Clinton's email address (yes, Kimmel went there).

Here are a few of Kimmel's best one-liners about the president and some of his funnier questions for the Commander in Chief.

"This morning I got a letter from 47 Republicans telling me not to sign any deals with him. So I guess that peace agreement with Matt Damon is off."

"Part of the reason that President Obama is here in town tonight is to do fundraising: He's very serious about helping Sasha and Malia sell all their Girl Scout cookies."

"I always wondered what it must be like when the president and the first lady watch "Scandal" together. Like, if there's a scene where Fitz [the president on the show] cheats on his wife, does the president have to look at Michelle and go 'boo! I don't like that at all!'"

On the guests of the night

On the best fictional president

"We've never had a sitting president on the show. We've had former presidents: we had President Clinton.. was Morgan Freeman president, or was that a movie...?"

"Can you run down to the kitchen in your underpants in the middle of the night if you're hungry?"

(The president answered "I could, but I don't.")

"Did you see 'Fast Times at Ridgemont High?'" Kimmel asked, in a nod to his other guest on the show, Sean Penn. Obama replied, "I lived it, man."

"Are you having conversations with Kanye?" (I love his music, but I don't think I've got his home number," the president said.)

Kimmel also asked the president to do something about the length of receipts at CVS. But there are some things that might just be beyond even the president's control.

More like this
What Is Barack Obama’s Net Worth? He Makes *Way* More Now As An Ex-President
By Hugh McIntyre
Yes, Billboard Queen Angelyne Really Ran For Governor Of California
By Brad Witter
10 Times Diana & Meghan Spoke Similarly On The Royal Family
By Sophie McEvoy
How To Support Gun Control Reform Right Now
By Morgan Brinlee and Carolyn Steber
Get Even More From Bustle — Sign Up For The Newsletter