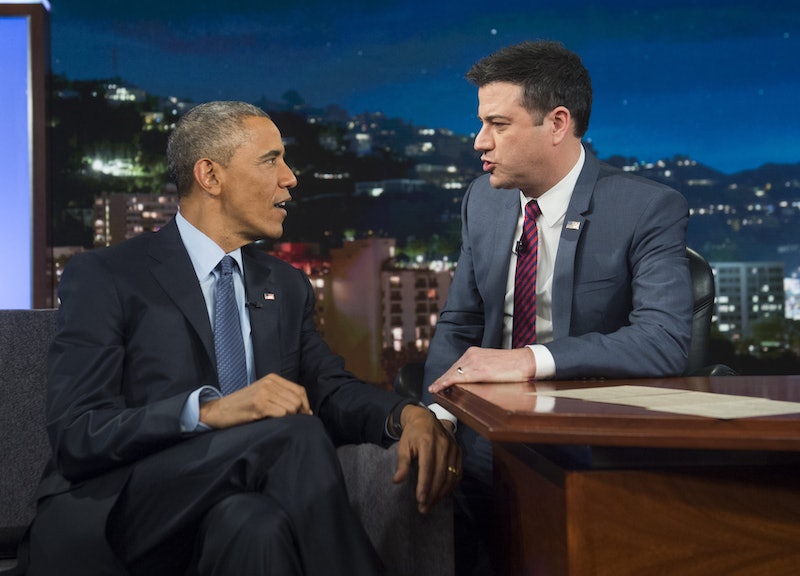 One of the biggest concerns for many students and graduates these days is how the heck we're supposed to pay off these huge loans we have. President Obama recently announced a Student Aid Bill of Rights that would help indebted students gain power and knowledge in understanding information about student loans. And though the average student loan debt is $28,400 per undergraduate, that barely even accounts for those who attend college out of state or those who go on to obtain a master's, law, or doctorate degree. Seriously, the amount of money you have to spend to get a job can be insane, something Obama recognized in his appearance on Jimmy Kimmel Live on Thursday night.

Obama said, "Everybody understands that the economy is now based on your skills, your knowledge," going on to say that the reason America is the economic superpower it is today is because of how we have things like universal public high schools and the GI Bill. But he also recognized that more needs to be done. He told Kimmel:

We have the best trained workforce and young people understand that; the problem is its also becoming more and more expensive. What we’ve said is in addition to the work we've already done … make student loans cheaper, expand pell grants, set up a repayment program who want to go into a teaching or helping profession [to make sure they] aren’t priced out of it because they have to pay off student loans.

And though he mentioned his proposal to make college more affordable and provide the first two years of community college for free to all Americans, Obama also answered one of the most important questions many alumni have: What about existing student loans for those of us who have already graduated from college?

One of the things we’re doing there is to try to help them refinance, because a lot of them took out loans … 15 years ago when interest rates were a lot higher.

So, Obama said, he wants to help graduates refinance their loans and lower the costs, the same way you might with a mortgage, but the way student loan rules are right now don't allow for that. Kimmel expressed surprise that it wasn't already an option to do that, to which Obama replied: "Hang around me, you’ll learn something." And, of course, Kimmel was quick to retort, "But you won’t let me hang around you!" Well, Obama said, maybe after a pat down.