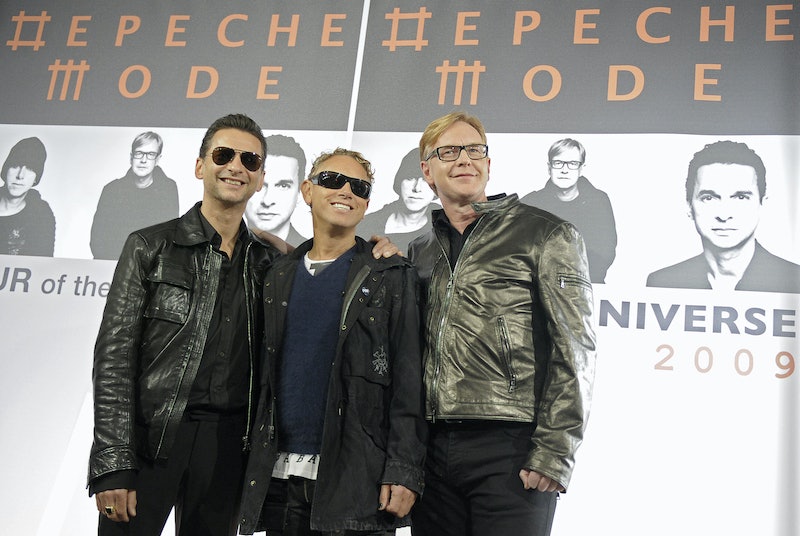 Depeche Mode has always been there when I needed them. When I had a lonely and uncomfortable transition to high school, I sought comfort in the song "Policy of Truth." Five years later, I was heartbroken, confused, and alone again (naturally). And that's when I rediscovered the song and Depeche Mode when the remastered 15th anniversary edition of Violator was released in 2005, along with their the-just released album Playing the Angel. I might be biased, but Violator still stands up. There's something so comforting about the English band's moody synth jams, but not all of the tracks are created equal — so I decided to rank 'em.

Originally released in 1990, Violator launched Depeche Mode into the mainstream with hits like "World in My Eyes," "Personal Jesus," "Enjoy the Silence," and, my personal favorite, "Policy of Truth." Rolling Stone named the album as one of the 500 greatest albums of all time. "Violator, that was our time," band member Andrew "Fletch" Fletcher told Under the Radar . "Every big band has their time. I still think Violator is our best album but I also think the other albums aren't too far behind. We do okay, and for a band that's been around for a long time, I feel we're still quite relevant."

Formed in 1980, the band consisted of lead singer David Gahan, Fletcher, Martin Gore, and Vince Clark for Violator. Let's take a closer look at the band's best album, with its tracks ranked from best to better than the rest.

After what I said above, you might think I'd put "Policy of Truth" at the top, but you would be wrong. While that song means a lot to me personally, "Personal Jesus" is by far the best and catchiest on Violator. I dare you to listen to this song without dancing and singing along, and even if you don't think you know the lyrics, trust me — you do.

"Personal Jesus" is one of Depeche Mode's biggest and most recognizable hits and was certified gold in the U.S.

Here it is. Now, this wasn't the biggest single for Depeche Mode, but it still peaked at No. 15 on the Billboard Hot 100. The dark catchy track was recently covered by Richie Cohan featuring Lindsay Marcus and used in the trailer for the Jeff Bridges movie Seventh Son .

In my opinion, the best cover is actually by Dishwalla and the best remix by far is the Capitol remix, which 8 minutes long, but totally worth it. The remix opens with the words "Let me tell you my side of the case" — sampling a speech by none other than former President Richard Nixon.

This song was Depeche Mode's other certified-gold hit from Violator and has been covered by Lacuna Coil, Tori Amos, and Susan Boyle. In 2004, Mike Shinoda of the band Linkin Park "reinterpreted" the song for the Depeche Mode's Remixes 81-04 album and it's pretty kickass.

"World in My Eyes"

This is widely known as Fletcher's favorite song, because of how well it came together when recording it. "World in My Eyes" also did well upon release — It reached No. 6 on the Billboard dance charts and made it to No. 17 on the UK Singles chart. The track has been covered by The Cure and Sonata Arctica.

"Waiting for the Night"

Originally known as "Waiting for Night to Fall," the song title was shortened due to a printing error on the album. This unreleased track is slow, sparkly, and sad, making you want to curl up with a blanket and contemplate your life into the depths of the night.

This one's got nothing to do with Beyonce's hit of the same name and the intro sounds a lot like Michael Jackson's "Bad." The tune begins, "You wear guilt like shackles on your feet / Like a halo in reverse," and continues talking about how even if things fall apart, it'll all be worth it in the end.

Usually Depeche Mode sings about heartbreak, but this is their rare ballad — and it's very sweet. The lyrics plead for a woman to put on the titular blue dress, because it's the one simple thing that'll make the singer happy. "Because when you learn / You'll know what makes the world turn," say the lyrics.

The band rocks out a little more on this guitar-heavy tune that starts off its lyrics with the name of the song right away. "The sweetest perfection / To call my own / The slightest correction / Couldn't finely hone," say the lyrics in a song about wanting something (Love? Lust? Drugs?) so bad.

Remember the days of secret tracks on albums? Because before iTunes, you could totally get away with hiding hidden tracks and interludes. "Crucified" is the first hidden track on Violator, and it's super dark. Its whispy background noises and moody guitar swirl the short minute-and-a-half interlude that leads into "Policy of Truth."

This song has a guitar riff and vocal tone reminiscent of "Personal Jesus," but it's not quite as catchy.

Give Violator another listen for its 25th birthday. You won't regret it.