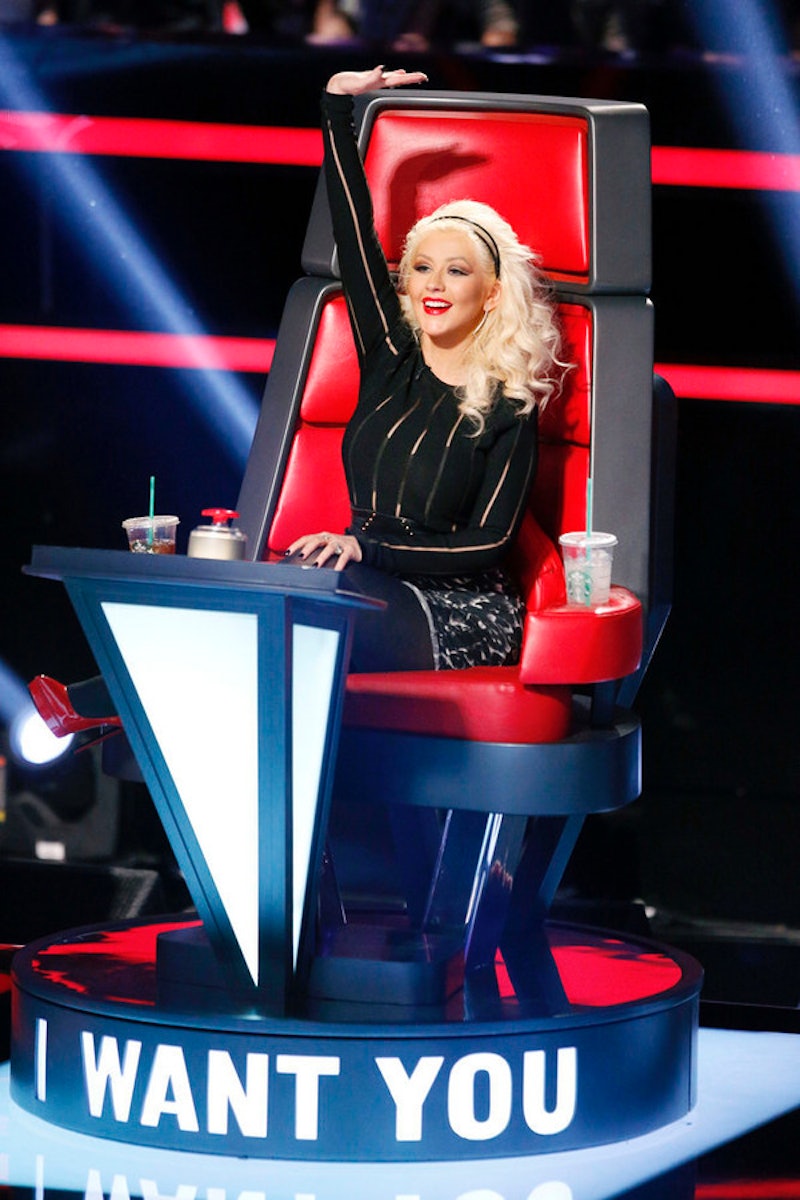 Recently, I've become a total The Voice addict. I rush home from work on Mondays and Tuesdays to watch established musicians Blake Shelton, Christina Aguilera, Adam Levine, and Pharrell Williams coach amateurs through a tough — but incredibly engaging — singing competition. I still have no idea exactly when or how I first got sucked in, but I did and now I just can't get enough of Shelton and Levine's antics, Williams' confident coolness, the awesome celebrity guest advisers, and, of course, the amazing unknown-but-soon-to-be-known voices. Though No Doubt's Gwen Stefani was a fun addition to last season, I have to say, it's so good to have Christina Aguilera back in that red chair on The Voice .

The 34-year-old diva, known for her incredible voice and hits "Genie in a Bottle," "Beautiful," and most recently, "Say Something" (with A Great Big World), is one of the original coaches and has been with the NBC singing series since its premiere in 2011. Aguilera has taken breaks from The Voice in Seasons 4 and 6 — in the fourth season, she wanted to focus on her own music career, and she didn't appear last season due to her pregnancy. "Our coaches have their chairs for life," producer Mark Burnett said. Which is why Aguilera is back and better than ever.

I think the energy has certainly changed with the return of the singer and it's definitely making this season a must-see, because Aguilera just brings so much to the stage. Here are all the reasons I'm so glad that Xtina's back on The Voice.

Her Contagious Excitement When She Gets The Singer She Wants

There's nothing like hearing Aguilera's little squeal when a singer chooses her as their coach during the Blind Auditions. It's hard not to be happy for — and with — her.

Her Unabashed Love For Strong Voices With Range

Aguilera has an incredible voice of her own, so it's understandable that she can't resist other amazing vocalists who knock it out of the park.

Xtina always shows up with her own snazzy sense of style, whether it's a classic white T-shirt and jeans, or wacky colors.

Speaking of style, Aguilera's hair always shocks and surprises — in the best possible ways. She proves there's always a new way to wear your hair.

When She Breaks Out Her Own Incredible Voice

Her Stellar Performances With Other Singers

From singing with Maroon 5 on the hit song "Moves Like Jagger" to a duet with Lady Gaga, Aguilera's own stellar voice goes fantastically with every singer on the planet.

When She Wears Her Heart On Her Sleeve

It's so good to have you back, Xtina.

More like this
Iris Law's Skunk Mullet Is Not For The Faint-Hearted
By Tomi Otekunrin
Kim Kardashian Reacts To Kanye West’s Diss Song “Eazy” On 'The Kardashians'
By Jake Viswanath
Britney Spears Met The Weeknd & Sam Levinson, So She May Actually Be On 'The Idol'
By Jake Viswanath
Twitter Has Very Mixed Feelings About The New 'American Idol' Winner
By Jake Viswanath
Get Even More From Bustle — Sign Up For The Newsletter