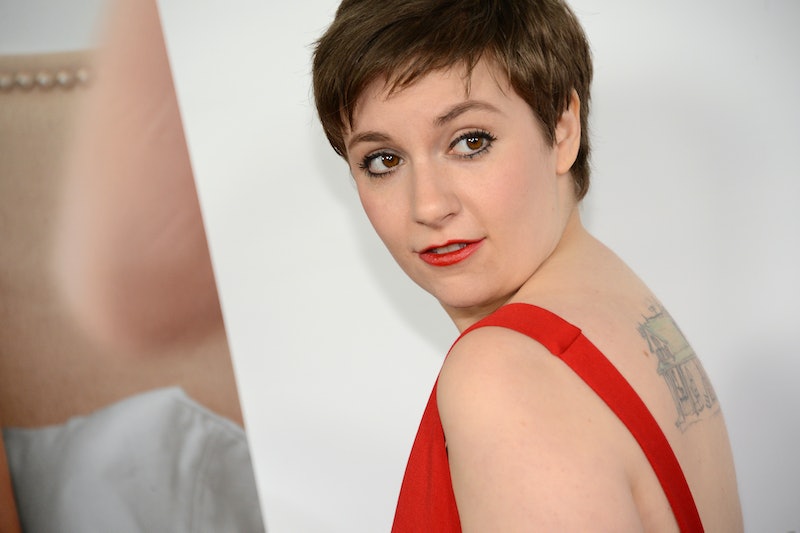 We should have known that they would choose to market it like this, but it was still a pleasant surprise when Thursday's episode of Scandal concluded with a promo for the upcoming episode featuring Lena Dunham. As we all know, Dunham will appear on Scandal as a woman who is writing a tell-all book of Washington sex secrets — but, apparently, she and Olivia Pope have crossed paths before. Even better, as the Scandal promo starring Dunham shows, this is all getting more than a little Fifty Shades of Grey. Or, rather, as the voiceover puts it: "Everyone is in for Fifty Shades of Scandal." Um, yes, please.

But we're getting a little ahead of ourselves here. Unlike the first photos of Dunham in her role as Kinky Sue (no, really), the promo shows a more fresh-faced country bumpkin when Olivia first runs into her. That's what leads me to believe that OPA's next case might actually be the second time that Olivia has ever tangled with this particular woman. The stark contrast between the sharply-dressed Dunham that appears in the OPA offices and the pigtailed, easily excitable Dunham that opens the door to see Olivia standing there is too great for them to not exist in two different time periods.

Thus, this promo brings all kinds of intrigue to this plot line. Has Olivia had to protect Fitz from the likes of Dunham before? How many chapters of that Fifty Shades of Grey: The Washington DC Edition book are entirely devoted to the president? Clearly, from the fight that David and Abby seem to be having, some of those chapters are devoted to David Rosen as well. And, more importantly, why is Dunham doing all of this? I suppose we could just wait for her multi-episode arc to conclude before we find out, but I want to know now.

The clip does all it can to build upon the kink and scandal inherent in this book that OPA needs to shut down as quickly as possible, but all I see is our first look at Dunham on Scandal. If the rest of her arc goes like this, then I'm already excited to watch every second of it.

More like this
Watch Benedict Cumberbatch Lead An ‘SNL’ Medieval History Lesson On Roe v. Wade
By Grace Wehniainen
Sandra Bullock, Girlboss Extraordinaire
By Matt Harkins & Viviana Olen
Spice Girls’ Net Worth: The Richest Member Is Wealthier Than The Rest Combined
By Hugh McIntyre
Cardi B Explains To David Letterman Why She Uses Her Star Power For Politics
By Jake Viswanath
Get Even More From Bustle — Sign Up For The Newsletter