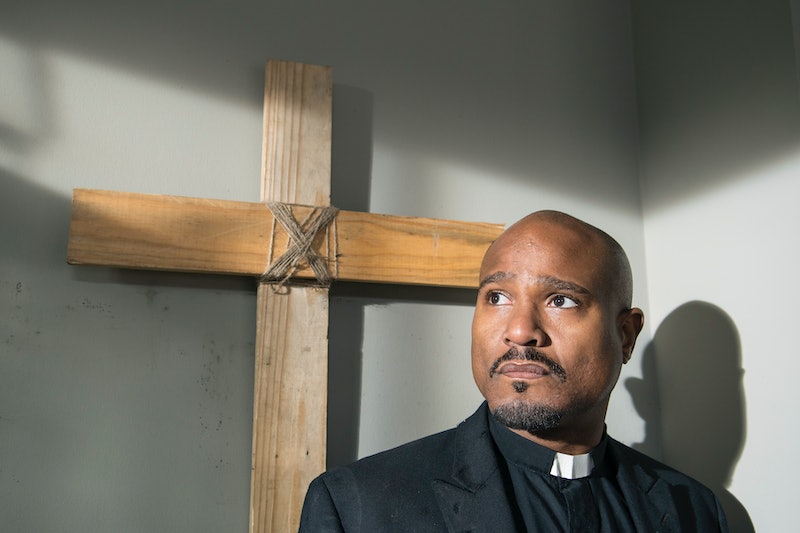 With Deanna of the Alexandria Safe-Zone handing out job assignments to the group on The Walking Dead , Father Gabriel seems like he'd be a shoo-in to become the community's spiritual advisor. But we haven't seen much of the priest in Alexandria, so where is Father Gabriel? Now, I'm not a huge fan of Father Gabe (although I won't go as far as to say he's my least favorite character). Not only did he let his parishioners die by zombies while he stayed huddled up in his church, but he's also just a wimp that almost got Michonne and Carl killed. But since he was introduced in Season 5, there has to be a point to his character, right?

Based on the promo video shown at the end of the March 8 episode and photos from AMC for the March 15 episode "Spend," Father Gabriel will get some screen time again. In the midseason premiere, he said a prayer at Tyreese's grave, but since then he's been a pretty passive survivor. Now, Father Gabriel isn't the only member of the gang not to be getting a lot of coverage since the Season 5 midseason premiere — and it looks like "Spend" is trying to remedy that, considering this clip AMC posted of the episode which features Tara and Eugene.

Gabriel will most likely be shown leading the religious services in Alexandria, but I hope he doesn't start condemning Rick like his comic counterpart does. Although he may be the voice of morality, fans of the show know his very immoral past and he shouldn't be too hard to judge how people handle the insanity that is the zombie apocalypse.

It's lucky for Father Gabriel that the group found a community, since I can't imagine him being great at surviving on the road. Now the rest of Seth Gilliam's The Wire alumni have been killed off of The Walking Dead (Chad Coleman's Tyreese and Lawrence Gilliard Jr.'s Bob both died in Season 5), so could that mean a similar fate for Father Gabriel? That would seem pretty unfair, and hey — just because they were on the same show together years ago does not mean they should all share the same fate on TWD.

I don't think Father Gabriel will die, but that doesn't mean he is necessarily safe of all outside evils. In the promo video for the last three episodes of Season 5, he quotes a passage from the Bible (2 Corinthians 11:14) and gives it his own spin by saying, "Satan disguises himself as the angel of light. That false light will destroy everything. A day will come."

Whether that false light is the Alexandria Safe-Zone, or something else, I do not know. But I do know that it's an ominous message for the rest of the season — and something bad is bound to happen. So, thanks for the warning, Father Gabe!