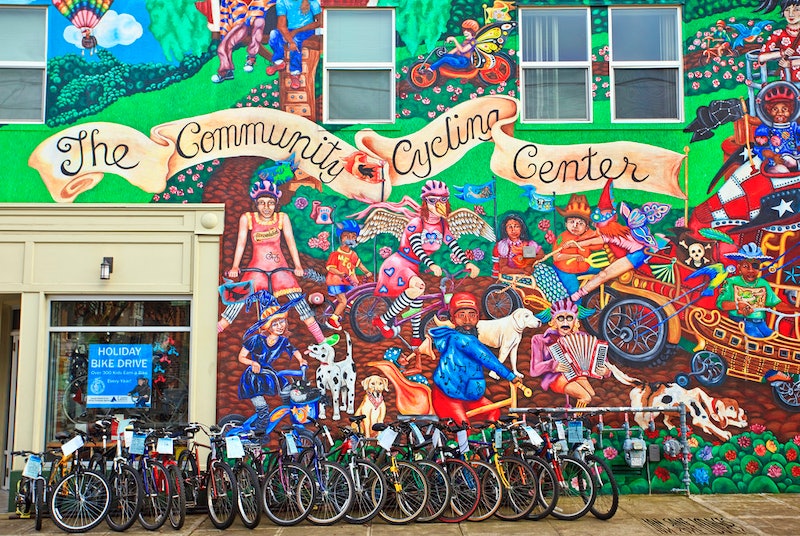 Travel and Leisure's America's Favorite Cities survey is pretty a never-ending source of fascinating information about the state of the United States (see what we did there?). This time, they've scoured their data in order to rank the quirkiest cities in America — because let's face it: It's way more fun to be a little weird than it is to be perfectly straight-laced. Sometimes you've just got to let your hair down, y'know?

T+L had their readers rank 38 cities for everything from how romantic they were to the quality of their thrift shops; then they arranged the results in a handy dandy list featuring the top 20 kookiest cities in the country. What really makes a place quirky, though, comes down to one thing: The people who live there. Whether they're the folks who come up with the idea to run a bar that holds armadillo races as a regular occurrence or the folks who give that bar that holds armadillo races as a regular occurrence their patronage, the people really do make the place. So if you want to have some adventures, meet some colorful characters, and walk away with a story or two to tell, these are the places you'll want to go.

Check out the top 10 below; you can see the complete list over at Travel and Leisure.

New Orleans is certainly one of the most unique cities in America; I can't think of any other place that's quite like it. T+L cites its “jubilant funerals, voodoo shops, and seemingly nonstop festivals” as three of the biggest reasons it wins the top slot; the site also recommends trying a NOLA Social Ride to experience all the city's quirks in a relatively safe and secure fashion.

Not going to lie: I kind of expected Austin to take the number one spot. Second place isn't so bad, though, and it's definitely a weird and wonderful place (“keep Austin weird,” right?). It's the home of Shiner Bock, Alamo Drafthouse cinemas, a bar called Javelina that hosts live armadillo races, and Sfanthor, a recently-opened wax museum that celebrates the sci-fi, fantasy, and horror genres. Definitely my cup of tea!

Of course the hipster mecca that is Portland would take one of the top three spots on the list. T+L recommends checking out the store MadeHere PDX for everything from “mustache wax... [to] a wood-and-leather six-pack holder for cyclists” — in addition to tasting the craft beer and delicious coffee, of course. I'd also recommend checking out the Shanghai Tunnels if you're into spooky (although possibly embellished) history.

Ah, Providence! There are a lot of amazing cultural events that happen there on a regular basis — and I'm not just talking about the Trinity Repertory Theatre. T+L notes that the Big Nazo Theater's giant puppet plays and the Extraordinary Rendition marching band are always worth a visit; Providence also has its own unique take on the humble hot dog, so go hog wild (sorry) if you feel like it.

There's more to New Mexico than just Breaking Bad, but according to T+L, ABQ Troley's Bad Tour is apparently still worth checking out. Albuquerque also boasts a faux-meth-sprinkled donut at legendary bake shop Rebel Donuts, as well as the Hotel Parq Central, which was once a psychiatric hospital. And did I mention there's a balloon festival?

San Francisco's exorbitant rents might be pricing a lot of people out of the city these days — but if you can afford it (or nearby Oakland, which might not put such a huge hole in your pocket)? Treasures await! In addition to scoring in the top five for T+L's wine bars and cocktail lounges category, there's also loads of history and art to be enjoyed.

If you're wondering from whence Kathy Bates' accent in American Horror Story: Freak Show hailed, Baltimore's your town. Come to think of it, the city has a number of different pop culture lenses through which to view it: John Waters (who, according to T+L, picks up his fan mail at Atomic Books), The Wire, and more. Oh, and don't forget about the Edgar Allan Poe House, too. It may not be open at midnight, but it's still worth a visit when it's dreary out.

I've never been to Missouri, so alas, I can't speak to personal experience; T+L, however, recommends visiting the 1950s All-Electric House for a vintage look at what people once thought the future would be, as well as the Arabia Steamboat Museum. Grab a coffee from Oddly Correct while you're at it.

Although T+L notes that “the Washington locals did not light up the survey for being friendly,” there's loads to keep you busy here. There's a nude bike ride during the summer solstice; a restaurant where dogs can keep you company at your table (Norm's Eater & Ale House); and of course Pike Place Market for all your specialty food needs. If you don't mind getting a little corporate and chain-y while you're there, you can also visit the first-ever Starbucks, as well as the Reserve Roastery and Tasting Room.

You kind of have to move off the beaten path in order to find the bits of New York that are still super quirky — but as long as you stay out of Times Square, there's loads to see. From the Coney Island Circus Sideshow to the Elevator Historical Society (which I just learned exists, thanks to T+L), there's a little something for everyone. Apparently it also ranked number two for people watching in T+L's survey, so you're also guaranteed to have a good time just settling at an outdoor cafe or wine bar and watching the passersby… well, pass by.