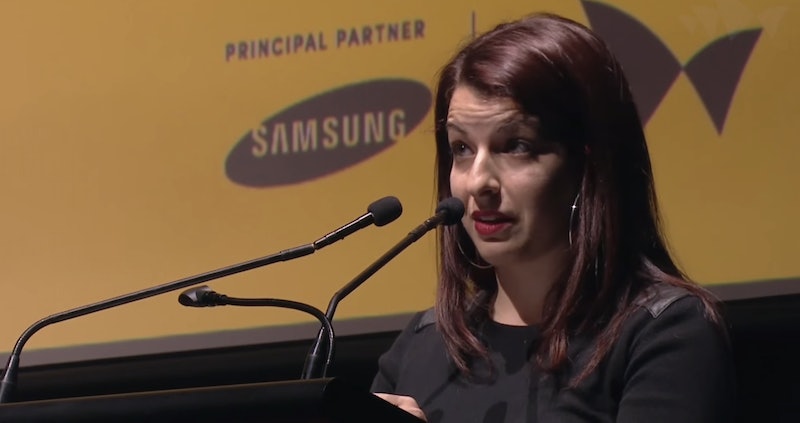 What does it feel like when an anonymous, digital mob descends? Think about it: If you were the focal point of a maelstrom of harassment, abuse, conspiracy theories and bad-faith "criticism" online, just imagine how that might change your life. That's the situation that feminist pop-culture critic Anita Sarkeesian has found herself in for more than two years now, and as part of the Sydney Opera House's 2015 "All About Women" series, Sarkeesian opened up on the matter. So, what is it that Anita Sarkeesian couldn't say to her critics? Two words, in this order: "Fuck you."

Since launching her "Tropes vs. Women in Video Games" YouTube series in 2012, Sarkeesian has been the regular, damn near ritualistic target of an obsessive (and, it must be said, almost universally misinformed) klatch of gamers, hell-bent on refuting her entirely reasonable, well-spoken and engaging criticisms of their hobby. She's gotten countless death threats and rape threats (you can sample a week's worth of threats that she made public here, though obviously they come with the mother of all trigger warnings), bombing and mass shooting threats, you name it — all because she had the temerity to voice an opinion that some (largely male) gamers didn't like.

It's enough to make you want to put a fist through the wall as an observer, much less the person experiencing it. Which is why Sarkeesian's explanation is so compelling and important — she talks about the toil of suppressing her emotions, fearful of being slandered with age-old gendered stereotypes about hyper-emotional, hysterical women.

What I couldn't say is "fuck you." To the thousands of men who turned their misogyny into a game, in which gendered slurs, death and rape threats are weapons used to take down the big bad villain, which in this case is me. My life is not a game. I've been harassed and threatened for going on three years with no end in sight. And all because I dared to question the obvious, self-evident sexism running rampant in the games industry.

If you have the time — and at only five minutes, I hope you do — this is a great watch, in spite of being deeply saddening at the same time. People are people, for all our rich diversity, and there are some awful experiences that should really trigger people's empathy. The effect of having to adapt one's life to ceaseless harassment and threats — "screencap, forward to the FBI, block, and move on," as she says — sounds about as toxic as anything.

It's especially galling considering that the gendered stereotypes people heap onto Sarkeesian are in fact pretty applicable to her critics themselves. I won't mince words here: if you want to talk hysteria, GamerGate is the source of as much hysterical garbage as you'll find on the internet, as well as those proto-GamerGate "critics" who've been attacking her for years. It's nice to know, at the very least, that Sarkeesian finally did get to say the only comprehensive response to all this.

Images: Ideas At The House/YouTube