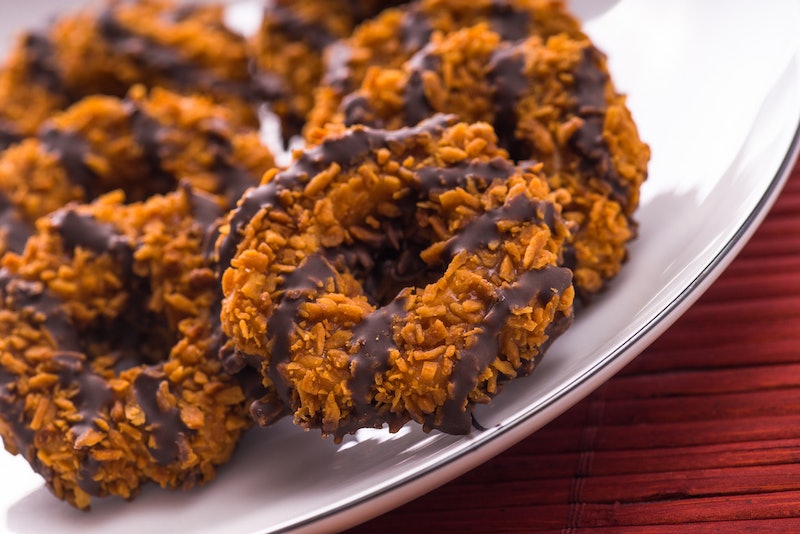 Big news if you happen to live in the Bay Area: San Francisco brewery Woods Beer Co.'s Girl Scout Cookie beers have returned — and the date of their triumphant comeback is today! Every year around this time, Woods, which consists of three operations these days (Cerveceria and Polk Station in SF, and Woods Bar and Brewery in Oakland), releases their Girl Scout Cookie–inspired brews to the great delight of adult baked goods and beer aficionados everywhere. This year, though, something a little different is going on: They've added handmade “Local Merit Badges” to the mix. According to the Woods official site, “We've embroidered a series of patches to honor the special skills of Bay Area beer fans like you. Stay tuned to our Instagram account and follow the hashtag #cookiebeer to see the badges in the wild, then stop by any Woods location this Friday to earn your own Cookie Beer patch, and purchase your favorite local merit badges.” Sounds fun!

As always, the five beers on offer (which, by the by, aren't officially licensed, so do with that what you will) include the following: Samoale, a coconut caramel brew inspired by Samoas; Brew-ski-do, an oatmeal peanut butter beer similar to Do-si-dos; Beerfoil, a shortbread-esque beverage based on the humble Trefoil; Hopalong, a chocolate peanut butter beer inspired by Tagalongs; and Thick Mint, a chocolate peppermint brew that takes its cues from — what else? — Thin Mints. For the curious, the Merit Badges include the Hashtag badge:

And the Karaoke badge:

According to Eater, the alcohol-fueled Girl Scout Cookie celebration kicked off last night with a preview party; they go on tap at noon at Polk Station and Cerveceria and 4 p.m. at Woods Bar and Brewery. Bottles will be around, as well. Be warned, though: Even though Woods apparently brewed more this year than they did last year, they're likely to sell out by the end of the weekend. Act fast if you want 'em!

Not located anywhere near San Francisco? I feel your pain — I'm clear across the country. But hey, even if we can't indulge in Girl Scout Cookie–flavored beer today, at least we've got a few other options. One, you can put together your own Girl Scout Cookie booze pairings; and two, you can check out these other baked goods-inspired beers:

Confession: I actually had a pint of this last weekend, and I found that it did not, in fact, taste like funnel cake. It was still pretty tasty, though, so if you're able to nab a taste from this Cherry Hill, New Jersey–based brewery, go forth and do it.

According to reviews on Beer Advocate, this porter tastes of chocolate cake, vanilla icing, brown sugar, and a dash of coffee. One user called it “birthday cake in a cup,” which essentially means it's all my favorite things in one beer. P.S. If you want to make a “the cake is a lie” joke, go right ahead. I won't stop you.

Shipyard makes some of my favorite seasonal brews (its pumpkin ale is delicious). Although it might not be gingerbread season anymore, though, if you can find a bottle of this stuff? Grab it. Grab it before someone else does. Don't let it go until the bottle is empty and you've finished the last drop.

This one might be a little hard to get a hold of unless your local liquor store imports relatively obscure Belgian brews — but if you can find it, Ecaussinnes Cookie Beer is basically cookie butter beer. According to Belgian Beer Discovery, speculoos biscuits provide the cookie-like burst of flavor in this cinnamon-laced amber beverage. YES PLEASE.