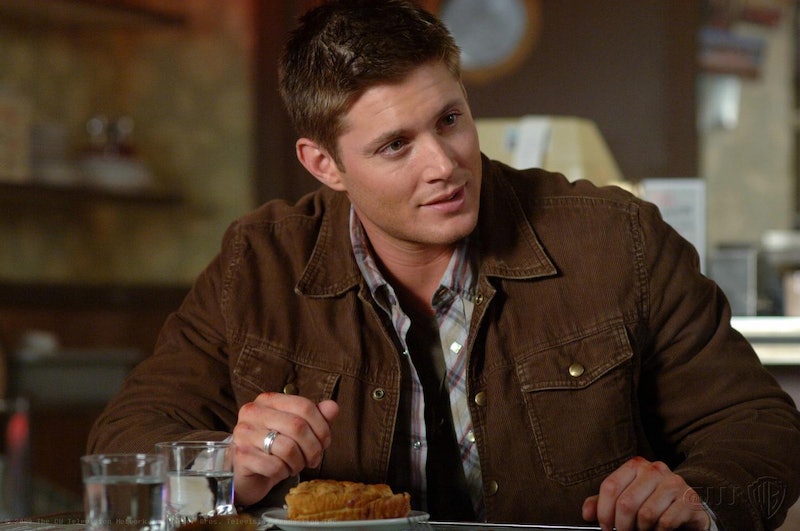 I know I'm wading into some pretty tricky waters here, but I like to think that the violent fights that broke out in the fandom over whether one is a Dean Girl or a Sam Girl have calmed down. After all, it's best to just be a Winchester Girl. However, being a Winchester Girl doesn't change the fact that there has always been one Winchester that I just plain like better than the other. Sam is great and all, and I'mma let him finish, but Dean Winchester is the best Winchester of all time. (Well, OK, not of all time because Mary Winchester is a boss, but still.) My love for him began in the Supernatural pilot and has only climbed as I followed him through some high highs and some really, really, really low lows.

Dean has always stood in contrast to Sam as the funnier, more carefree, more street smart one, but, to be honest, Dean and Sam have picked up so many of each other's traits by necessity that it's hard to characterize either one that way. They've both been funny, both taken turns being carefree, and they're both pretty street smart. Dean, though. He's Batman. He usurped Sam as the main character somewhere around Season 4. And he is now and always will be my favorite Winchester brother.

Here's why that is.

1. He Takes Care Of Everyone

Dean takes his job as a caretaker very seriously. As hard as it may be to believe considering he's technically the "reckless, carefree" one, Dean is actually the heart of the show. Sam is usually the sensitive one, but do you know which brother has talked not one, not two, but four of his loved ones out of mind controlled rampages of violence and death? Yeah, that's right. One look at Dean's anguish and John Winchester, Sam Winchester, Bobby Singer, and Castiel all managed to overcome possession so as not to hurt him further. And don't even get me started on Dean with a child!

2. He Gets The Funniest Lines

This is just a given. Sure, Sam can really bring the snark, but Dean uses humor both for fun and as a defense mechanism to keep people from looking too closely into his issues. No matter what's going on, Dean will find some way to make it hilarious in a rambunctious way entirely different from anything Sam or Castiel or Charlie could say. I mean, really. This is the man who described being a vessel for Michael the Archangel as being an "angel condom." Dean Winchester's middle name is actually One-Liner, you guys.

3. He Never Gives Up

If I had to deal with even a portion of what Dean has to deal with every week, I would literally have collapsed on the ground and given up. Even Sam quit being a hunter and gave up on looking for Dean in one memorable season. But there is absolutely nothing that can break Dean's spirit for longer than half a season, tops. He's dealt with the death of everyone he cares about, his own death, the numerous times the world almost ended, and just about every piece of emotional trauma you can possibly put a human being through — and he's still leading Team Free Will on every mission to save the world.

4. His Relationship With The Impala Is Everything

You have never loved anyone the way that Dean loves his car. Let's be real. The Impala is just straight up cool. But even cooler is watching the way that Dean takes painstakingly good care of her, repairing her when she's been banged up, yelling at Sam for sticking an iPod converter cord into his car while he was dead (again), and talking to her more gently than he would any lover. The Impala might be an inconsistent character in the Supernatural verse nowadays, compared to the earlier seasons, but it will always come back and it shows a softer side of Dean that's a joy to watch.

5. His Relationship With His Brother Is Everything Else

However, not even his love for the Impala compares to his love for his younger brother, Sam. From when they were children to the modern day, from being on opposite sides of a celestial war to abandoning one another for petty reasons, there's not a single thing that can damage the love between Sam and Dean for very long. Dean has proven that he cares more about protecting Sam than he cares about saving the entire world — and, OK, he can do some pretty awful things in the name of "Sam's own good," but, I mean. No one ever said the Winchesters were healthy.

From Season 4 straight up to the current season, Dean has had to deal with the fact that his mother wasn't kidding when she said that angels were watching over him. In fact, he's befriended one specific angel, is the vessel for another specific angel, and has met so many angels ranging from cute and friendly to completely psychotic that I'm sure Dean is way over the whole angel thing by now. Especially after he was a demon for a while. Still, that doesn't change the fact that Dean Winchester is literally touched by angels, which is supposed to be a good thing.

He made his own EMF meter out of a Walkman and spare parts about the house. He made his own sawed off shot gun when he was a kid. He can repair his car, make a fake ID, and pick his way out of handcuffs with ease. Sure, all of these are life skills that every hunter should have, but they don't look nearly as cool as when Dean does it.

LOOK AT HIM. Bye.