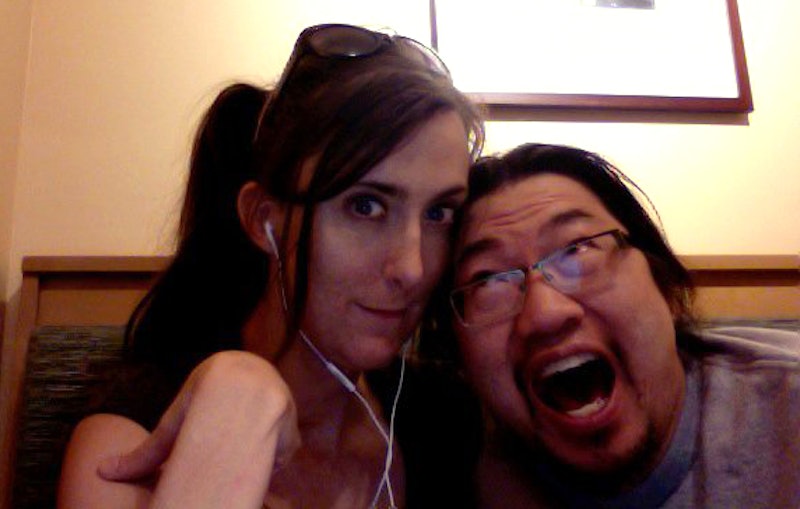 This weekend, a man wearing a skull mask posted a video on YouTube outlining his plans to murder me. I know his real name. I documented it and sent it to law enforcement, praying something is finally done. I have received these death threats and 43 others in the last five months.

This experience is the basis of a Law & Order: Special Victims Unit episode airing Wednesday called “Intimidation Game.” I gave in and watched the preview today. The main character appears to be an amalgamation of me, Zoe Quinn, and Anita Sarkeesian, three of the primary targets of the hate group called GamerGate.

My name is Brianna Wu. I develop video games for your phone. I lead one of the largest professional game-development teams of women in the field. Sometimes I speak out on women in tech issues. I’m doing everything I can to save my life except be silent.

The week before last, I went to court to file a restraining order against a man who calls himself “The Commander." He made a video holding up a knife, explaining how he’ll murder me “Assassin’s Creed Style.” He wrecked his car en route to my house to “deliver justice.” In logs that leaked, he claimed to have weapons and a compatriot to do a drive-by.

After the crash, he sent me a deranged video that Jezebel called “bizarre" and "terrifying.” Sam Biddle of Gawker said that if this happened to him, he’d be “locked in a closet rocking back and forth.” For me, it’s just another Tuesday. My capacity to feel fear has worn out, as if it’s a muscle that can do no more.

The Law & Order character based on the three of us eagerly wants to push past the death threats and launch her game. The reality is, this circus has sucked every bit of joy from a career I once felt destined for. Zoe recently Tweeted a picture of a vending machine with a sign: "The light inside is broken, but I still work." There’s not a single day I don’t ask myself why I’m here, and why I keep doing this.

Software increasingly defines the world around us. It’s rewriting everything about human interaction — I spend a lot more time on my iPhone than I do at my local civic center. Facebook, Apple, Tinder, Snapchat, and Google create our social realities — how we make friends, how we get jobs, and how mankind interacts. And the truth is, women don’t truly have a seat at the table.

This has disastrous consequences for women that use these systems built by men for men. I must use Twitter, as it's a crucial networking tool for a software engineer, yet I must also suffer constant harassment. Women’s needs are not heard, our truth is never spoken. These systems are the next frontier of human evolution, and they’re increasingly dangerous for us.

When Twitter is completely ineffectual at handling harassment — it’s because women don't truly have a seat at the table in running it. We don’t have a voice. They tell us they're going to do better.

When Wikipedia’s highest ruling board chooses to discipline only feminists — it’s because nine out of 10 of its editors are men. They tell us they're going to do better.

Amazingly, the field of video games is the most misogynistic area in all of tech. One writer of Ubisoft's hit franchise Watch Dogs angrily denied that Gamergate was a hate group, calling such statements a "smear tactic" and an "obvious lie." During the reign of terror of Gamergate, I have had hundreds of conversations with other women. We’re exhausted, we’re terrified we’ll be next, we’re all thinking of quitting.

I have a folder on my hard drive with letters from dozens and dozens of women who’ve abandoned their dream of becoming game developers due to Gamergate, some as young as 12.

You’d hope that the gaming press would provide some sort of check on the unrelenting sexism in the game business, but the truth is, they’re complicit in creating our Gamebro culture. One of our largest gaming sites, IGN, has written one single, weak article addressing Gamergate where they don't even mention it by name. I wish I could say I was surprised, but this is the site that advertises itself as "broverload."

All this horror begs the question — what can be done?

Fortunately, this isn’t something that requires us to boil the ocean to solve. Here are four easily achievable things that can be done immediately.

Firstly: For the last year, Reddit has had a female CEO named Ellen Pao. She has also struggled with high-profile sexism. Ellen, you have a hate group operating on your site called Kotaku in Action, creepily called KiA. This lunatic fringe of gamer doxxers who slanders us creates a culture that is making it impossible for us to do our jobs. Before this piece ran, I reached out to Pao, who said she wasn't ready to talk about any plans publicly. I am calling on Pao and her Reddit admins to stop letting this hate group operate on their site.

Secondly, there have been no prosecutions for the hundreds of death threats that have been sent to Zoe Quinn, Anita Sarkeesian, or myself. I am calling on law enforcement, specifically the FBI, to step it up. This will not stop until you show the public that there are consequences to these illegal acts.

Thirdly, many of the most serious harassers have committed criminal acts — doxxing us, repeatedly threatening to murder women and attempting to blackmail me and other women. Yet they keep creating new accounts and coming back to harass us. Dick Costolo, we need Twitter to work with us to ban them when they create new accounts until you can develop better tools. If Twitter reaches out to me, I'd be delighted to help the with names of specific people breaking their TOS.

Lastly, I am calling on the Obama administration to arrest and prosecute Fredrick Brennan, the owner of 8chan. 8chan doesn’t just host child pornography, it also runs Baphomet, the most hardcore doxxing and swatting site on the Internet. It's time for Brennan to face justice.

Just before this piece went to print, I became aware of a federal judge's private information being shared on Brennan's platform, and I'd like to share what I know with law enforcement.

Invariably, by speaking up, I’ll experience a new round of threats and harassment. The people doing this see themselves as noble warriors, not criminals. I’ll probably get more rape and death threats. I'll be told I'm being dramatic. For pointing out the game media's silence, behind closed doors these people will tell themselves what amazing allies to women they feel they are, and nothing will be done.

As a friend recently told me, “It’s a very dangerous time to be a woman with an opinion.”

The stakes couldn’t be higher. Do we fight this battle now, or do men get to be the only ones shaping our future? I’m doing my part — you can do yours by sharing this piece, and helping me hold these institutions accountable.